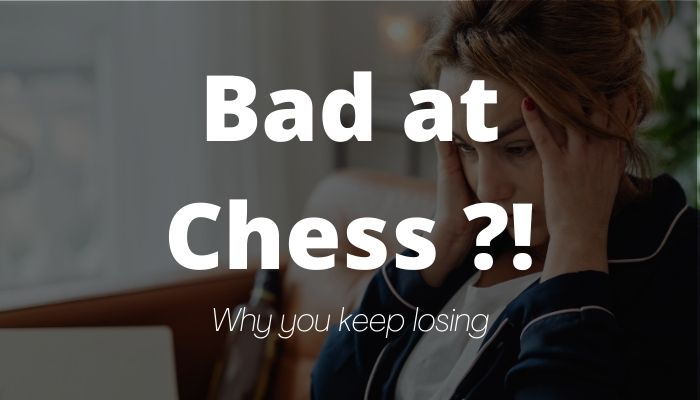 Although chess can be incredibly fun, it can also be extremely frustrating from time to time.

Especially if you lose several games in a row and you start to feel like you will never win a chess game again, you might start to wonder: “why am I so bad at chess?!”

Learning how to play chess and become good at the game can be a long journey.

Let’s look at 8 reasons why you might be losing your games and how to become better at chess.

The fastest way to lose a game is to fall for a simple tactical combination and lose a piece.

To start losing less games, you’ll need to learn the basic chess tactics such as forks, pins, skewers, etc. and practice them by solving lots of puzzles.

You can start by reading my article on simple chess tactics.

Improving your tactical prowess will not only prevent you from losing pieces, but it will also help you to win your opponent’s pieces!

2. Playing too fast or too slow

Learning how to use your time efficiently can be tricky.

Many beginner make their moves almost instantaneously with little to no thought. Only to realize seconds after making a move that they make a mistake.

Make sure to use plenty of time double check your moves before making them.

On the flip side, you don’t want to think too much and lose on time either.

If you are having trouble with time, consider playing a slower time control.

Blitz and bullet chess are a lot of fun to play, but not the best for improving.

Sometimes you haven’t lost any pieces, but it still feels like you are in a bad position. That’s probably because you made some positional mistakes during the game.

Fixing positional mistakes is often very difficult. So you’ll have to deal with them for the rest of the game.

And losing material is often an indirect consequence of having a positional disadvantage.

Knowing some basic chess strategies will help you to prevent making positional mistakes.

Read my article on chess strategy for beginners for more information.

4. Play without a plan

Finding the right plan in a position is tricky. But making random moves is often worse than following a bad plan.

Moving your pieces around without any purpose gives your opponent all the time they need to achieve their own plan. And that’s rarely good news for you!

If you don’t know what to do in a position, try to find the worst piece in your position and move it to a better square.

Or identify the weaknesses in your opponent’s position and see if you can attack them.

Nothing feels as bad as making a bad moving in the opening and regretting it for the rest of the game.

By learning a few openings you can be sure you don’t make any big mistakes in your first few moves and you can save a lot of time as well.

Grandmasters often prepare 20 moves or even more of opening theory. And once the game begins, they can play all their opening moves just from memory.

Of course, as a beginner you don’t need to memorize all the different opening or prepare the first 20 moves. But a little bit of opening preparation can make a huge difference.

You want to have a basic idea of what position you are aiming for even before making your first move on the board.

Besides memorizing move orders of specific openings, also make sure to know and understand the basic opening principles that apply to any opening.

If you are looking for a good opening to pick up, I recommend you start by reading my article on e4 openings and d4 openings.

Most beginners completely skip over endgame theory. And I get it…

As a beginner most games will be decided by some tactical combination before reaching the endgame.

But if your opponent doesn’t give up despite being a piece down, you still need to know how to convert your advantage into a victory.

Endgame theory is a super broad topic, and even many grandmasters still struggle with complex endgames.

As a beginner you should start by learning with which pieces you need to checkmate your opponent and how to checkmate with them.

Additionally, it’s definitely worth looking into some basic pawn endgames. So you’ll get a feel for which endgames are winning, drawing, or losing.

7. Playing infrequently or too little

You can study chess as much as you want, but can only practice what you learned by playing games.

If you really want to improve in chess, you should play at least a few games per week. And preferably play longer time controls.

If you don’t have a lot of people around you that like to play chess, you can always try playing online. For example through chess.com or through one of the many other websites.

As a complete beginner, you can improve a lot by simply playing more. But as you progress, you want to try and implement the things you studied into your games as well.

8. Not analyzing your games

You’ll often lose games without really knowing what you did wrong. But as long as you don’t know why you lost, you won’t be able to improve.

That’s why it’s important to write down your chess moves and go over your game afterwards.

You can try out different moves and variations that you considered during the game. But by playing them on the board you can check if you missed something or made a bad decision somewhere.

Moreover, if you use a chess engine or ask a stronger player to take a look at your game, you can learn a lot from their feedback as well.

Losing a game of chess is never fun. Especially if you lost due to a stupid mistake.

Fortunately, there are many ways to improve in chess. And with practice and dedication, I believe anyone could get a rating of at least 1500.

Use this article to identify which mistakes you make most frequently, and try to improve that one first.

For more information, you can also read my article on how to win at chess or why chess is so hard.