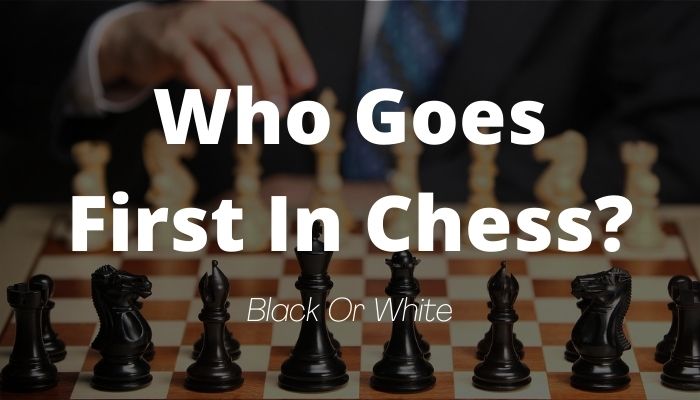 Once you have learned how to set up a chess board, how all the chess pieces move, and when the game finishes, it’s time to start your first game!

The only question left is who starts moving first?

In chess, the light-colored pieces always go first. So if you have a chess set with black and white pieces, the white colored pieces make the first move.

Let’s see why this is the case, and if it even matters who makes the first move.

Why does white start in chess?

When chess first came to Europe, there was no rule specifying which color would get to make the first move.

As far as we know, the British master Johann Löwenthal was the first to suggest that white should always make the first move during the first American Chess Congress in 1857.

But it took till 1880 before this became an official rule in the Code of Chess Laws during the fifth American Chess Congress.

This idea was then further popularized across the world by the first world champion Wilhelm Steinitz, who wrote in his book that “the players draw by lot for move and choice of color. In all international and public Chess matches and tournaments, however, it is the rule for the first player to have the white men.”

Does it matter who goes first in chess?

If you play with the white pieces, you get the first move advantage. Meaning that theoretically you will always be one move ahead of your opponent.

However, the first move advantage is rather small and converting it into a victory is no simple task.

If you lose a tempo due to a slightly inaccurate move, you can lose your entire advantage.

So it’s no surprise that for average chess players the first move advantage is nice to have, but won’t be enough to guarantee a win.

If you take a look at a large chess database, you can see that the average win rate is 55% for the white pieces and 45% for the black pieces.

This means you have roughly a 5% higher chance of winning if you play the white pieces, but a draw is the most likely outcome with correct play.

The first move advantage is considerably more important for strong grandmasters and super grandmasters that make almost no inaccurate moves.

These elite chess players normally aim to win with the white piece and will be content with a draw when playing the black pieces.

Whereas average chess players try to win with both the white and black pieces.

How do they decide who goes first in chess?

Since white always makes the first move, the real question should be: who gets to play with the white pieces?

For individual matches, the white player is normally decided by chance.

One of the players could hold a black pawn in one closed fist and a white pawn in the other. The second player can then choose a first and play with the according color.

During tournaments and competitions, the organizer will try to give everyone the white and black pieces an equal number of times.

Some might look at the first move rule and criticize chess for being a racist game. Why does white always get to move first?!

A few years ago, the world champion Magnus Carlsen and the 4th highest ranked player Anish Giri raised awareness around this issue through their #MoveForEquality campaign.

When the first move rule implemented in the 19th century, there was indeed a lot of systemic racism in western countries.

However, as far as I know, there isn’t any direct evidence that shows that the motivation behind implementing this rule was rooted in racism.

And not much has changed since the MoveForEquality campaign. So it’s unlikely that FIDE will change the chess rules any time soon.

Of course, there has also been plenty of backlash from other strong grandmasters that consider it a nonissue and a waste of time.

The famous old world champion Garry Kasparov suggested people pick up Go instead of chess if they are worried about who moves first.

The white player always gets to move first in chess. However, who gets to play white is normally decided randomly.

If you play in a tournament, the organizer will normally try to let everyone play the white and black pieces an equal number of times.

Playing the white pieces and making the first move gives you a small advantage and increases your chances of winning by roughly 5%.

There is little evidence that shows that the white moves first rule was introduced due to racism.

If you want to learn more about chess, you can read my articles on how to set up a chessboard and on how to move all the pieces.