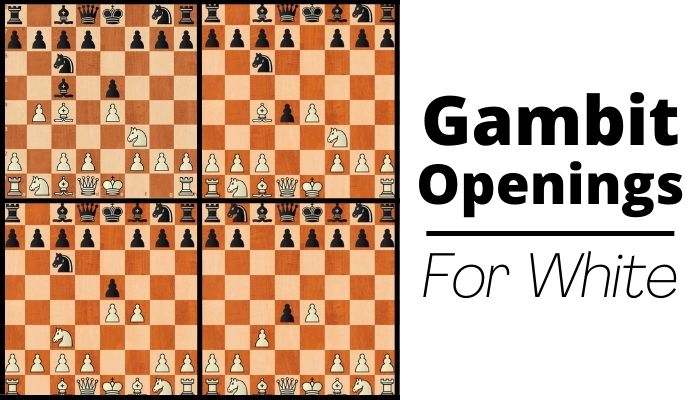 Gambit openings are a great choice if you like to play aggressive chess or want to surprise your opponent.

Although you don’t see gambits very often on the grandmaster level, they can still lead to great results for the average player.

Of course, not every gambit is theoretically sound and quite a lot of them have been refuted by strong chess engines.

So here are the five best gambits for white that I believe to be great openings for anyone at the beginner or intermediate level.

Throughout this article, I’ll use algebraic notation and centipawn evaluations. If you aren’t familiar with these, consider reading my articles on how to read chess moves and the centipawn first.

The b4 attacks the black bishop, which is a threat that black can’t ignore.

If black decides to accept the gambit, the game normally continues with the moves 4. … Bxb4 5. c3 Ba5 6. d4, after which the Stockfish engine evaluates the position to be roughly -0.20.

In exchange for the pawn, white ends up with a strong center (pawns on c3, d4, and e4) and opens the a3-f8 and b3-f7 diagonals for the bishop and queen to start attacking the black king.

The bishop can retreat to b6 or e7 if black doesn’t want to accept the gambit. In that case, the game could continue with moves such as 4. … Bb6 5. a4 a6.

This allows white to take control of a lot of space on the queenside and Stockfish gives white an advantage of roughly 0.5 in this position.

Below you can find a recent game played by two strong grandmasters that gives a good impression of the Evans gambit.

White attacks the central d5 pawn with the f pawn, but also opens the e1-h4 diagonal towards its own king, leading to very double-edged positions.

In the resulting position, white has a nice grip on the center with the d4 and e4 pawns. Meanwhile, black also gained two dangerous pawns on f4 and g5 that one day may form the springboard for an attack on the white king.

Both white and black have winning chances in the position. But Stockfish seems to clearly favor black with an evaluation of -0.60.

Black can also ignore the gambit and continue the development of the pieces by playing moves such as d6, Bb4, or Bc5 which all lead to playable positions.

Below you can find a crazy game from the 2009 world blitz championship.

The Scotch gambit is a very aggressive opening, in which white gets a large development lead if black accepts the gambit.

The pawn could have been won back immediately with Nxd4, but white opts to give it away for piece activity.

Although white is down a pawn, it’s very easy for white to quickly develop the pieces from this position with moves such as 0-0, Ba3, Qb3, or Qd5. And Stockfish evaluates this position to be roughly -0.20.

Black can also decline the gambit by playing either playing Bc5 or Nf6 on the fourth move.

Note that you can’t take the pawn with 5. … dxc4 in this variation due to Bxf7+ and Qd5 on the next move with a double attack on the king and bishop.

Stockfish gives white a tiny advantage in this position of 0.10, which means black can accept or decline the gambit without any problems.

Below you can find an example game in which the Scotch gambit was played.

The Smith-Morra gambit is a great way to avoid most of the Sicilian opening theory and play an exciting game of fighting chess instead.

The gambit appears on the board after the moves 1. e4 c5 2. d4 cxd4 3. c3. White gives away a second pawn instead of recapturing the pawn on d4 directly.

The accepted Smith-Morra gambit normally continues with the moves 3. … dxc3 4. Nxc3 Nc6 5. Nf3 d6, after which white gets a lead in development and control over the open c and half-open d files.

The engine gives black a small edge in this position, with an evaluation of -0.28.

If black doesn’t want to accept the gambit by taking on c3, there are a lot of other moves to choose from. The most commonly played moves according to opening theory are g6, Nf6, and d3.

But according to Stockfish, other normal moves such as d5, e5 or Nc6 are also completely fine to play.

In this position, white has a small advantage of 0.20 according to Stockfish.

Below you can find an exciting game of the Smith-Morra gambit accepted.

The Danish gambit occurs on the board after the moves 1. e4 e5 2. d4 exd4 3. c3. Similar to the Smith-Morra gambit, white is trying to give away the c pawn for a lead in development.

But in this case, black is giving up the e pawn instead of the c pawn.

The engine prefers black in this position with an evaluation of -0.29. But black will have to make several accurate moves to defend white’s attack.

Black can also decline the gambit by playing Nc6, Ne7 or d5 and end up with a very even position.

For example, the game can continue with moves such as 3. … d5 4. exd5 Qxb5 5. cxd5 Nc6 6. Nf3 Bg4. Stockfish evaluates this position at 0.03 which means it is almost completely equal and both sides have chances of winning the game.

Below you can a game between two strong players that will give a good impression of how to play the Danish gambit.

My favorite gambits for white are the Evans gambit, Vienna gambit, Scotch gambit, Smith-Morra gambit, and the Danish gambit.

In most of these gambits, white get very active play and fast development if black decides to accept the gambit.

Although the engine might give slight preference to black in most of these gambit lines, for the average chess player it’s not that easy to survive these gambits over the board.

If you like to play gambits, you might also want to check out these gambits for black.

For more classical openings, you can also read my articles on e4 openings and d4 opening.