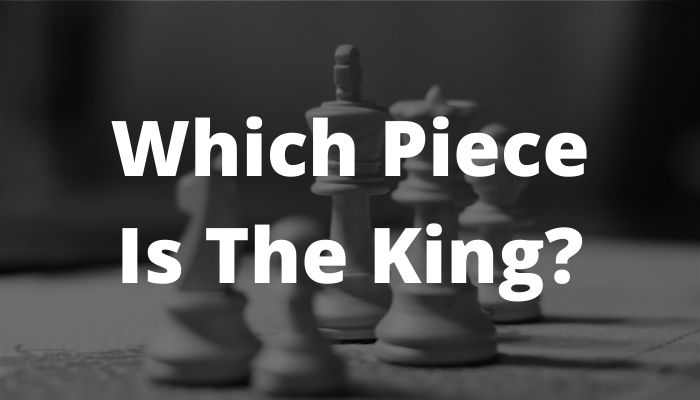 Each player starts a game of chess with 16 chess pieces. And the goal of the game is to checkmate your opponent’s king, while keeping your own king safe.

But doing so is quite difficult if you don’t know which piece is the king.

In some chess sets, the king and queen can look very similar, and recognizing which is which isn’t always easy.

In a standard chess set, the king is the largest piece on the board. According to the FIDE and USCF regulations, the king should be 9.5 cm or 3.7″ tall.

So to find the king, you can line up all the pieces and see which piece is the tallest.

Normally, you can also recognize the king by the cross on top of the piece, which is unique to the king.

Below you can see what the king looks like in three different chess sets.

How to tell the difference between the king and queen in chess?

The easiest way to tell the king and queen apart is by comparing their height. The king should be around 1 cm or 0.4″ taller than the queen.

Moreover, in most chess sets the top part of the king and queen are different. On top of the king you can find a cross, while the queen wears a crown.

Below you can see what all the chess pieces are called and how they look.

Which piece is the king in online chess?

And these symbols don’t always look very similar to the physical pieces. And you can no longer compare the heights to see which piece is the king and queen.

In online chess, you can normally recognize the chess king by the crown with a cross on top.

Depending on which digital chess set you are using, the king can look a little different. So below are four examples of how the chess king looks like to give you a good impression.

The symbol for the chess queen also looks a crown. But the queen’s crown looks more pointy and has no cross on top.

Below you can see what the queen looks like in online chess.

Where does the king start in chess?

The kings always start on the e-file. So when setting up the chess board, you should place the white king on e1 and the black king on e8.

Since the king and queen are placed next to each other, you might sometimes get confused where each piece goes.

How does the king move in chess?

The king is the tallest piece in a chess set. So you can easily identify the king by comparing the height of the different pieces. Moreover, in most chess sets a king has a cross on top of its crown.

When playing online chess, you can also recognize the chess piece by the cross on top and the queen by the pointy crown.

Is the king or queen taller in chess?

According to the FIDE chess rules, the king should always be the tallest piece on the board. So you can recognize which piece is the king and queen by comparing their heights.

What is the highest piece in chess?

The king is the highest piece on the chessboard and should be around 9.5 cm or 3.7 inches tall. The queen is the second-tallest piece with a height around 8.5 cm or 3.3 inches. FIDE allows the pieces to deviate by 10% from these standard heights.

Is the king on the right or left?