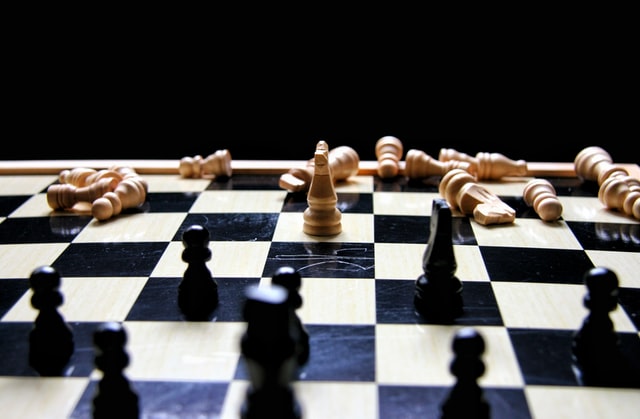 There are several ways that a game of chess can end. A stalemate is one of them that doesn’t occur super often, but is important to know.

A stalemate can help the losing player secure a draw, or may result in the winning player losing any advantage.

Knowing what a stalemate is will help you decide whether you should avoid it or try to force it.

A stalemate happens when there are no legal moves left to make on your turn and your king is not in check. When a stalemate occurs, the game is a draw and both players receive half a point.

In the position below, it’s white’s turn but there are no legal moves left for the king, because you can’t move your king into a check. But the white king is also not in check right now. The game ends in a stalemate.

If it were black’s turn in the position above, you could move your queen one square to the side to give the white king some moving space to avoid stalemate and prepare for a checkmate instead.

Sometimes stalemate is defined as a position in which the king can’t make any legal moves. This is a simplification of the rule that is not always correct! It only applies if the king is the only piece you have left

If your king can’t make any legal moves, but you still have other chess pieces on the board that can move, the game is not a stalemate and will continue.

In the position below, the white king has no legal moves to make, but it’s not a stalemate because you can still move the pawn.

Also read my article on the different types of draws in chess.

There are several similarities between a stalemate and a checkmate. In both cases, the king can’t make any legal moves.

The big difference between stalemate and checkmate is that the king is not in check in a stalemate. In a checkmate, the king is in check and can’t move.

Additionally, it’s not a stalemate if you still have other pieces that you can move. But a checkmate is a checkmate, regardless if you can move pieces besides the king.

The first position shown below is not a stalemate, because white can still move the h pawn. However, the second position is a checkmate, despite the h pawn.

For a more detailed explanation and plenty of example, you can read my article on checkmate in chess.

Now that you know what a stalemate is, let’s let’s look at some different examples to give you a good idea of when stalemates can happen.

Stalemate with king and queen

Stalemates with a king and queen are quite common in games by beginners that haven’t learned how to checkmate with a queen yet.

Since the queen can control so many squares, she sometimes can take away all the movement square of the opponent’s king on accident.

So always be careful when you are using your queen to checkmate.

All three positions below are stalemate if it’s white’s turn, because the king doesn’t have any square to move to.

Stalemate with king and rook

Checkmating with a king and rook is easy if you know the right technique. But if you don’t, you can accidentally end up in a stalemate position.

These stalemates can happen when the king is in one of the corners and the opponent’s king and rook are cutting off the escape squares of the king.

All three positions below are stalemate if it’s white’s turn, because the king doesn’t have any square to move to.

Stalemates can also happen with lots of pawns still left on the board, as long as those pawns are blocked and can’t move. If one of the pawns can still move, it’s not a stalemate.

All three positions below are stalemates if it’s white’s turn, because the king doesn’t have any square to move to and the pawns are blocked.

Stalemate with pieces left on the board

Sometimes a stalemate occurs even though there are still several pieces left on the board for both players.

Normally this happens because it’s illegal to move a piece if it exposes your king to a check.

All three positions below are stalemate if it’s white’s turn, because the king doesn’t have any square to move to and the remaining pieces aren’t allowed to move.

Stalemate in the center

It’s not very common to see a stalemate in the center of the board, because the king normally has a lot of squares it can move to. However, if a lot of pieces are still left, it’s not impossible either.

All three positions below are stalemates if it’s white’s turn, because there are no legal moves left to make.

How to prevent stalemate in chess?

If you know the stalemate rules and know the basic checkmating techniques, it’s easy to prevent a stalemate from happening.

The most important thing to keep an eye on is how many square the opponent’s king can still move to. Prevent making any moves that will take away the last movement squares of your opponent’s king.

If you are a beginner, it might be a little tricky to checkmate someone without causing a stalemate. So it’s important to know the basic checkmating patterns.

Also keep your eyes open for any tactical combinations. In certain positions your opponent can force a draw. Of course, you want to prevent that from happening if possible.

To practice, you can set up an endgame position (such as king vs king and queen) on the board and play against yourself several times to see if you can checkmate successfully without creating a stalemate.

How to force a stalemate?

There is no guaranteed way to force a stalemate. However, sometimes you can force your opponent to make a draw by using basic chess tactics.

Always keep your eyes open for mistakes by your opponent. If you get lucky, you might just be able to save the game.

Let’s look at this position below as an example. White has a king and rook, while black has a king and queen. The queen is a much stronger piece than the rook. So in most cases, the player with the queen would win eventually.

However, in this particular position white can play the rook to a3. If black captures the rook with the king, the resulting position is a stalemate. However, if the black king moves away, the white rook can capture the black queen. So black is pretty much forced to make a stalemate.

Below is another position in which white can force a stalemate. White only has a pawn, while black has a knight and bishop.

However, in this particular position, white can play his pawn to h7 and threaten to promote to a queen on the next move. A queen is much stronger than a knight and bishop together. So black can’t let the pawn promote and has to capture it with his bishop.

However, as soon as the bishop captures the pawn on h7 the position is a stalemate, because the white king can’t move.

Now that you know everything about stalemate and the differences between stalemate and checkmate, let’s go over a few questions people often ask me.

Are stalemates a draw or a win?

A stalemate is considered a draw in chess. It doesn’t matter how many extra pieces you have left on the board.

A stalemate is a bad outcome if you have more pieces on the board than your opponent, because a stalemate is a draw and not a win. If you had played more carefully, you probably could have won instead.

However, if you are losing the game, a stalemate is a good outcome and will still give you half the points.

How common are stalemates in chess?

Stalemates normally happen because beginner’s don’t know how to checkmate correctly. Among experienced chess players, stalemates rarely happen unless the losing player can force a stalemate tactically or if the winning player blunders in time trouble.

Is stalemate a stupid rule?

Many new players voice their frustration with stalemate and call it a stupid rule. After all, if you are crushing your opponent and can drive him into a position where he isn’t able to make any moves, why isn’t that considered a win?

However, many experienced players really like the current stalemate rules. It adds another layer of complexity to the game and ensures that the losing player can still try to play for a draw, no matter how dire the position.

Regardless, in the current game of chess stalemate is considered a draw and there are no indications that this rule will change in the near future.