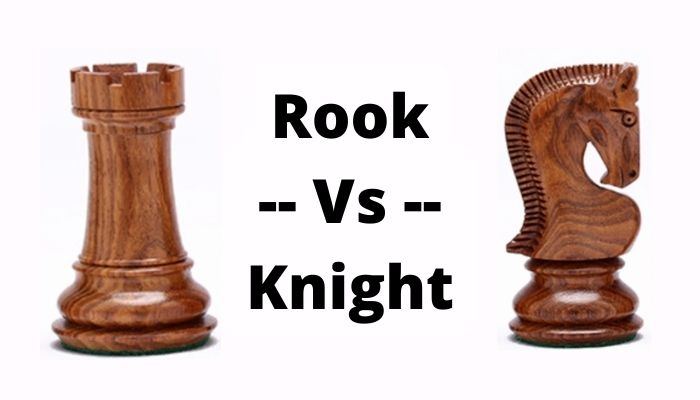 The rook is worth 5 points, while the knight is only worth 3 points.

This is because the rook and knight move completely differently. But why is the linear movement of the rook so much better than the hopping of the knight?

Let’s go over all the reasons why a rook is more valuable than a knight.

Compared to a rook, the movement of a knight is very limited. While a rook can move as many squares as it wants horizontally or vertically, a knight can only move in a fixed L-shape.

This means that a rook can move from one square to any other square on the board within just one or two moves. While the knight takes at least 4 turns to move across the board.

So while a rook can play on two sides of the board simultaneously, a knight can only play on one side due to its slow movement.

Additionally, the knight’s movement can also be very clumsy. For example, you’ll need three turns just to move the knight one square to the left.

This means you’ll need a lot of planning and foresight to determine where you want to move your knights, because it can take many moves to correct a mistake.

Since a rook moves linearly and the chessboard is a square, the rook always controls 14 squares on an empty board.

So the rook will be just as strong in the center of the board as in the corner.

The knight is bar far the strongest when placed in the center of the board, where it can attack 8 squares in total. That’s a lot less than the rook or a bishop, but not terrible either.

However, when a knight is place on the side of the board or in a corner, it only controls 4 or 2 squares respectively. Which is absolutely terrible.

So knights are only strong in the center of the board, while rooks are strong no matter where they are.

As mentioned above, a knight is the strongest when placed in the center of the board.

Unfortunately, the knight is normally also the most vulnerable when place in the center, where it can be chases away by your opponent’s pieces and pawns.

To make sure that your knight is on a good square and can’t be chased a way easily, you’ll have to prepare outposts for them.

In the position below, the white knight on d5 is on a beautiful outpost in the center from which it can’t be attack by pawns anymore.

However, setting up these outposts can take a lot of effort. Rooks don’t need outposts because they control the same number of squares regardless if they are in the center or the side of the board.

4. Can checkmate together with the king

So if you end up in an endgame of knight and king against a king, the game will still finish in a draw despite you having an extra piece!

The only time a knight can checkmate is in a smothered mate, in which your opponent’s king can’t move because it’s surrounded by friendly pieces.

Even two knights with a king can’t force a checkmate, while a pair of rooks can easily checkmate without the help of a king.

5. Can castle with the king

Although it’s a move that most beginners overlook, a king and rook can castle. This both brings the king to safety and activates the rook.

Castling is so important, that you probably want to make use of it in at least 95% of your games.

There is no special move that you can do with the king and knight together.

6. A pair of rooks work together better

Using a pair of rooks to their fullest potential is very easy. You simply put them both on the same rank or file from where the rooks defend each other and attack the same target.

A pair of knights can attack the same target or defend each other, but they can’t do both simultaneously. Moreover, a pair of knights is very difficult to coordinate and more often than not they are in each other’s way.

7. A rook can cut off the king

Being able to cut off the king is a very important motif in the endgame. In the endgame, your king becomes an important piece in the attack, and by cutting off your opponent’s king you are basically playing with one piece extra.

8. A rook can support a passed pawn

The rook and pawn both move linearly. So by placing a rook behind or in front of your pawn, you can support a passed pawn all the way down the board.

However, a knight can either defend a pawn on its current location or protect the square the pawn wants to move to, but not both of those at the same time.

9. A rook can capture a pawn trying to promote

On the flip side, a rook can also prevent an opponent’s passed pawn from promoting by simply moving in front or behind it.

A rook can attack a pawn and the only movement square for the pawn. So a rook can easily capture pawns that are trying to move down the board and promote into a queen.

But a single knight can’t capture a pawn by itself. If the knight attacks a pawn, the pawn simply moves forward one square to safety. But if you prevent the pawn from moving by attacking the square in front of it, you won’t be able to capture it.

The rook is much stronger simply because the knight’s movement is very limited. The knight can only move in an L-shape, so it’s a relatively slow and clumsy piece.

It also means that a knight can only control 8 square at most, while a rook always controls 14 squares no matter where it’s placed.

However, knights are allowed to jump over other pieces, which is a huge advantage over rooks.

So you’ll often see that knights are more useful in the opening and early middlegame. While the rooks become increasingly more powerful as pieces are removed from the board.

That’s why it’s important to always look at the relative piece value based on the concrete position on the board, instead of only looking at the numerical values.