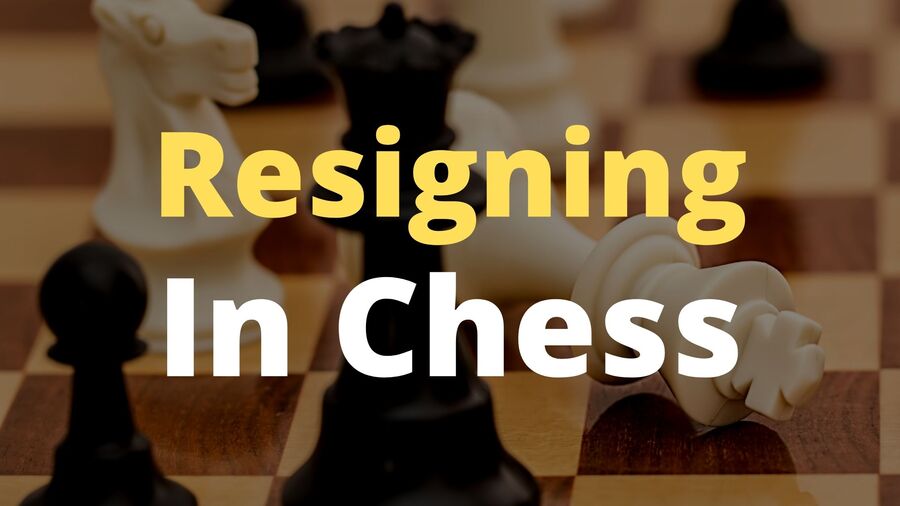 No matter how hard you try, you can’t win every chess game you play.

And you can normally see a defeat coming from miles away if you have a terrible position on the board.

In that case, you can either keep on playing until your opponent checkmates you. Or you can simply resign the game.

In this article, you’ll learn everything you need to know about resigning in chess.

What does resigning mean in chess?

When you realize that your opponent has such a big advantage that you’ll lose the game no matter what, you can resign the game.

By resigning before you are checkmated, you acknowledge that your opponent is strong enough to convert the game into a victory without making any major mistake.

Why do chess players resign?

A chess player can have several reasons to resign a game instead of continuing the game.

First of all, among strong players only a small advantage such as an extra pawn can be enough to convert the game into a victory. However, doing so might require 10 to 20 additional moves.

If you don’t want to play a game in which you have little chance of winning or drawing, you can resign the game early. Most chess players are playing for fun after all.

Secondly, you can also resign to save yourself time and effort. This can be particularly important if you are in a tournament and have to play several games on the same day.

Rather than giving it your all on a game you are going to lose anyway, it might be better to resign quickly and take a longer break before your next game starts.

Finally, some players might also resign early as a sign of respect. If your opponent has a high rating and hasn’t made a single mistake yet during the entire game, by resigning you are basically saying that you believe your opponent will be able to defeat you, and you don’t need your opponent to prove it by playing the rest of the game.

When should you resign in chess?

In general, you should only resign a chess game if there is no chance left to win or draw the game. If your opponent has a big advantage and you have no counter play, it’s time to resign.

However, in practice the right time to resign often depends on your rating and at which level you are playing.

Lower rated players might not even realize that their position is lost and simply play till the very end.

Moreover, new players are normally encouraged to play till the end. Since weaker players often blunder pieces or might not know how to convert an advantage into a win. So you can continue playing in the hope of a big mistake.

You can often hear coaches and teachers say “no one has ever won a game by resigning” to their new students.

However, the better you become at the game, the less likely it is for your opponents to blunder away a big advantage.

And continuing to play even though both players realize that a position is completely lost/won can sometimes be seen as a sign of disrespect.

Similarly, you won’t make any new friends if you refuse to resign a lost position because your opponent is in time trouble.

That being said, there is NO rule that says you have to resign when you have a bad position. So you are free to play on if you want.

When should you NOT resign?

Now that you know when you should resign, it’s also worth mentioning in which cases you should NOT resign a chess game.

If you have a small disadvantage, it’s best to keep playing. Any chess player below the grandmaster level constantly makes small inaccuracies. You can often neutralize small disadvantages by playing just a few good moves.

So don’t resign because you are down a pawn or made a small positional mistake. Even if the chess engine would say your position is objectively worse.

Secondly, even if you have no chance of winning the game, you might still be able to draw the game with a tenacious defense. Perhaps you can trick your opponent into a stalemate, or you can trade down into a king vs king and bishop endgame.

Although playing for a draw isn’t very exciting, you often learn the most from these challenging games.

Moreover, if your opponent is in big time trouble, you can try to draw or win on time. As I mentioned before, you won’t be making any friends by doing this.

But time management is an important part of the game as well. So you have the right to continue playing. Especially, if you are playing an important game for a tournament or your team, winning is more important than making friends.

If you are playing against a weak player, you should play until the end. New players will often blunder a piece and turn a winning game into a losing game.

Some new players might also not know the endgame fundaments very well. If your opponent doesn’t know how to checkmate you with a king and rook, you might still draw the game using the 40 move rule.

Another factor to consider before resigning is whether you are playing by yourself or in a team.

If your game is decisive, your team members might not appreciate it very much if you resign early without giving it your all.

When NOT to resign

Ok, so you are looking at your position on the board and you realize it’s time to resign.

But how do you resign? And what is the correct etiquette of resigning in chess?

Although there are no strict rule on how to resign, normally it goes as follows:

When placing all the pieces back on their original squares, the king of the winner is normally placed in the middle of the board. This way, other players and the arbiter will know who won and who lost.

You can resign at any point in the game, but most players will resign after their opponent makes a move.

However, keep in mind that if you want to resign, you’ll have to do it before the game finishes.

This might sound a little obvious, but it can be important in time trouble. If you don’t want to win a lost position on time, you have to resign before your opponent runs out of time.

Similarly, if a beginner checkmated their opponent without realizing, he/she already won and technically can’t resign later during the game.

Why do grandmasters always resign so early?

You can often see grandmasters resign and draw very early. This is because grandmasters have an extremely deep understanding of the game.

A grandmaster might realize early on that a position that seems full of life to a regular player is actually a complete loss.

Moreover, grandmasters can think 10-15 moves ahead in normal positions, or even calculate up to 20 moves deep in forced variations.

So a grandmaster might realize he will lose a piece in 9 moves, while the position looks unclear to the average chess player.

Finally, grandmasters are extremely good at converting small advantages into victories. And once they have a slight edge, they won’t make any mistakes to let their opponent back into the game.

So grandmasters might resign a slightly worse position because they know their opponent is able to squeeze a victory out of it in 30+ moves.

Is resigning in chess the same as losing?

Do you lose less points if you resign?

No, you will lose the same number of rating points if you lose or resign a chess game. Your new rating will be determined by the final result (win, loss, draw) and the difference in rating between you and your opponent.

Is it better to resign or allow checkmate?

The final result of the game is the same regardless if you resign or allow checkmate. If the checkmate is only a few moves away and can be forced, you might as well let your opponent checkmate you. However, if you have a huge disadvantage but your opponent can’t force a checkmate any time soon, it’s better to resign than play 20+ additional moves.

Is it polite to resign in chess?

Is it rude not to resign in chess?

Strong players might find it disrespectful if you do not resign a clearly lost position. By continuing to play, you are doubting their ability to convert the advantage into a victory. However, although it might be considered rude by some, it is not against any of the rules in chess.

Why do you resign in chess when you lose the queen?

The queen is the strongest and most valuable piece on the board. Once you lose the queen, you have such a big disadvantage that you have next to no chance of winning. Therefore, most people resign directly after losing their queen.

To put things in perspective, a queen is worth 9 points, while a knight or bishop is worth 3 points, and a pawn is worth 1 point.

So if you lose a queen but win a knight and bishop, you are still 3 points behind. You’ll have to win three minor pieces or two minor pieces with 3 points to recover from losing your queen.

Most players are good enough not to blunder so many pieces. So unless you are a complete beginner, it’s best to resign after losing a queen.