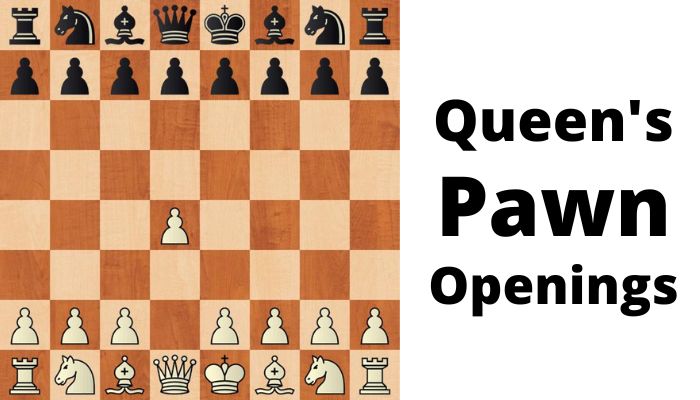 The move d4 is the second most common way to white to start the game. So it’s important to know the basic queen’s pawn opening theory and variations.

Games that start with d4 are normally slightly slower and more positional compared to e4 openings.

Depending on your personal preference, a d4 opening might suit you better than an e4 opening.

In this article, I’ll give you a quick overview the most important Queen’s pawn opening theory and variations.

The queen’s gambit is one of the oldest openings and is to this day still used by many of the strongest players.

After black plays d5, white responds by attacking black’s center with c5. Black can either take the pawn by playing dxc4 or defend the pawn with another piece.

Although it’s called the queen’s gambit, it’s not actually a gambit since white can recapture the pawn in almost all variations. For example, by playing Qa4+ followed by Qxc4, or by playing e4 followed by Bxc4.

The Queen’s gambit occurs after the moves:

The London system is a popular opening choice for many beginners, since white can play the same set of opening moves regardless of black’s response.

After developing the knight to f3 and bishop to f4, white will often play the pawns to c3 and e3 to further support the d4 pawn.

This leads to a very solid position for white. But it doesn’t put much pressure on black’s position and practically gives up on the first move advantage.

The London system occurs after the moves:

The Slav defense is the most popular way to reply to the queen’s gambit. By playing c6 black supports the d5 pawn without blocking in the c8 bishop with e6.

This is the same idea seen in the Caro-Kann defense, but the resulting positions are very different since white played c4 instead of e4.

Although the Slav defense is very solid for black, it also leads to a rather passive position that doesn’t suit everyone’s play style.

The Slav defense has a reputation of being very drawish. This is mainly due to the exchange variation, which leads to symmetrical positions.

Some common variations in the Slav defense are the semi-Slav, the exchange variation, and the modern variation.

The Slav defense occurs after the moves:

The Nimzo-Indian defense is the most commonly played d4 opening. Black quickly plays Bb4 to pin the white knight on c3.

Sooner or later black will play Bxc3, ruining white’s pawn structure and leading to a knight vs bishop imbalance. As a result, black will try to keep position closed, while white will try to open up the game.

The Nimzo-Indian defense occurs after the moves:

The Bogo-Indian is very similar to the Nimzo-Indian. But in this opening, white has played Nf3 before Nc3. So the black bishop can check the white king after Bb4.

If white plays Nc3, the opening transposes into a Nimzo-Indian defense. On Nbd2, black can transpose into a favorable version of the queen’s gambit by playing d5.

White can also play Bd2, exchange a pair of bishops and stay away from most of the opening theory.

The Bogo-Indian defense occurs after the moves:

The Queen’s Indian defense is a modern opening related to the Bogo-Indian defense and one of the most played fianchetto openings for black.

Instead of playing Bb4+, black decides to play b6 with the idea to fianchetto the bishop to b7.

By doing so, black temporarily gives up control of the center and lets white create a large center with a space advantage.

Black has plenty of chances to break down white’s center later on.

The Queen’s Indian defense starts with the moves:

The king’s Indian is a modern opening that really became popular in the mid 20th century.

Black completely ignores the center for the first few moves and only develops the king side pieces. White gets to place d4, c4, and in most variations e4 as well.

Black will normally try to attack white’s center later on by playing d6 followed by e5.

The king’s Indian defense leads to very imbalanced positions where both sides get to play for a win.

Since most modern openings go against basic opening fundamentals, they aren’t very beginner-friendly.

Common variations in the King’s Indian include the Samisch, Averbakh, Petrosian, and four pawns attack.

The King’s Indian defense occurs after the moves:

The Grünfeld defense is similar to the King’s Indian defense, but black strikes back in the center earlier by playing d5.

This means both players will be fighting in the center of the board, instead of the flanks like in a King’s Indian.

Black’s play is a lot more naturally, which makes the Grünfeld defense easier to pick up.

The Grünfeld defense occurs after the moves:

The Dutch defense is a pretty uncommon opening in which black can choose from a lot of different pawn structures.

In the Dutch defense, black start the game by playing f5 to prevent white from playing e4 and controlling the entire center.

This is a similar idea to the Sicilian defense. However, playing f5 opens up the e8-h5 diagonal and leaves the black king vulnerable. And even after castling kingside, the absence of the f7 pawn can leave the black king in a vulnerable position.

Positions arising from the Dutch defense are very asymmetric, which leads to many decisive games. But if white is well-prepared, black will have to struggle to equalize after the opening.

The Dutch defense occurs on the board after the moves:

The Trompowsky attack is a relatively new opening that has gained a lot of popularity in the recent few decades. The Trompowsky is a great way to avoid most of the d4 opening theory.

Black can try to prevent the doubling of the pawns by playing Ne5 or e6, or black can allow the pawns to be doubled. Both options are completely playable, but lead to different types of positions.

The Trompowsky attack occurs on the board after the moves:

The Benko gambit has become incredibly popular over the past few decades. What makes the Benko gambit so special, is that it’s black who is giving away the pawn and not white.

Black is offering the b pawn to undermine the black center and gain a long-term positional advantage.

The Benko gambit doesn’t lead to sharp play with many tactics to calculate, but instead results in a slow positional grind.

White can accept the gambit right away with cxb5, delay taking the pawn by playing e4, Nf3, or f3 first, or white can decline the gambit completely.

The Benko gambit occurs on the board after the moves:

Since d4 is the second most common opening move for white, it’s important to know how to respond to it.

Black can fight for the center right away by playing d5, or play more cautiosly and prepare this move with either Nf6, c6 or e6.

A more advanturous player might even try out the Benko gambit, which is one of the few gambits that survived the harsh scrutiny of the chess engines.

Of course, there are other options as well. But the d4 openings discussed in this article are the most commonly played and theoretically sound.

So if you are trying to build an opening repertoire, I would go with one or two of the openings mentioned above

For a complete opening repertoire, you should also prepare one of the many e4 openings. You can find my favorite e4 openings by clicking here.

Or if you prefer to play aggressive chess, you can try out one of the gambits for white or countergambits for black.