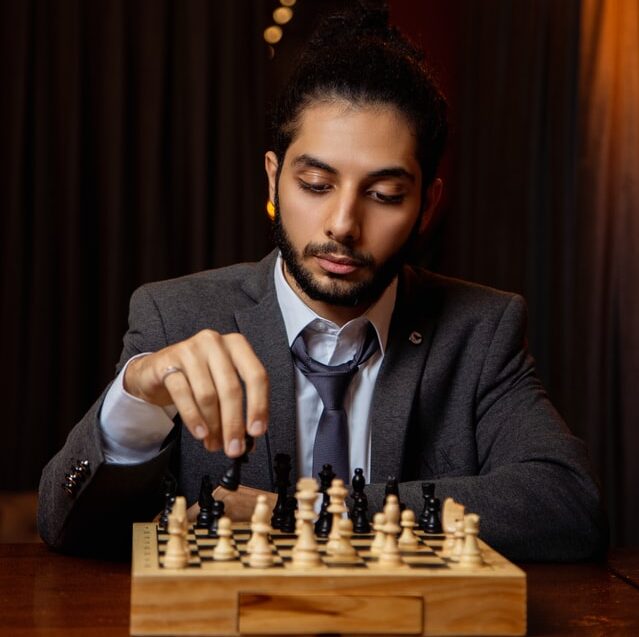 Chess is originally a two player game. One player moves the white pieces, and the other player the black pieces.

But I do sometimes get asked if it is possible to play chess by yourself.

The answer is yes. And if you are trying to improve your chess, you probably should play against yourself on a regular basis.

How to play chess by yourself?

To play a game of chess against yourself, you’ll have to move both the white pieces and the black pieces on the board.

To make the most out of it, you want to consider it as a serious match. So carefully consider each move you make for both sides, and try to calculate everything in your head rather than moving the pieces on the board.

It’s very important that you remain unbiased during the game and make the objectively best moves for both sides. And if you do make a silly blunder by overlooking something, allow yourself to take back a move.

Coming up with good plans for both sides can be difficult. Physically standing up and moving to the other side of the board to make a move can help a lot.

I have often played games in which I thought I had a great position. Only to realize I was actually worse, once I look at the same position from my opponent’s side of the board.

Moreover, since you are playing yourself, there is no need to finish a game right away. You can come back to your game after a few hours or even a day and see if you can come up with new ideas and moves in the position.

When playing by yourself, you can play a full chess game from move 1 to checkmate. Another way to play against yourself is to go over one of your own games and see if you can come up with alternative moves that might have been better. Or you could find a specific position or endgame that you want to study.

Why play chess by yourself?

There are several benefits to playing chess by yourself.

First of all, you learn most from your in-person games with classical time control. Playing rapid and blitz games online is fun, but most games are won or lost by stupid blunders or time pressure.

So to improve, you want to play lots of games with longer time controls. But finding players willing to commit to longer games of chess can be challenging, both offline and online.

Most chess clubs only meet once a week. So if you want to play lots of games and improve quickly, you might have to play some chess games by yourself.

Another benefit of playing against yourself is that you get to decide which openings and types of positions you get to play. If you notice that you often lose certain position, you can play those on purpose to improve.

Or if you are trying to learn a new opening, playing against yourself is a good way to test if you can remember the correct moves. You don’t want to play your new opening in a serious tournament game and realize you forget some crucial lines.

Moreover, since you have to play both the white and the black pieces, you’ll get to discover the basic plans and strategies for both sides in a certain position.

If you only play a certain opening with the white pieces, you can easily get too focused on your own plans and ideas. By playing yourself, you are forced to find the right strategies and counterplay from both sides.

Another way to improve your chess is to find a serious game played by grandmasters and see if you can guess the moves starting from the middlegame.

This is a good way to compare your thinking with some of the best players ever. Don’t only try to guess the right move, but when you are wrong also try to understand why your move wasn’t played.

Considering all these benefits, it’s not very surprising that many club players and experienced grandmasters frequently play chess games against themselves.

Is it hard to play chess against yourself?

Yes, it’s difficult to play chess against yourself because you’ll have to stay unbiased and make good plans for both sides.

Since you are playing yourself, your “opponent” will always know what you are thinking and planning. Which means clever tactics to win material won’t work, and giving a checkmate is very difficult. Not surprisingly, most chess games you play against yourself will end in a draw.

However, this will also force you to make the objectively best move in the position, because your opponent isn’t going to fall for your tricks and traps.

Many beginners rely on one-move-threats to win the game. But these threats are rarely the best move in the position, and may even worsen your position if your opponent defends against them correctly. So playing against yourself may help to unlearn this play style.

The final difficulty you may experience when playing yourself, is not realizing you made a mistake. You might overlook a simple win from both sides of the board.

To overcome this problem, you should let a chess engine or more advanced player take a look at your game after it finished. They will often point out some simple mistakes or points to consider next time you play.

Is it fun to play chess by yourself?

Although playing chess by yourself has a lot of benefits, most people consider playing against other players a lot more fun.

Some of the most fun parts of chess such as outsmarting your opponent, checkmating someone, or tricking your opponent with some clever tactics aren’t possible when playing yourself.

Playing against yourself is hard work and for most people it is simply not their cup of tea.

However, fun is of course completely subjective. Some people might enjoy playing against themselves.

It is a lot less stressful when you are playing without any pressure to win. And you can use as much time as you want without an impatient opponent staring at you from the other side of the board.