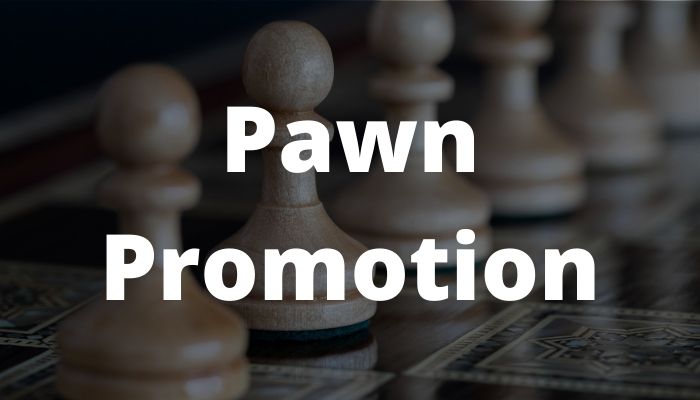 Pawns are the only piece in chess that can’t move or capture backwards.

So if you keep pushing one of your pawns, it’s eventually going to reach the opposite side of the board.

But don’t worry. Your pawn isn’t going to drop off of the chess board if you keep moving it forward.

When a pawn reaches the other side, it can promote into another piece of your choice.

This is called “pawn promotion”.

So let’s take a look at how pawn promotion works and why it’s so important in chess.

When a pawn reaches the other side of the board, it can promote to a stronger piece. This means that you can replace the pawn with a knight, bishop, rook, or queen.

Unfortunately, promoting a pawn to a second king is not allowed.

Normally you want to promote the pawn to a queen, because the queen is the strongest piece on the board.

Once your pawn promotes into a queen, it’s much easier to checkmate your opponent than with a king and pawn.

Keep in mind that you have to promote your pawn. You can’t let your pawn stay a pawn when it reaches the last rank.

Can you promote a pawn to a second queen?

Yes, when your pawn reaches the opposite side of the board and you didn’t lose your original queen yet, you have the option to promote your pawn to a second queen.

But not every chess set comes with an extra queen. If you want to promote to a second queen and you don’t have a second queen of the same color available, you can simply use a prop until one of your queens get captured.

In the position shown below, white managed to promote the a pawn, resulting in two white queens on the board.

Theoretically, you could have a total of 9 queens on the board, if all your pawns reach the other side and you didn’t lose your starting queen.

Of course, that almost never happens in a real game of chess. Your opponent would have to actively help you for that to happen.

As I mentioned before, in most cases you want to promote your pawn to a queen, since the queen is the strongest piece in chess.

But you can also promote your pawn to a knight, bishop, or rook.

Promoting a pawn to one of these three pieces is referred to as “underpromotion”.

Underpromotion doesn’t happen very often, but in some positions underpromotion is even better than promoting to a queen.

What is the point of underpromotion?

There are two cases in which you want to make use of underpromotion.

The first case is when promoting to a queen would result in a stalemate.

In the position below, white could promote the f pawn by pushing it to f8.

But by promoting to a queen, you can suddenly see that black no longer has any legal moves. The pawn is blocked and the king isn’t allowed to move into a check.

The resulting position is a stalemate. So white ends up drawing the game despite a large advantage.

If you promote the pawn into a rook instead of a queen, the black king can still move to g7 and the game continues.

Since this endgame is still easy to win with a rook extra, underpromotion is much better than promoting to a queen in this position.

The second scenario in which you want to make use of underpromotion is when you need a knight right away to check(mate) the opponent’s king from the promotion square.

In the position below, both the white and black kings are in danger.

You can promote the f7 pawn by playing it to f8. But if you promote your pawn to a queen, black can checkmate you first by playing Qb2. And your extra queen won’t help at all.

But if you promote to a knight in this position, you can checkmate the black king first!

Note that the knight can attack the black king from f8 while a queen on f8 can’t.

Can a promoted pawn be taken immediately?

Yes, a promoted pawn can be taken immediately by your opponent. Promoting a pawn counts as a move, so after you promote your pawn it’s your opponent’s turn again.

Make sure that the promotion square is safe or defended. Else you risk losing your new queen right away.

When a pawn reaches the other side of the board, it can promote into a knight, bishop, rook, or queen. But you can’t promote your pawn into a king.

In most cases, you want to promote your pawn into a queen. If you already have a queen on the board, you can still promote to a second queen.

However, in some special positions, it can be better to promote to a rook, knight, or bishop. This is called underpromotion.

After pawn promotion, it is your opponent’s turn to move. So make sure your promoted piece is safe and defended, or else your opponent can capture it right away.

Can a pawn promote to a king?

No, you are not allowed to promote a pawn into a king. So you can only have a single king on the board at all times.

Can a pawn promote to a (second) queen?

Yes, you can always promote your pawn into a queen, even if you already have a queen on the board. In that case, you can continue playing with two queens.

Can a pawn be promoted to a pawn?

No, once your pawn reaches the other side of the board, you have to promote it into either a queen, rook, bishop, or knight. You can’t let your pawn remain a pawn on the 8th rank.

Whose turn is it after pawn promotion?

Moving a pawn to its promotion square and promoting it to another piece is considered a turn. So if you promote a pawn, it’s your opponent’s turn. You can’t promote a pawn, and move the new piece on the same turn.

Why would you promote a pawn to anything but a queen?

You can promote a pawn to a rook if promoting it to a queen would result in a stalemate, or you can promote to a knight if that would check(mate) the opponent’s king from the promotion square.