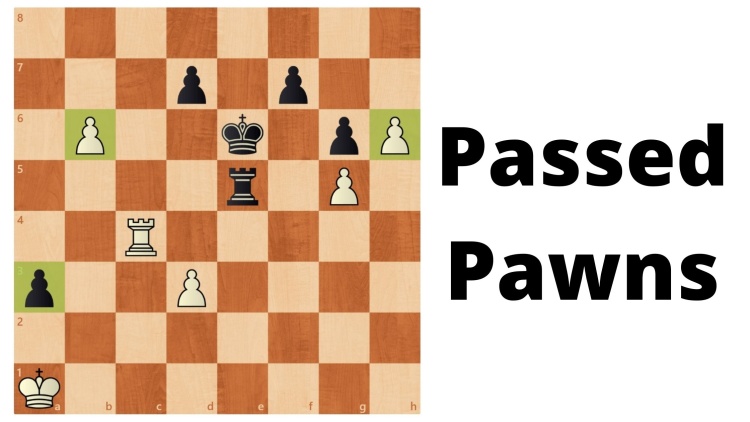 The famous chess player Philidor used to say that the “pawns are the soul of the game“. Which is a saying that still rings true to this day.

There are many pawn related concepts and ideas that you need to know to become better at chess.

One of them most important themes is the passed pawn.

Passed pawns can have a big strategical impact during the middlegame, and often become the most important piece on the board in the endgame.

So let’s take a closer look at what these passed pawns are and how to use them to your advantage!

What is a passed pawn?

A passed pawn is a pawn that can no longer be stopped by your opponent’s pawns from reaching the opposite side of the board. In other words, a passed pawn no longer has an enemy pawn in front of it and has passed the enemy pawns on adjacent files.

In the diagram below, you can see an example of a passed pawn.

(Remember that pawn only capture diagonally forwards and not sideways).

All the other white and black pawns in the above diagram are not passed pawns. Although the black pawn on e5 has no opposing pawn on the e file, it can still be captured by the white pawn on f3 if it were to move forward to e4.

However, not every passed pawn is the same. There are three different types of passed pawns that you should know.

In the diagram below, the white d5 pawn is a protected passed pawn because it is defended by another white pawn on e4.

Normally, you don’t want to trade a valuable piece for a pawn. So your opponent will have to dedicate an entire piece to blockading the pawn and preventing it from moving down the board.

Now let’s look at two common misconceptions when it comes to passed pawns.

In the position below, the white d5 pawn is not considered to be a “protected passed pawn” because it’s protected by a bishop on e4 rather than a pawn.

In the second diagram below, the white d5 is not yet a protected passed pawn. White will have to move the e3 pawn to e4 first to protect the passed pawn.

However, if it’s black’s turn to move, your opponent could play his own e5 pawn to e4 and prevent you from making a protected passed pawn.

As a result, an isolated passed pawn can be either an advantage or a disadvantage.

In the diagram below, both the white pawn on a4 and the black pawn on e5 are isolated passed pawns. They can’t be stopped by opposing pawns, but also can’t be supported by friendly pawns.

In the diagram below, the white a4 pawn is an isolated passed pawn because it is two files separated from all the other pawns on the board.

Similar to isolated passed pawns, having an outside passed pawn can also be an advantage or a disadvantage.

In the position shown above, the white a4 pawn is a strong outside passed pawn. Black’s king will have to move closer to stop and/or capture it. But since the outside passed pawn is so far away, it will take black many turns to move it’s king over.

In the meantime, the white king will be able to infiltrate and capture several of black’s own pawns. By the time the black king is back, all of its own pawns will already be captures by the white king.

Black will soon capture the a4 pawn and be a pawn ahead for the rest of the game.

This shows that outside passed pawns can quickly turn into weaknesses if you aren’t careful.

“En passant” is french for “in passing“, so you might expect that taking en passant has something to do with passed pawns.

However, this is not true. Taking en passant and passed pawns are unrelated concepts, so you don’t have to take en passant to create a passed pawn.

For more information, you can read my article on how pawns move and how to capture en passant.

Why are passed pawns so strong?

The biggest reason why passed pawns are so strong is because they threaten to promote to a queen when they reach the opposite side of the board.

When that happens, the weakest pieces on the board will suddenly become the strongest piece. Your opponent will have to prevent this at all cost.

As a result, your opponent will have to dedicate one of its pieces to preventing the passed pawn from promoting. That piece will effectively be on guard duty and out of the action until the passed pawn is captured.

In the position below you can see an example of this. Black has to move his king over to stop the a5 pawn from promoting. But this gives the white king the opportunity to capture the three black pawns.

So even if you don’t manage to promote your passed pawn, it will often distract your opponent enough for you to get a big advantage somewhere else on the board.

I mentioned before that connected passed pawns are the strongest. And the position below shows exactly why.

White has two passed pawns on a5 and b4 and black has a king on b5. This combination of these three pieces is a very common pattern in endgames that you should definitely remember.

The black king can never capture the pawn on b4, because as soon as the black king does so, the white a5 pawn can start moving to a8 and black’s king won’t be able to catch up and stop it.

This means that the white king is basically free to do whatever it wants. The white king can slowly capture each of the black pawns, while the black king can’t help to defend them.

So make sure to remember that this specific combination of these three pieces is much better for the side with the pawn.

How many points is a passed pawn?

It’s difficult to determine how many points a passed pawn is worth without looking at a concrete position.

In the starting position a pawn is worth 1 point. But it’s worth 9 points if it can reach the opposite side of the board and promote into a queen.

So the value of a passed pawn is clearly between 1 and 9. The closer the pawn is to promotion, the more valuable it becomes.

A passed pawn on the 6th or 7th rank is often worth 3 to 5 points. Because your opponent will probably have to use a bishop (3 points), knight (3 points), or rook (5 points) to stop the passed pawn.

How do you use passed pawns?

There are roughly two ways to use a passed pawn: promote the pawn or use it to deflect an important piece of your opponent.

So whenever you have a passed pawn, you first want to check if it can safely move to the other side of the board.

In the position below, white can promote the passed a5 pawn in three moves. However, black needs four moves with the king to stop the pawn.

So white can simply march the passed pawn down the board and promote to a queen.

Even if the passed pawn can be stopped, the enemy will still need to dedicate a piece to stop and/or capture the pawn.

And while that piece is distracted, you have several turns to gain an advantage somewhere else on the board.

In the position below, the black king is close enough to white’s outside passed f5 pawn to prevent it from promoting.

However, while the black king is busy capturing the dangerous f pawn, white’s king can capture both of black’s pawns on a6 and b5.

How to create a passed pawn?

It’s not easy to create a passed pawn. Most chess players will prevent their opponent from creating a passed pawn, because they know how dangerous they are.

Fortunately, in some cases, your opponent can’t stop you from making a passed pawn.

The easiest way to create a passed pawn is to advance a pawn majority.

A pawn majority means that you have more pawns on one side of the board than your opponent. For example, 3 white pawns versus 2 black pawns.

By pushing those pawns forward, you can trade off pawn for pawn until you are left with a passed pawn.

In the example shown below, white has a pawn majority on the queenside (2vs1) and starts to push his c pawn forward.

After trading one pair of pawns, white is left with a passed pawn.

Note that the order in which you push the pawns can be extremely important. As a general rule of thumb, you want to start pushing the pawn that is not opposed by an opponent’s pawn.

However, pawn endgames can be extremely tricky that deserves its own article.

How do you deal with a passed pawn?

The best way to deal with a passed pawn is to prevent your opponent from making one. The second-best way is to capture the passed pawn as soon as possible.

Unfortunately, you’ll probably end up in plenty of positions in which you can’t do either.

In that case, there is only one thing left to do…

By blocking the passed pawn, you can prevent it from becoming a threat to you.

In the example below, you can see that black decided to block white’s passed d pawn by placing the knight right in front of it.

Knights are particularly good at blockading passed pawns because they are the least valuable piece after pawns, and they can jump over enemy pieces.

So the white pawn isn’t blocking the movement of the black knight, and the knight still plays an important role in the game.

On the flip side, the queen is the worst piece at blocking pawns. Since they are so powerful, you want to put them to better use than blocking a measly pawn.

Moreover, a queen can easily be chased away from the blocking square by weaker pieces.

I know this article was quite a long read. There is just so much to say about passed pawns, and this article just scratches the surface!

To make sure you don’t forget anything, here are all the most important points: