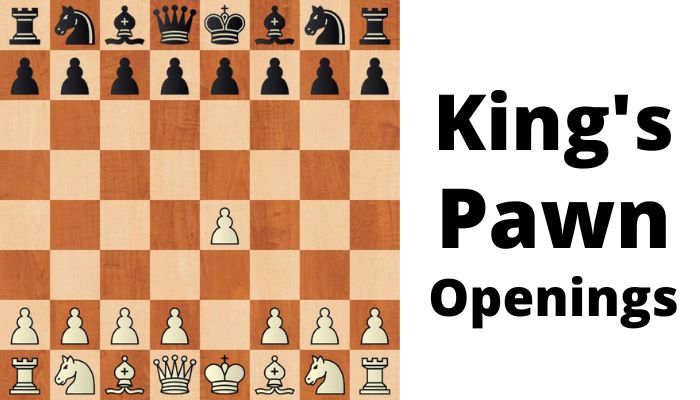 The king’s pawn opening is the most common opening in chess. By playing the pawn to e4, white immediately claims the center.

There are a lot of ways that black can respond to this, which is exactly why e4 openings are so fascinating.

In this article, I’ll give you a quick overview of the most important variations and theory for the king’s pawn opening.

The Sicilian defense is the most popular response to e4. Instead of moving a pawn towards the center, black tries to attack the center from the flank by playing c5.

After disrupting the center, black will try to place one of its own pawn on d5 or e5 later on. While white tries to keep a close grip on the center and use the space advantage.

There are many directions you can take a Sicilian defense, as shown by the many variations such as the open Sicilian, closed Sicilian, Sicilian dragon, Najdorf, etc.

The Sicilian defense occurs after the moves:

The French defense has been a popular response to e4 for many centuries. It normally results in a slower game that requires positional play rather than concrete calculations.

By playing e6, black is planning to strike back in the center with d5 on the next move. However, the e6 pawn also blocks the c8 bishop from developing outside the pawn chain.

Some popular variations of the French defense include the Tarrasch, Winawer, advanced French, and the exchange French.

The French defense occurs after the moves:

The Ruy López, also known as the Spanish opening or Spanish game, is one of the oldest recorded openings in chess history. This opening is played on all levels from beginners to super grandmasters.

White quickly develops the kingside and threatens to take the c6 knight with the bishop, which would leave the e5 pawn undefended.

Common variations in the Ruy López include the Berlin defense, closed Ruy López, exchange Ruy López, and the Marschall attack.

The Ruy López occurs after the moves:

The Italian game is another of those old chess openings that has been around for centuries. Since the first few moves are very natural, anyone from beginner level to grandmaster level plays this opening.

In the Italian game, white’s light squared bishop is developed to the c4 square instead of the b5 square, like in the Ruy López.

From c4 the bishop keeps controls the central d5 square and even eyes the f7 pawn next to the black king.

The most common variations in the Italian game are the Giuoco Piano, Giuoco Pianissimo and Evans gambit.

The Italian game occurs after the moves:

The Scotch game is a good alternative to the Ruy López and Italian game if you don’t want to spend too much time on learning opening theory.

Although the Scotch game was a popular opening in the early 20th century, it isn’t played as often as some other openings on this list nowadays. Which means it’s unlikely that your opponent knows a lot of the old theory.

By playing d4 on the third move, white quickly attacks black’s d5 center pawn. This will guarantee white a space advantage but also releases the tension in the center immediately.

The most commonly played variations in the Scotch game include the Schmidt variation, Scotch gambit, Goring gambit, and Malaniuk variation.

The Scotch game occurs after the moves:

The Caro-Kann is known for its solidity and is the fourth most common reply to e4. This opening has been in the repertoire of many great chess players.

By starting out with c6, black is preparing to play d5 on the next move. This is the same idea as the French defense, but by playing c6 instead of e6 you don’t block in your light squared bishop on c8.

Some common variations in the Caro-Kann defense are the Karpov variation, advance variation, Panov-Botvinnik attack, and the exchange variation.

The Caro-Kann occurs after the moves:

The Pirc is a modern chess opening in which black initially gives up on the center, and tries to attack it later on from one of the flanks. This opening become popular in the late 20th century and is still frequently play to this day.

Black plays neither d5 or e5 and instead opts to fianchetto the bishop by playing g6 and Bg7.

This opening might be difficult for beginners to pick up since it goes against many of the standard opening principles. And black can easily lose the game if they never manage to break white’s center.

The Pirc opening occurs after the moves:

The Alekhine’s defense is another modern opening that is a lot less played than the Pirc. This opening was popularized by Alexander Alekhine in the 1920s, but fell out of favor relatively quickly.

Black plays Nf6 on the first move to attack the e4 pawn. Which white normally replies to by playing e5, grabbing even more space and attacking the black knight.

Although black loses several tempi in the Alekhine’s defense, a quick look at the chess database reveals that black actually scores surprisingly well in this opening.

Some common variations in the Alekhine’s defense are the exchange variation, modern variation, and the four pawns attack.

The Alekhine’s defense occurs after the moves:

The Scandinavian defense was very popular in the early 20th century, but is not played as frequently any more nowadays.

Black tries to attack white’s center on the first move by playing d5 as a response to e4. White almost always captures this pawn by playing exd5.

Black can then capture the white pawn back directly with the queen or play Nf6 first and try to capture it on the next move.

This gives black a piece in the center, which sounds nice at first. But the queen or knight on d5 can be attacked by Nc3 or c4, which gives white an important extra tempo in the opening.

The Scandinavian defense occurs after the moves:

The Vienna game is a theoretically sound opening that unfortunately doesn’t get played very often.

White chooses to develop the b1 knight before the g1 knight, which bypasses a lot of modern opening theory.

Since Nc3 doesn’t attack black’s center immediately, it’s a less confrontational approach to the game. Moreover, by delaying the move Nf3, white keeps the option open to develop the queen along the d1 – h5 diagonal or to push the f pawn forward to f3 or f4.

The Vienna game occurs after the moves:

Since e4 is the most common opening move for white, it’s important to know how to respond to it.

Of course, there are other options as well. But the e4 openings discussed in this article are the most commonly played and theoretically sound.

So if you are trying to build an opening repertoire, I would go with one or two of the openings mentioned above.

For a complete opening repertoire, you should also prepare one of the many d4 openings. You can find my favorite d4 openings by clicking here.

Or if you prefer to play aggressive chess, you can try out one of the gambits for white or gambits for black.