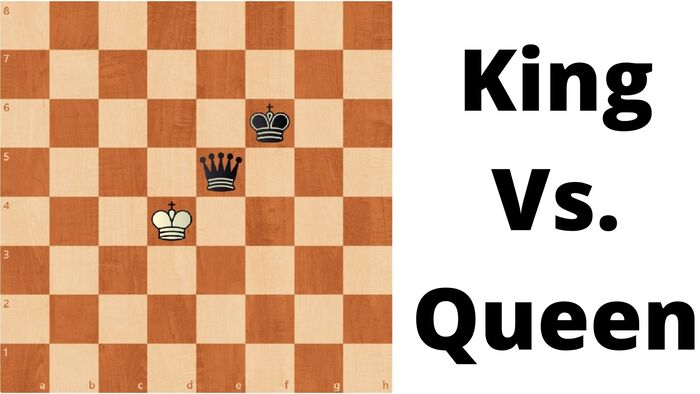 The king is your most valuable piece. And if you get checkmated, it’s game over.

Since the queen is the strongest piece on the board, you normally want to keep your king as far away from your opponent’s queen as possible.

Unfortunately, you can’t always keep your king safely behind its own pawns, and your king does meet the opponent’s queen face to face.

In that case, it’s important to know if your king can take the queen or not. The short answer is as follows:

Yes, a king can take a queen in chess if the opponent’s queen is moved directly next to the king and is left undefended. However, the king can never approach or capture a queen on its own, since it can’t move close enough to an opponent’s queen.

Keep reading if the above statement sounded a little confusing and you want some more detailed explanation!

To make sense of everything, we first need to go over how the king moves in chess again.

I wrote a detailed article on it before with plenty of examples and covering all the exceptions.

But it basically comes down to this:

A king in chess can move 1 square in any direction, including horizontally, vertically, and diagonally.

Below you can see what that looks like on the chessboard:

An important caveat to the above movement rules is that you are not allowed to move your king into a check.

Of course, you wouldn’t want to do this anyway because then your opponent could capture your king and end the game!

But it’s important to realize that it’s not only unwise to move your king into a check, it’s actually considered an illegal move.

So in the position shown below, the white king only has two squares to move to. You can’t move your king to e5, e4, or e3 because you would move your own king into a check by the black rook.

How the queen moves

Now let’s take a look at how the queen moves and captures pieces.

The queen can move horizontally, vertically, and diagonally for as many squares as she wants, as long as the squares are unoccupied.

When the king and queen meet

So what happens when a king and queen meet on the chessboard?

The first important thing to notice is that the queen always keeps an eye out on the 8 squares directly surrounding it. In the diagram below, I illustrated this by highlighting these squares in red.

So you probably realized already that as long as the black queen stays on the same square, the white king can never approach and capture it no matter how many moves you make.

Can a king capture a queen in chess?

For example, check out the three positions shown below.

The next three positions are different.

Fortunately, the other pieces are much easier to capture for the king.

Checkmated by the queen

Sometimes you get into a position where your king is attacked by the opponent’s queen but you can’t make any legal moves or capture the queen with your king, as shown in the diagram below.

This means your king is in checkmate. When you are checkmated, you lose and the game finishes.

You can learn more in my article on checkmates in chess.

The king is allowed to capture the opponent’s queen. However, the king can never approach and take the queen on its own because it would have to move into a check to do so.

However, if the queen voluntarily moves to a square adjacent to the king, you can capture it as long as the queen isn’t defended.

If the opponent’s queen gives a check, you have to move the king to safety. If this is no longer possible, your king is in checkmate and you lose the game.