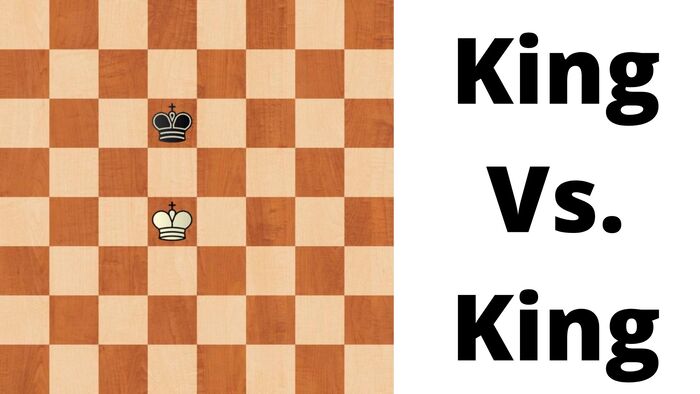 The chessboard is like a battlefield; pieces from both sides are constantly capturing each other until there are almost no pieces left on the board.

One question I often get from beginners in endgames is whether it’s possible for a king to kill another king. The answer is simple:

No, a king can’t kill a king in chess. You are not allowed to move your own king into a check, so it’s impossible for your king to move close enough to your opponent’s king to capture it.

Some people might just take no for an answer. But keep reading if you want to understand why you can’t take a king with another king!

To make sense of everything, we first need to go over how the king moves in chess again.

I wrote a detailed article on it before with plenty of examples and covering all the exceptions.

But it basically comes down to this:

A king in chess can move 1 square in any direction, including horizontally, vertically, and diagonally.

Below you can see what that looks like on the chessboard:

An important caveat to the above movement rules is that you are not allowed to move your king into a check.

Of course, you wouldn’t want to do this anyway because then the opponent could capture your king and end the game!

But it’s important to realize that it’s not only unwise to move your king into a check, it’s actually considered an illegal move.

So in the position shown below, the white king only has two squares to move to. You can’t move your king to e5, e4, or e3 because you would move your own king into a check by the black rook.

What happens when two kings meet?

When two kings meet face to face on a chessboard, you get a situation that’s referred to as opposition.

In these positions, neither king can move forwards because that would place them in a check by the opponent’s king.

The diagram below shows what happens when two kings meet on the board. The kings can only move sideways or backwards, but they can’t directly approach each other.

So both the kings are basically staring each other down. Whoever moves the king first allows the opponent’s king to move forwards and gain ground.

Can a king capture a king in chess?

By now you hopefully understand that you can never capture or kill your opponent’s king with your own king.

However, knowing that you can’t kill a king with your own king leads to one obvious question:

Can a king check another king in chess?

This is another question I get a lot, which is pretty much the same as the previous one. But for the sake of completeness, I’ll answer it anyway.

Which pieces do I need to kill the king?

You need at least two pieces to checkmate your opponent’s king. However, not every piece combination is enough to force a checkmate.

You’ll need at least one of the following combinations of chess pieces to checkmate:

You can also checkmate the opponent’s king with a king and pawn, assuming you can promote the pawn into a queen or rook.

Note that a single knight or bishop is not enough. And even two knights and a king is not enough to checkmate.

What if only kings are left in chess?

Sometimes the two kings are the only two pieces left on the board. So is the game ever supposed to finish if you can’t capture or checkmate a king with another king?!

Whenever there are only two kings left in chess, the game automatically ends in a draw. There are different types of draws, and having insufficient material to checkmate is one of them.

When you draw a chess game, both players receive half a point and there is no winner or loser.

A king can’t check or capture another king because you would have to move your own king into a check first. If there are only two kings left on the board, the game ends in a draw.

So although the king is strong enough to capture a queen, it can’t capture another king.

For more information, you might also want to read my article on how the king captures in chess.