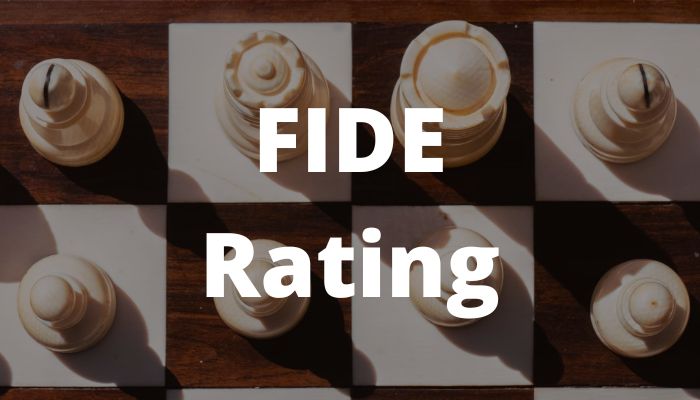 FIDE is the international chess organization that is in charge of organizing all the important international tournaments and keeping track of the FIDE ratings.

If you have been playing chess at a local club, you probably already have a national chess rating.

However, since the rating system varies from country to country, the FIDE ratings are normally used to compare how good players from different countries are.

Let’s take a look at how to get a FIDE rating yourself!

Getting a FIDE rating

You probably won’t earn a FIDE rating by just playing at your local club. There are a few rules you need to follow to get a FIDE rating. You can find these in the official FIDE handbook.

I have summarized the 4 most important steps to follow here:

If you have played in several tournaments but still don’t have a FIDE rating, it’s probably because these tournaments weren’t recognized by FIDE.

For the tournament to be recognized by FIDE, the organizer needs to register the event beforehand and submit the results afterwards.

Since the organizer needs to pay a fee for this, many small events choose not to do so.

Moreover, for an event to be recognized by FIDE, it needs to have a certain minimum number of FIDE rated players participating.

You can take a look at the FIDE calendar if you are having a hard time finding FIDE tournaments.

Depending on the area you live, it can be difficult to find any tournaments nearby.

It’s not uncommon for serious chess players to travel internationally to participate in major chess events.

How long does it take to get my FIDE rating?

The ratings of super grandmasters are updated as soon as their game finishes. Unfortunately, regular players like you and me have to wait a little longer.

FIDE updates their ratings once a month. So you never have to wait more than 30 days if you fulfilled all the requirements for a rating. But depending on the date that the tournament finishes and the organizer sent the results to FIDE, you might get your rating earlier.

As soon as you receive your new FIDE rating, you can find it on the FIDE website here.

What will my FIDE rating be?

There is nothing you can do to receive your FIDE rating faster. But since the FIDE rating formula is public, you can calculate what your new rating will be yourself before it’s official.

And don’t worry, you won’t be needing any of that high-school calculus.

You can simply use the rating calculated on the FIDE website here.

To calculate your new FIDE rating, you need to know the average rating of your opponent’s, how many points you scored, and how many games you played.

Note that the way FIDE calculates ratings is very different from how the USCF rating system works. So don’t use a USCF rating calculator to determine your FIDE rating.

Do you need to pay for a FIDE rating?

You don’t need to pay for the FIDE rating itself. But to get a FIDE rating, you’ll have to play in FIDE tournaments. These tournaments normally charge a participation fee.

Additionally, you might have to pay for travel expenses and accommodation if there is no FIDE event in your area.

If you become strong enough, you can apply for one of the FIDE chess titles. There are currently four titles available: candidate master, FIDE master, international master, and grandmaster.

To get a FIDE title, you need to have a rating that is at least above 2000. And to become a chess grandmaster, you need a FIDE rating above 2300 and have played in two tournaments with a performance rating above 2600.

You can imagine how difficult it would be to achieve such a high rating. Currently, there are roughly 1700 chess grandmasters globally.

You might have also heard the title “super grandmaster” being used by some to denote players with a rating above 2700.

However, this is not an official FIDE title. You can read my article on super grandmasters in chess for more information.

To make professional chess more accessible for women, FIDE has introduced additional chess titles that only women can qualify for. These titles are easier to obtain, because the rating requirements are lower.

You can find all the rules and regulations about FIDE title in the official handbook.

Can you lose a chess title?

The candidate master, FIDE master, international master, and grandmaster titles are for life. So even if your FIDE rating drops below the requirements, you won’t lose your FIDE title.

The only chess title that you can lose is world champion. The world champion has to defend this title once every three years against a challenger to maintain it.

How to get FIDE rating online

Which means that your online rating won’t be accepted when you want to play in an over-the-board FIDE event.

The FIDE online arena titles are also different from the standard FIDE titles. And as far as I know, most people don’t take the online FIDE ratings very serious.

So if you want to become a real grandmaster, you’ll still need to play in person.