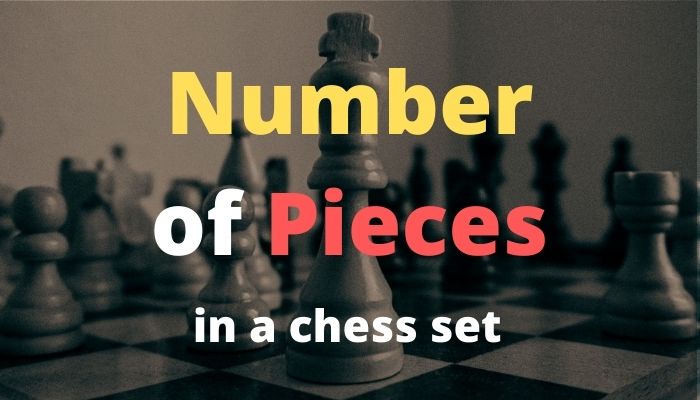 You can find lots of different pieces on a chess board, each with their own unique appearance, name, movement pattern, and value.

There should be at least 32 pieces in a chess set. But some chess sets can come with extra pieces as well.

Of course, you need all 32 pieces to play a game of chess. So let’s take a closer look at the pieces on the chess board.

How many pieces are on a chess board at the beginning?

At the beginning of a new game, there should be 32 pieces on the chess board. Half of them are white, and the other half should be black.

Each piece starts the game on a specific square. So you need to know how to set up the chess board before you can start playing.

Below you can see what the starting position on a physical board and on a digital board look like.

Note that the “black” pieces don’t necessarily need to be black. They can be any dark color, such as brown or dark gray.

As the game goes on, the number of pieces will slowly decrease as pieces get captured. However, the game can finish with a checkmate while there are still plenty of pieces left on the board.

Chess sets with an extra queen

These extra queens can be used when you promote a pawn without losing your original queen. In that case, you can have two queens on the board.

When you are starting a new chess game, these extra queens can be placed next to the board so that they are readily available when you need them.

Especially during in-person blitz, rapid, or bullet games this extra set of queens is useful, because you don’t want to waste precious time looking for a second queen from another board.

How many chess pieces per player?

Each player starts the game with 16 pieces on their side of the board. These pieces occupy the first two rows for each player. The pawns occupy the second row and the remaining pieces are placed on the first row.

If your chess set came with an extra queen, you can place this extra queen besides the board.

It’s possible for a player to lose a piece during the game if it gets captured by their opponent, but it’s not possible to gain more pieces.

However, when a pawn reaches the last row of the board and promotes, you can replace the pawn with another piece.

Note that there are some chess variants in which it’s possible to gain extra pieces by using captured pieces as your own, such as bughouse. But these rules don’t apply to standard chess.

How many different types of chess pieces are there?

Although each player starts the game with 16 pieces, not all of these pieces are unique. You can find 6 unique types of chess pieces on the board: the king, queen, rooks, bishops, knights, and pawns.

I wrote a special article on how to identify all the chess pieces and how valuable each chess piece is.

But I’ll give you the quick summary below.

How many pawns are there in chess?

Each player starts the game with 8 pawns, so a standard chess set should contain 16 pawns.

The pawn is the weakest piece on the chess board. However, several pawns working together can be a powerful force that is difficult to stop.

How many rooks are there in chess?

Each player starts the game with 2 rooks, so a standard chess set should contain 4 rooks.

The rook is a long range piece that can be very strong in endgames. Both players start the game with two rooks, one in each corner of the board.

How many knights are there in chess?

Each player starts the game with 2 knights, so a standard chess set should contain 4 knights.

The knight in chess looks like a horse. I’m not sure where the actual knight himself went. Perhaps he fell off his steed?

How many bishops are there in chess?

Each player starts the game with 2 bishops, so a standard chess set should contain 4 bishops.

You can recognize a bishop by its top half which represents a miter, the traditional headdress worn by bishops.

Moreover, in most chess sets the bishop has an indentation on top, but there can be some exceptions.

How many queens are there in chess?

Each player starts the game with one queen, so a standard chess set should contain 2 queens. However, some chess sets come with an extra pair of queens.

How many kings are there in chess?

Each player starts the game with one king, so a standard chess set should contain 2 kings.