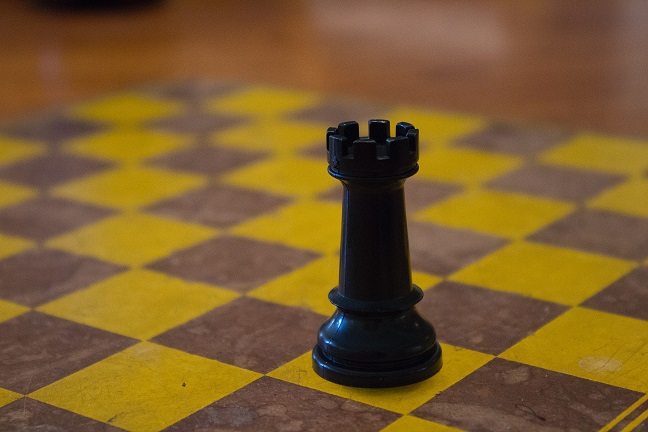 The rook is one of the easiest pieces to use in chess. Its horizontal and vertical movements are easy to understand and use to their full potential.

Did you know that there is also a special move to switch the rook and king? This is a move you can only play once per game, but you probably want to play it in most of your games. So it’s important to know how it works!

Let’s start by looking at the basic movements of the rook first and go over the more advances rules at the end of the article.

The rook can move both horizontally and vertically across the chess board. This means that on an empty chessboard, the rook can reach any square within just two moves.

In the diagram below, you can see all the squares that the rook can reach in just a single move.

Unlike the bishop and the knight, a rook can cover the same number of squares no matter where it is placed on the chessboard. So a rook can still be an active piece even when it is placed close to the edge of the board.

How many spaces can a rook move in chess?

A rook can move as many spaces as it wants horizontally or vertically. However, since the chess board is 8×8 in size, the largest number of spaces that a rook can move at once is 7.

In the diagram below, the rook on a1 can move 7 squares to go to either a8 or h1. However, moving less spaces than the maximum is allowed as well. So the rook could go to a2 or e1 as well.

However, if a rook comes across one of its own pieces it will be blocked. You can’t move your rooks over other pieces. So in the diagram below, the rook can only move to a2, because it’s blocked by the knight on b1 and pawn on a3.

And if your rook meets one your opponent’s pieces you have the option to capture them!

How does a rook capture in chess?

A rook can capture opposing pieces by moving to a square that is already occupied by your opponent. You can only capture one piece per turn, and you are not allowed to capture your own pieces in chess. Moreover, capture is not mandatory in chess.

After capturing the bishop, the resulting position will look like this:

Can a rook move backwards in chess?

Yes, rooks can move both forwards and backwards in chess. So you don’t need to be afraid of moving your rook too far forward. Within a single move, your rook can move back to the safety of your side of the board.

Moving your rook backwards is often a good idea when it’s attacked or if you want to reroute your rook to a better square, as shown in the diagram below.

Can a rook move sideways in chess?

Yes, rooks can move sideways, forwards, and backwards in chess. In other words, a rook can move horizontally and vertically.

Can a rook move diagonally?

A pawn is also allowed to capture diagonally forward. However, in the absence of any enemy pieces, pawns can only move forwards.

Can a rook move over other pieces?

The rook is not allowed to jump over other pieces, regardless if these are your own pieces or your opponent’s pieces.

However, there is a special move in chess called “castling” in which you can switch your king and rook.

When castling, the king moves two squares towards the rook, and the rook “jumps over” to the other side of the king.

You can learn everything about this special move in my articles about how to castle in chess and how to move the king in chess.

For now, just remember that outside of castling, the rook is not able to move or jump over other pieces.

The only piece that can freely move over pieces is the knight. If you want to know more, you can read our article on how the knight moves.

But despite this small shortcoming, a rook is still much stronger than a knight.

When can I move my rooks?

Below you can see the starting position of all the pieces, including the rooks:

So you can’t move your rooks on your first move…

Probably you won’t be able to move your rooks for quite a few moves in the opening, because you first need to move your other pieces away to create some space for your rooks to maneuver.

So at the beginning of a chess game, your rook feel pretty useless. However, after developing some pieces, trading other pieces, and opening a few files your rooks will become very powerful.

Castling is a good move in most positions, because it lets you quickly move your king away from the center. On the flanks, the king is normally safer because it can hide behind pawns. Whereas, the center pawns are normally moved forwards to develop your pieces quickly.

If you want to castle, you have to move your king two squares towards the rook and move the rook to the opposite side of the king.

The two diagrams below will show you what kingside castling looks like before and after:

Similarly, this is what castling queenside looks like before and after:

In some positions, you even have the choice to castle either long or short. In those cases, you’ll have to choose one, because you can’t castle both long and short in the same game.

Moreover, there are a few rules you need to remember to determine if you are actually allowed to castle. These are as follows:

If one or several of these 4 rules aren’t met, you aren’t allowed to castle.

For a more detailed explanation, you can read my articles on castling in chess and king moves.

Can a rook move over the king?

During the rest of the game, your rooks aren’t allowed to move over any pieces or move over the king a second time.