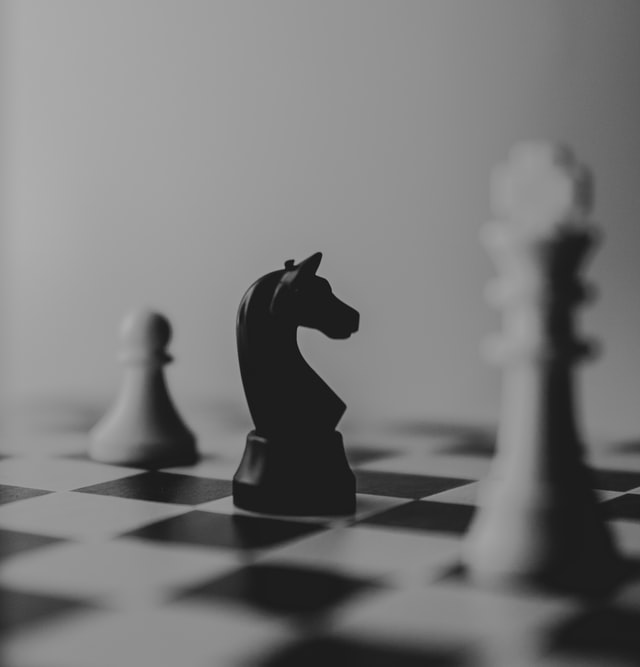 Among all the different pieces on the chess board, the knights are the most difficult to master. Unlike all other pieces, they don’t move in straight lines, but rather in an L shape.

This strange movement can be tricky to get used to. So in this article I’ll help you understand how the knight moves, and I’ll go over all the important rules.

How knights move in chess

As you can from the diagram below, a knight that is placed in the middle of the board has 8 squares it can move to. While a knight in the corner can only move to two squares.

A common phrase you’ll hear in chess is that “a knight on the rim is dim”. And this is exactly why. A knight in the corner or at the edge of the board doesn’t have a lot of squares it can move to.

In general, it’s a good idea to move your knights towards the center, where they can have the maximum influence over the rest of the board.

Can a knight in chess move diagonally?

A knight is never allowed to move diagonally and must always move in the L-shape. However, there are other chess pieces that can move diagonally such as the bishop, queen, and king.

A pawn is also allowed to capture diagonally forward. However, in the absence of any enemy pieces, pawns can only move forwards.

How do knights capture in chess?

Knights capture enemy pieces by replacing them on their square. Which means if you move your knight to a square that already has an opponent’s piece on it, you can capture that piece and place your own knight on that square.

However, keep in mind that capturing is not mandatory in chess. So the white knight can also choose to move to one of the 6 squares that are still empty.

Can knights jump in chess?

Yes, the knight is the only piece in chess that can jump over other pieces. This includes jumping over your own and over the opponent’s pieces.

This makes it so fun to move the knights around!

In the diagram below, I highlighted all the legal moves for the white knight in yellow. As you can see, the white knight can jump over its own pieces and black’s pieces if it wants to move to the d6 or e5 squares.

The ability to jump over other pieces can make knights very tricky to deal with. You can often be surprised by knight moves from your opponent, because they are so easy to overlook.

However, you can use this to your own advantage as well. Don’t be afraid to jump over other pieces and into action!

Can a knight jump over two pieces?

Can a knight move first in chess?

In the starting position, each of your knights has two squares it can move to, as shown in the diagram below.

Moving one of your knights as your first move is not a bad choice at all. And many top chess players like to start with moving their knight to c3 or f3 to keep their options open.

Can a knight in chess move when blocked?

A knight that is completely blocked can’t move. This happens when all the squares the knight can normally move to are already occupied by pieces of its own color.

In chess, you can’t capture your own pieces. And this rule applies to your knights as well. So even though knights have the ability to jump over pieces and capture enemy pieces, they can still be blocked by their own pieces.

The position below shows a knight that is blocked and unable to move.

Normally, a knight on a1 is able to move to b3 or c2. But in this case, both of these squares are already taken by a pawn and king of its own color, respectively. If you want to move the knight, you’ll first have to move either the pawn or the king away to make space for the knight.

This is another reason why knights are bad when placed at the edge of the board; they easily get blocked or trapped.

Can the knight move backwards in chess?

As mentioned before, knights at the edge of the board aren’t very good and are at risk of being blocked in. So you normally don’t want to move your knights backwards unless you really have to. For example, when your knights are attacked by one of the enemy pawns.

However, in some case, it’s a smart move to temporarily move your knights backwards to reroute them to a better square.

In the position shown below, the white knight on g4 has advanced to the 4th rank. But to be honest, it’s not really doing anything from that square. It is staring at its own e5 and f6 pawn, and the black king is preventing it from infiltration through h6.

Now would be a good time to move the knight backwards to e3, with the idea of eventually moving it to c4 followed by d6. From the d6 the white knight will be defended by its own pawn and target the weak f7 pawn in black’s camp.

Of course, black will try to stop you from achieving this goal if he/she realizes your plan. In that case, you might have to reposition the knight to a different square, such as b4 or g5.

For more examples, you can also read my article on chess pieces that can move and capture backwards.

How do you stop knights in chess?

There are no guaranteed ways in chess to stop the enemy’s knight from moving. The enemy’s knight can simply jump over your own pieces, and you can’t block them because they will just capture your pieces.

The best way to stop a knight is by disincentivising it from moving to particular squares. You can do this by already attacking those square with your own pieces.

This idea is shown well in the position below. All the square that the knight can move to are already covered by the bishop. Moving the knight at this moment would be suicidal.

Bishops are great at preventing knights from moving. Especially if knights are placed close to the edge of the board.

However, keep in mind that this also places your bishop on active guard duty. So ideally, you would keep the enemy knights away from crucial squares with your pawns.

What happens when a knight reaches the other side?

A knight remains the same even after it reaches the other side of the board. Pawns are the only pieces that can promote to a better piece upon reaching the 8th rank.