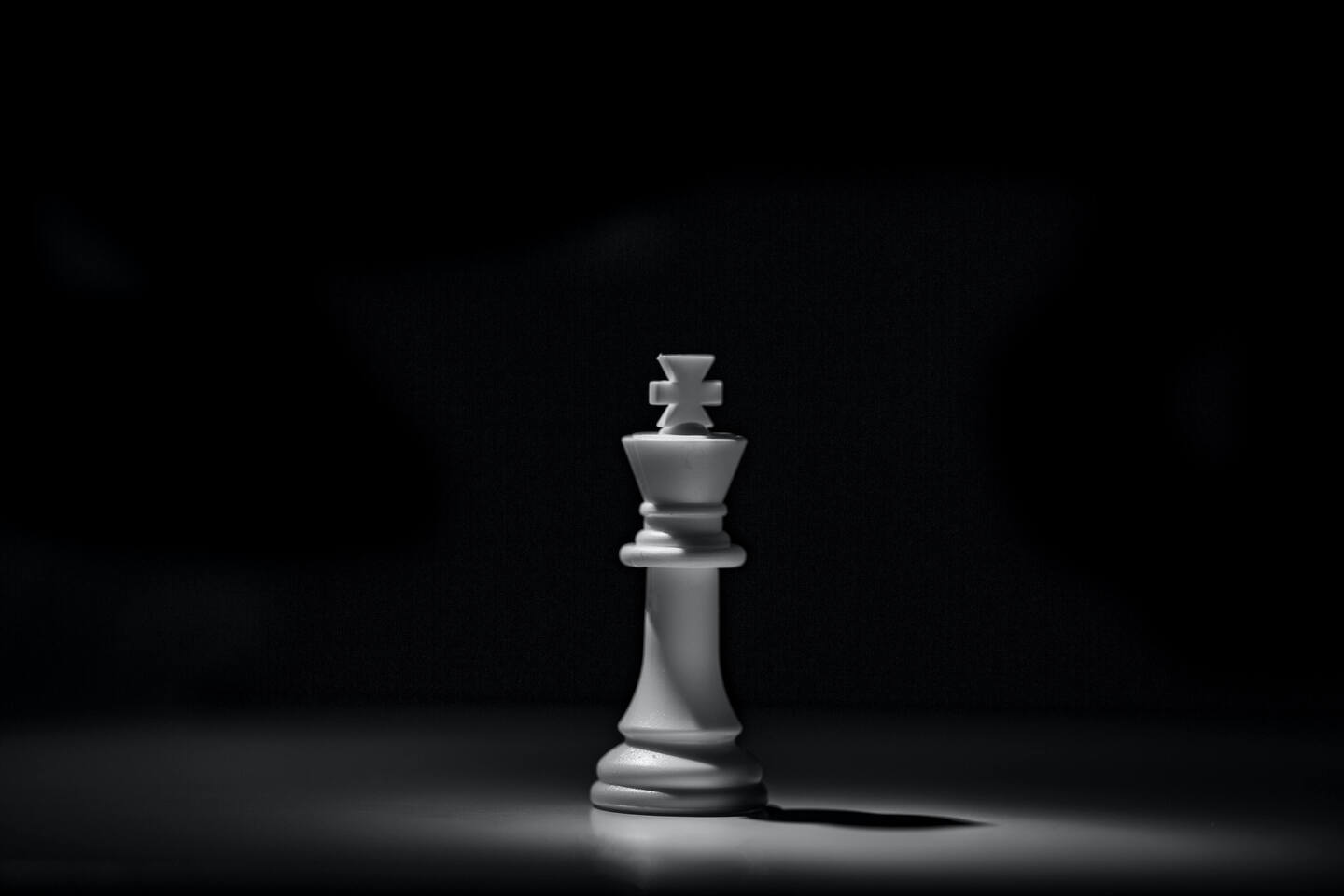 The king is the most important piece on the chessboard. But for most of the game, it’s also one of the weakest pieces on the board, and you constantly have to worry about getting checkmated.

However, if you manage to get into an endgame, the king can suddenly wake up and become the most powerful piece on the board.

Let’s take a closer look at how the chess king moves. I’ve tried to include as many examples as possible, so every rule will be easy to understand.

If you aren’t familiar with rooks, you can read my article on how rooks move in chess.

When can the king move?

You can move your king at any time, as long as he’s not blocked by friendly pieces and he doesn’t move into a check.

Unfortunately, this means that you can’t move your king on your first move. In the starting position, your king is completely surrounded by its own forces, as shown below. You’ll have to move some of your pieces and pawns to make room for your king to move.

Moreover, if all the square surrounding the king are either blocked by friendly pieces or are attacked by the opponent’s pieces, you can’t move your king.

In the position below, the white king is not allowed to move because the c5 square is taken by its own pawn and all the other square are attacked by black’s queen and rook.

Fortunately, white can still move his other pieces like the queen, rook and pawn to safe himself from black’s attack.

Can the king capture in chess?

Yes, when the king moves to a square that is already occupied by an opponent’s piece, the king will capture that piece. So a king can capture pieces that are horizontally, vertically, and diagonally one square away.

In the position below, the white king can capture either the pawn or the knight. However, since capturing is not mandatory in chess, you can also move the king to an empty square.

The only thing to keep in mind is that you can’t capture another king. If you want to know why, read my article on whether a king can take another king in chess or how the king captures in chess.

Can the king capture the piece checking it?

Yes, the king can capture a piece checking it if that pieces is only one square away from the king and the piece is not defended by other pieces.

When can the king not capture?

The king can not capture an opponent’s piece if that piece is defended, because you would put your own king in check by capturing.

Not that this rule applies regardless if the piece you want to capture is giving check or not.

Can a king capture a king?

In the position below, you can see there are only two kings left on the board. If white wanted to capture the black king, he would have to move his own king one square closer to the black king first. However, if he does that, he would be captured himself because it is black’s turn.

Moreover, placing your king in danger is an illegal move, so you wouldn’t be able to place your king directly next to your opponent’s king even if you wanted to.

That’s why the game is immediately considered a draw when there are only two kings left on the board.

In the position below, the black rook is controlling the e file. Moving your king to e5, e4, or e3 would be an illegal move, because you would place your own king in check.

If you play an illegal king move during a friendly game, your opponent will normally let you know and ask you to play something else.

However, if you play illegal moves in a serious tournament, your opponent can claim a victory right away.

What happens if the king can’t move?

If your king can’t move, you are forced to move one of your other pieces. But if you can’t move any of your pieces, you are in a stalemate.

A stalemate occurs when you are currently not in check and you can’t make any legal moves with any of your pieces.

For example, in the diagram it’s white’s move but he doesn’t have any legal moves to play. The pawn can’t move forward because the king blocks it. And his king can’t move to the side because the black rook would check him. As a result, the position is a stalemate.

Note that stalemate is very different from checkmate. In a checkmate you can’t move your king and you are in check.

For a more detailed explanation and plenty of examples, you can read my articles on the stalemate rules or checkmate rules.

How to move the king and rook?

There is a special move that you can make with your king and rook called “castling”. In order to castle, you can move your king two squares towards the rook and the rook jumps over the king.

Below you can see an example of what castling look like:

As you can imagine, castling is a super useful move!

However, castling is actually a little more complicated than shown above. There are a lot of position in which you can’t castle.

For a more detailed explanation, you can read my article on how to castle in chess.

Now that we have gone over all the important king moves, captures, and castling, let’s take a look at some questions you might still have.

How many spaces can the king move in chess?

A king can only move one space at a time in chess, either horizontally, vertically, or diagonally. This makes the king a lot less mobile than other pieces such as the knight, bishop, rook, or queen.

Can a king move backwards?

Yes, a king can move forwards and backwards in chess. The only piece in chess that can’t move backwards is the pawn. Moving your king backwards is often a good idea to escape and attack.

Also read my article on which pieces in chess can move backwards.

Can a king move diagonally in chess?

Yes, the king can move diagonally both forwards and backwards. Moving diagonally counts as one move, not two moves. The king can also capture pieces diagonally if the opponent’s pieces are one square away.

No, the king can not move like a knight. The L-shaped movement pattern is unique to the knight. So a king can’t move 2.5 steps like a knight and also can’t jump over other pieces.

Can the chess king move without check?

Can a king move into check?

No, moving your own king into check is an illegal move. When your opponent notices that you made an illegal move, he/she can immediately claim the victory.

Is it checkmate if the king cannot move?

It is checkmate if your king is in check and cannot move anywhere. However, it’s a stalemate if you cannot move your king or any of your other pieces and you are not in check.

A checkmate is considered a win, while a stalemate is merely a draw no matter how many extra pieces you have on the board.

Also read my article on what is stalemate and what is checkmate.

Can a king move two spaces in chess?

Yes, a king can move two spaces when castling. Castling is a special move made with both the rook and king at the same time. However, in all other cases your king is only allowed to move one square at a time.

If you want to know more about this special move, you can read my article on castling in chess.

Can you make a move that exposes your king?

No, you can not move a piece if that would result in one of your opponent’s pieces giving you a check. If you want to move that piece anyway, you’ll first have to move your king away, place another piece in between, or capture the opponent’s piece.

For example, in the diagram below white is not allowed to move the pawn on c4 forwards, because that would mean the black bishop on a6 would give a check. White also can’t move his knight of e3, because it would expose the king to a check from the black rook on h3.

If you move the white king to d4 on this move, you can move your pawn or knight on your next move.

How many times can a king move?

A king can move one square per turn and you can make as many king moves in a game of chess as you want.

However, if no pieces are captures or pawns are moved for 50 moves the games is considered a draw. This is referred to as the “50 move rule” in chess.

So if there are only two kings left on the board, you don’t have to play until infinity.