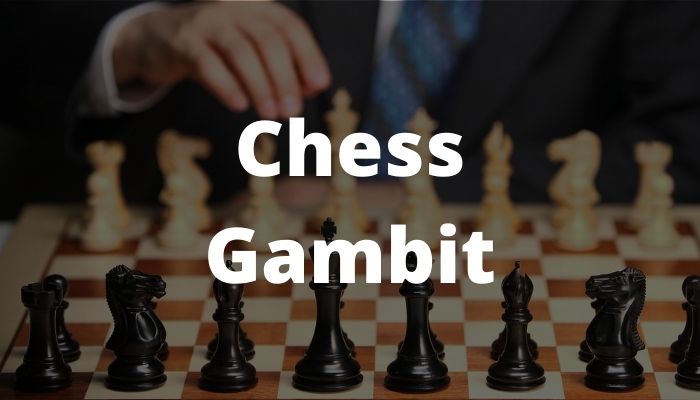 If you studied chess openings before, you might have come across the word “gambit”.

A gambit in chess is an opening in which one of the players sacrifices material to gain a different type of advantage.

Most gambits sacrifice a pawn, but it’s also possible to sacrifice multiple pawns or even a minor piece.

Both the white and black player can start the game with a gambit.

A gambit from the black player is also sometimes referred to as a “countergambit”.

The naming of openings is a little inconsistent when it comes to gambits. Sometimes the word gambit isn’t included in the opening name, such as in the two knights defense.

Other times, an opening is called a gambit, even though it technically isn’t. For example, the queen’s gambit isn’t a true gambit because black can’t hold on to the sacrificed pawn without seriously compromising the position.

What is the point of a gambit?

At the start of a new chess game, the position on the board is completely symmetrical.

And it’s very difficult to win a position that’s completely equal, because neither player is better or worse.

If you are playing for a win, you normally want to introduce an imbalance into the position and try to attack your opponent’s weaknesses.

An opening gambit is one of the fastest ways to create an asymmetric position.

In most opening gambits, one of the players gives up a pawn to gain a positional or strategic advantage.

The idea is that in the long run, the dynamic play that you get for the pawn is enough to win back the pawn with interest.

But keep in mind that playing an endgame with a pawn down often results in a loss. So if you gambit one of your pawns, you have to win it back or checkmate your opponent before the middlegame is over.

How do gambits work in chess?

A sound opening gambit should give you plenty of counterplay for the pawn. This counterplay can come in different forms.

The first type of counterplay is gaining several tempi. One of your opponent’s pieces might be left in a vulnerable position after accepting a gambit, which you can then attack (several times) while developing pieces. This lets you finish development and start an attack several turns before your opponent.

Another form of compensation can be piece activity. Accepting a gambit might leave one of your opponent’s pieces on a bad square, or might make it difficult for your opponent to develop the pieces to their ideal squares. Moreover, sacrificing a pawn might open up an important file or diagonal that you can use for an attack.

A gambit might also give your opponent permanent positional weaknesses. The most common weaknesses are doubled pawns, backward pawns, or isolated pawns. You can use these weaknesses as targets for the rest of the game.

Finally, most gambits will give you attacking chances due to a combination of all three factors mentioned above. Although these attacks rarely lead to a checkmate at the grandmaster level, they can often be crushing at the club level.

If black decides to accept the gambit with 4…Bxb4, play normally continues with 5.c3 Ba5 6.d4.

White ends up with a strong center (pawns on c3, d4, and e4) and opened up important diagonals for the bishop and queen to start attacking the black king.

In the resulting position, black has a strong bishop on a6 that controls the a6-f1 diagonal, is ahead in development, and can use the half open a and b files later on. Moreover, white has difficulty develop the f1 bishop.

As you can see, both the gambits shown above sacrifice a pawn but regain compensation in very different ways.

There is almost a limitedless number of gambit openings to choose.

Although there are a handful of good gambits, there are also a lot of gambits that are not theoretically sound.

This means that careful engine analysis has shown that the gambit player doesn’t get enough compensation to justify the sacrifice of a pawn.

However, the refutation of these gambits can be very complex and require many accurate moves, which might be nearly impossible for an average player to figure out over the board. Especially if you are playing shorter time controls.

So for the average chess player, playing a gambit that might not be theoretically sound can still give good results. Catching an unprepared opponent off guard with an aggressive gambit often results in a quick victory.

A clear downside of most gambits is that your opponent can simply decide not to accept the gambit with not downside. After all, capture is not mandatory in chess.

And if your opponent doesn’t accept the gambit, the position can turn very dry and positional, which is the exact opposite of what you are aiming for with most gambits.

When you are playing a gambit, you should be fine with the position that arises after your opponent accepts or declines the gambit.

What is the best gambit in chess?

As I mentioned before, a gambit opening doesn’t need to be perfectly sound to be playable for the average player.

And whether you should play a gambit depends on many factors such as your personal play style, your opponent’s rating, time control, tournament conditions, etc.

That being said, I believe it’s better to go with a sound gambit, since you will be able to use these during your entire chess journey.

To the best of my knowledge, some of the best gambits in chess include:

If you want to know how to play these gambits, you can read my articles on the best gambits for white and gambit openings for black.

A gambit is a chess opening in which one of the players sacrifices material for compensation.

This compensation can come in different forms, such as a lead in development, piece activity, permanent weaknesses in your opponent’s position, etc.

Although gambits lead to exciting attacking chess, many gambits that were once popular have been refuted by chess engines. This leaves only a handful of chess gambits that are theoretically sound.

However, for an average chess player it’s very difficult to refute a gambit over the board, so many dubious gambits remain popular among amateur players.