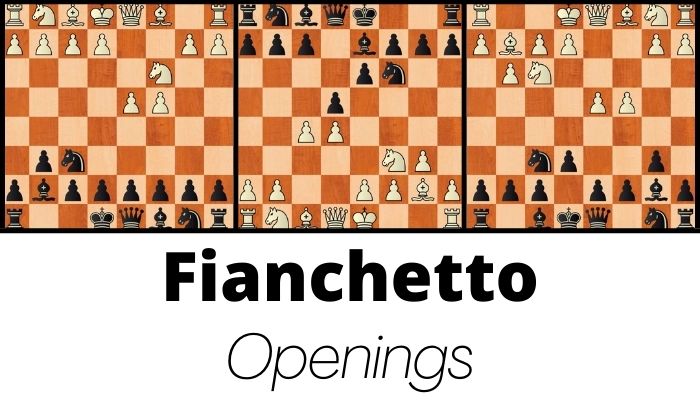 If you are tired of always playing the same Ruy Lopez or Italian opening, you should try out one of the many fianchetto openings.

There are plenty of fianchetto openings to choose from with both the white and black pieces.

By playing your bishop on b2 or g2 as white or b7 or g7 as black, you make sure that your bishop is placed on the longest diagonal on the board and have a large impact on the rest of the game.

Let’s look at some of the best fianchetto openings that you can include in your own repertoire.

The king’s Indian defense is the most basic fianchetto opening for white.

White will play the moves g3, Nf3 and Bg2. This leaves the entire center to black and black can respond with many setups.

As an example, the Yugoslav variation in the King’s Indian attack goes as follows:

The Nimzowitsch-Larsen attack, also shortened to Nimzo-Larsen, is another basic fianchetto opening. But in contrast with the King’s Indian attack, white decides to fianchetto the queenside bishop instead.

This opening also lets black take the center from the very start, and black can grab the central squares with moves such as e5, d5 or c5.

White will later try to attack black’s center by playing c4 and/or d4.

A typical variation of the Nimzowitsch-Larsen attack would look like:

The Catalan is a very popular opening even at the grandmaster level, in which white first grabs some with the moves d4 and c4, followed up by fianchettoing the kingside bishop.

White will try to make the most out of his g2 bishop by opening up the long a8-h1 diagonal.

White start the game with the move c4 in the English opening. From there, both white and black can choose between various setups.

However, one idea you see in many English opening variations is that white will fianchetto the kingside bishop.

One common line in the English opening in which white chooses to fianchetto is:

As you can see, this position is very similar to the Catalan but white has chosen to delay the d4 move. By playing d4, white can transpose into a Catalan opening.

Delaying d4 as long as possible or playing d3 are also viable options for white.

The Bird’s opening appears on the board after white play f4 as the first move.

This is a relatively uncommon opening because playing f4 from the beginning weakens your kingside.

Like many other fianchetto openings, both players get to choose between different pawn structures. But a common line in Bird’s opening is the Dutch variation, in which both players fianchetto.

The King’s Indian defense is a solid option for black if white starts the game with either c4 or d4.

The standard line goes as follows:

Since you don’t want white to block your b7 bishop with e4 and d5, you normally start by playing Nf6 and e6. And only then fianchetto the bishop with b6 and Bg7.

White might try to neutralize your bishop by fianchettoing their own kingside bishop.

Normal opening moves in the Queen’s Indian defense are:

In this fianchetto opening, black allows white to grab a lot of space in the center with the d5 and e4 pawns.

But in return, black gets an open diagonal for the g7 bishop, initiative on the queenside, and a clear target on e4.

The Benoni defense appears on the board after the moves:

The Benko gambit is a wilder version of the Benoni defense, in which you gambit a queenside pawn for active play.

The Benko is one of the strongest gambits you can play with black, so if you like to play fighting chess even with the black pieces, this opening might be the right choice for you.

Black will normally fianchetto the kingside bishop after solidifying the center. A normal line in the Benko would be:

The Grünfeld defense starts similar to the King’s Indian defense, but black makes sure to include the move d5 early on to fight for the center.

Initially, black’s bishop on g7 doesn’t look super strong because its movement is limited by the white d4 and c3 pawns.

After a few move developing moves, black will have to play c5 to further undermine white’s pawns in the center and active the fianchettoed bishop.

The standard Grünfeld defense will appear on the board after the moves:

The Sicilian defense is one of the best openings for black and is a great option if you are playing for a win with the black pieces.

There are many variations in the Sicilian, but if you are looking for a fianchetto opening, the Sicilian dragon is the place to be.

White will try to attack on the kingside, while black can counter on the queenside by using the strong fianchettoed bishop on g7.

The Sicilian dragon normally starts with the moves:

The Pirc defense is one of the modern openings that has really become popular in the late 20th century.

It looks similar to the King’s Indian defense, but since why started with the move e4, black also has to play d6 first to prevent white from pushing the pawn to e5 immediately.

After castling, black can choose for a setup that includes the move e5 or c5 to attack white’s center.

Although not every Pirc defense includes a fianchettoed bishop, the line I would suggest includes the moves:

The Dutch defense is a relatively uncommon opening at all levels. Similar to Bird’s opening for white, starting with the move f5 weakens black’s kingside. So many players shy away from the Dutch opening.

But if you learn the critical opening lines and get familiar with these types of positions, the Dutch defense is playable up to very high ratings.

If you follow up the f5 by fianchettoing the kingside bishop, you are playing the Leningrad variation of the Dutch.

This line can appear on the board after the moves:

White’s best response to the Dutch is to fianchetto their own kingside bishop as well. However, at the beginner and intermediate level, most players will simply develop both bishops towards the center.

How strong is a fianchetto opening?

Whether a fianchetto opening is good or bad really depends on the specific opening.

Fianchetto openings such as Bird’s opening and the Leningrad Dutch are considered to be dubious by most grandmasters.

Other fianchetto openings such as the Pirc and the Benko gambit are solid openings, but are more difficult to pick up for beginners because they go against common opening principles.

However, something that all fianchetto openings have in common is that they provide you with a strong bishop on the long diagonal.

The fianchettoed bishop is also safe behind its own pawns, while a bishop in the center can sometimes become a target of an attack.

And if you castle on the same side as the fianchettoed bishop, your king will be extra safe.

However, the pawn you move to fianchetto your bishop can also become a target. In some fianchetto openings your opponent will start pushing down the a or h pawn to attack the fianchettoed position.

And once you trade off the fianchettoed bishop, you can leave behind a lot of weak squares in your position.

You can learn more in my article on when to fianchetto a bishop.

How to play a fianchetto opening?

Hopefully, you have found a fianchetto opening that you want to try. The first step to learning a new opening is memorizing the moves.

I have already given the first few moves for each opening above.

Regardless of which fianchetto opening you are playing, there are a few ideas you want to keep in mind.

Fianchettoing your bishop often gives you a strong piece on the long diagonal. But not every fianchetto opening (the double fianchetto for example) is equally strong.

So if you play at a high level, you want to carefully decide which fianchetto opening to pick up.

Once you enter the middlegame, you have to make sure that your fianchettoed bishop comes to live by opening up the diagonal. If you fail to do this, your opponent will often get a big advantage.

If none of the fianchetto openings seem really appealing, you can also try a more conventional e4 opening or d4 openings. Or try one of these gambit openings if you are looking to spice things up.