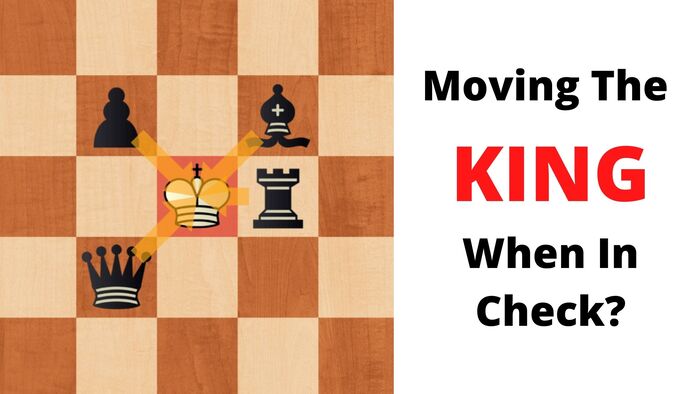 A check is a direct threat to your king. So when your opponent gives a check, you have to do something about it.

In most cases, you can simply move your king to a different square. But that is not the only way to stop a check.

When your king is in check, you can either move your king to safety, capture the piece giving the check to your king, or place another piece in between to block the check.

So you don’t necessarily have to move your king when in check, you have other options available as well.

Let’s look at each of them in more details and with plenty of examples!

What is a check?

Check occurs when a king is under attack and threatened to be captured by one of the opponent’s piece. If your king is in check, you have to get out of it immediately.

Below, you can find an example of what a check looks like. The white bishop on b5 is attacking the black king on e8. So the black king is in check. Black now has to make a move to protect the king.

Note that a check is not the same as a checkmate. If you don’t know the difference, I strongly recommend you to read my article on the difference between check and checkmate first.

As mentioned before, there are three different ways to deal with a check: moving the king, blocking the check, and capturing the checking piece.

Let’s go over and example of each of these cases.

Of course, you have to make sure that the new square you are moving the king to is not current under attack. Because you can’t move your king into a new check.

In the position below, the black queen is checking the white king. White can move the king to c3, c4, d2, d4, e2, or e3 and sidestep the check.

One exception to this rule is that you can’t castle when in check.

Another way to protect your king is to place one of your own pieces between your king and the opponent’s piece giving the check.

Fortunately, the white bishop can move all the way back from f7 to a2 to shield the king from the check.

However, you always have to be careful when you block a check this way. Because you are voluntarily placing one of your pieces in an absolute pin.

Your opponent can sometimes use this to their advantage to win a piece. So carefully check if it’s safe to block the check with a piece and consider your other options as well.

The last way to get rid of a check is to simply capture the piece giving the check.

You don’t always have this option available. But when you do, it’s often the strongest response to a check.

Can the king attack when in check?

Your king can still capture other pieces when it’s in check. So in the position above, you can capture the queen with either the white bishop or king.

Of course, you can’t capture a piece if that would place your king into a new check.

For more information, read my article on attacking with the king.

Can you safe this king?!

Below you can see the first position I mentioned in this article a second time.

With all the things you learned so far, can you find all the ways that black can deal with the check by the white bishop?

Answer: black can move the king to three different squares, the white bishop can be captured by the black queen, or the check can be blocked by moving the pawn on c7, knight on b7 or f6, or the bishop on c8.

Not noticing a check

So when you are in check, you have to do something about it.

But what if you didn’t notice that your king was in check and made another move?

This happens more often than you might think among beginners, because it’s not mandatory to say check out loud.

If your king is still in check after you have made your move, then that move is considered an illegal move. What happens next depend on the time control you are playing.

In a classical chess game, your opponent will let you know that your king was in check, you’ll have to take back your move, and you’ll get to make a new move that addresses the check.

However, the touch-move-rule still applies here. So if you can deal with the check by using the piece you tried to move before, you have to use that piece. Even if there are better ways to undo the check.

This will often lead to a scenario where you’ll be forced to lose material, even though you could have simply moved your king.

Only if it’s impossible to deal with the check by using the same piece do you get to move a different piece.

If your opponent also doesn’t notice that your king was in check, the game continues as normal. If either player notices the mistake on a later move, you’ll have to retrace all the moves and make a legal move instead.

In this case, it’s best to let the arbiter know as well, since you might receive additional time on the clock.

In faster time controls such as bullet, blitz, or rapid chess your opponent can normally claim a win immediately if you didn’t notice the check.

However, your opponent has to wait until you pressed the clock. If you made a move and noticed your mistake before pressing the clock, you get to correct your mistake.

Moreover, if your opponent doesn’t claim the victory right away and makes a move instead, then the game continues as normal. Your opponent can’t claim a win after making a move.

In some cases, the tournament organizer can let you redo your move and impose a time penalty when you don’t notice the check, instead of a direct loss.

You can move your king to safety when it is in check. However, you can also block the check or capture the checking piece.

If you didn’t notice the check in a standard game, you have to take your move back and play a different move. If possible, you have to use the same piece according to the touch-move rule.

In faster time controls, your opponent can normally claim a victory if you didn’t protect your king.