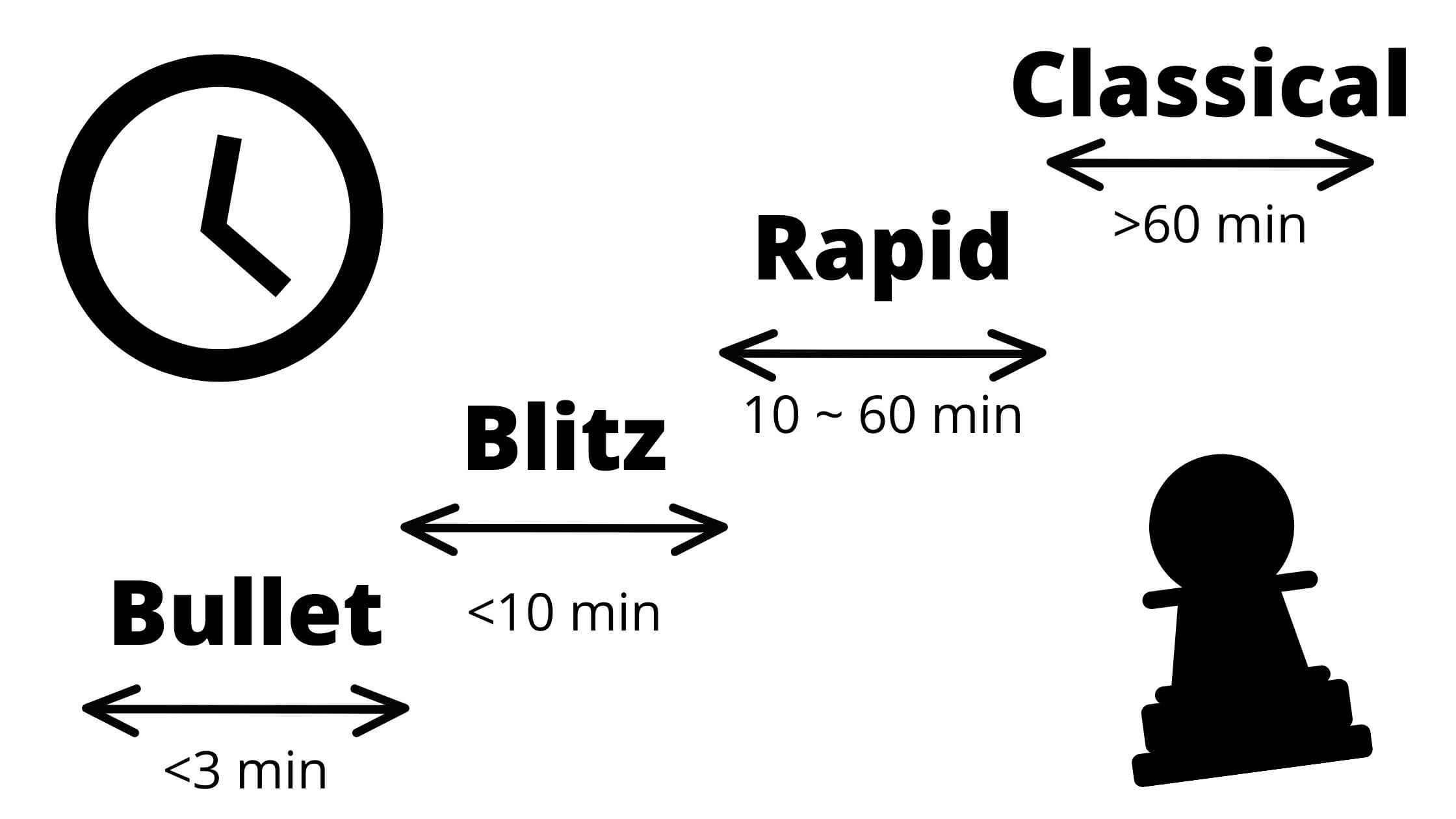 To prevent a game from going on forever, most chess games are played with a clock. Depending on how much time each player gets per game, the different time controls can be categorized as classical, rapid, blitz, and bullet.

Each of these categories have multiple time controls. So things can get confusing really quickly.

Of course, you never want to start a chess game without understanding how much time you’ll get.

So let’s start by taking a look at all the standard time controls used in chess.

In a game of classical chess, each player gets at least 60 minutes to make all their moves. In most classical time controls, players can get additional time after making a certain number of moves. So a classical chess game can easily take over 5 hours to finish.

The classical time control is used for serious matches and events such as the US chess championship and the world championship.

The classical time control most commonly used for FIDE events gives each player 90 minutes for the first 40 moves, followed by 30 additional minutes for the rest of the game, with a 30-second increment from move 1 onwards.

In a game of rapid chess, each player gets between 10 and 60 minutes for the entire game. This means that a rapid chess game normally finishes in under 2 hours.

The rapid time control is a good option if you want to play a faster game of chess, but still want to have enough time to think before each move you make.

In most rapid chess events organized by FIDE, each player gets 15 minutes plus a 10 seconds increment starting on the first move.

In blitz chess, each player gets 10 minutes or less to play the entire game. This time control is all about playing good moves quickly, rather than taking your time to find the best move.

Since each player starts with very little time on the clock, blitz games are often won or lost because one of the players ran out of time. Moreover, the time pressure frequently leads to silly mistakes and blunders.

The blitz time control used by FIDE for most of their events is 3 minutes per player with a 2-second increment per move.

When playing bullet chess, each player gets 3 minutes or less for the duration of the game. In this time control, you have to make your moves almost instantaneously or risk losing on time.

Many players enjoy this fast time control. It certainly gets your heart beating faster!

You can easily play over 20 bullet games in the same time it would take to play a single game with classical time controls.

However, the bullet time format is rarely used in chess tournaments or FIDE events.

Some of the most commonly played bullet chess time controls include:

For more information, also read my article on bullet chess.

How to read chess time controls

So you now know the differences between the 4 major time controls used in chess.

Unfortunately, time controls are normally written down in shorthand, which isn’t easy to understand for beginners. So let’s take a look at how to read and understand the chess time controls.

Let’s start with the bullet, blitz and rapid time controls.

These time controls are normally written in the “A|B” format. The first number refers to the number of minutes you get at the start of the game. The second number shows the increment in seconds you get on each move.

So when you see “3|2” this means you get 3 minutes at the start of the game, and you gain an additional 2 seconds after every move you make.

Similarly, a 10|0 time control indicates that you get 10 minutes for the entire game with no increment.

If you only get a fixed time for the entire game without bonus time, delays, or increments, the standard notation is “G/X”.

The “G” stands for “game” and the “X” will indicate how many minutes you get for the entire game.

So a G/60 time control means you get 60 minutes for the entire game.

Most classical time controls will provide bonus time after making a certain number of moves. In this case, the time control normally looks like “A/B SD/C”.

B will indicate how many minutes you get to make your first A number of moves. After that you’ll get C minutes for the rest of the game. The “SD” stands for sudden death, indicating that this is the last bonus time.

For example, a 40/90 SD/20 time control means you start with 90 minutes to make your first 40 moves. After making move 40 you get an additional 20 minutes to finish the rest of the game.

Finally, classical time controls can also include delays or increments. These are normally added at the end of the notation.

Now that you understand the notation used for classical games, let’s see if you make sense of the “40/90 SD/30 +30” time control that is used in most FIDE events.

Hopefully you realized it means you start with 90 minutes for your first 40 moves, after which you get 30 extra minutes for the rest of the game. And during the entire game, you get 30 seconds increment after every move you make.

Above you learned about the different formats used to write down a time control. But sometimes the notation can be mixed. For example, the “A|B” can be used for classical time controls as well.

Online chess vs over the board chess

The online attention span of an average person is less than 8 seconds. So it’s no surprise that most online chess players don’t want to wait very long for their opponent to make a move.

As a result, time controls used when playing chess online are a lot shorter than the ones used for over the board games.

A striking example is bullet chess. According to Chess.com, the bullet time control is the second most popular time control. However, FIDE doesn’t even organize over the board tournaments with this time control.

The best time control to learn chess is the classical time format. In classical games you have plenty of time to carefully consider each move you make, and you don’t win or lose the game due to silly blunders.

After the game, you can analyze your moves to see if you missed anything and if you chose the right plan. This process will help you improve your chess quickly.

The rapid time control is also fine if you don’t have enough time to play classical games. But try to play games that last longer than 15 minutes.

Blitz and bullet games are fun to play but generally don’t help you to develop a deeper understanding of the game. Since most of these games are decided by time trouble or blunders.

You might also want to read my article on blitz vs rapid chess for more information.

How to improve your time control in chess

Time management is important regardless of which time control you play. Even in classical chess you can quickly run out of time if you think for 5 minutes for each move you make.

I thoroughly talked about how to manage your time in a previous article on how to play chess with a clock. I highly recommend going to that article and scrolling down for the full discussion.

However, here are the key takeaways to improve your time control:

A time delay means the clock doesn’t start for a few seconds at the beginning of your turn. A time increment means you gain additional time at the end of your move.

So you get the delay when your opponent presses the clock and starts your turn, whereas the increment is received after you make your move and press the clock yourself.

At first glance, both the delay and increment might seem the same. But there are a few subtle differences.

A delay prevents a player from losing on time, as long as the player can move faster than the delay.

However, this is actually very difficult to pull off since most delays are only a few seconds long.

So you’ll have to think about a move and make the move in mere seconds. Unless you are in an endgame, you will probably play slower than the delay.

An increment prevents players from spending too much time during the early phase of the game.

In time controls with an increment, the initial number of minutes you start with is normally a lower. But due to the increment, the total play time at the end of the game is roughly the same.

However, the biggest difference between a time delay and time increment is that you can only gain time on the clock with an increment.

In games that have a time increment you can often see players with more time on their clock than they started with during the opening, because they can play the opening moves they memorized faster than the increment.

So it’s no surprise that time increments are a lot more popular than time delays.