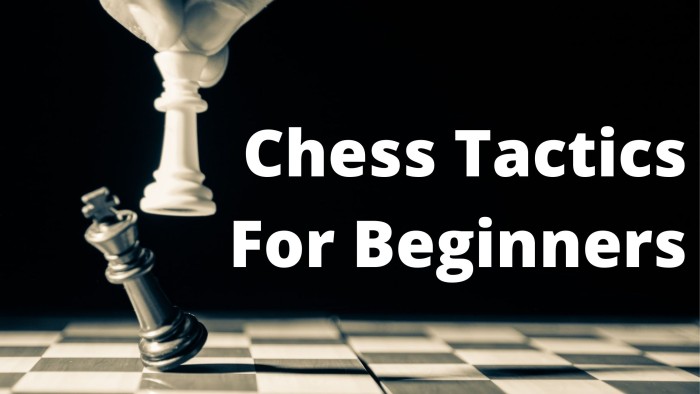 Did you know that most chess games by beginners are decided by tactical combinations? Winning a piece or a few pawns is almost a guaranteed victory.

So before memorizing tons of opening theory, analyzing deep strategical plans, or studying endgames, you want to make sure you have a solid foundation of chess tactics.

There is no point in getting a good position if you’ll blunder a piece on the next move anyway, right?

So let’s look at 4 simple chess tactics that every beginner should know. Mastering these will surely help you win more games!

A fork is one of the basic chess tactics in which one of your pieces attacks two or more of your opponent’s pieces or squares at the same time.

Below you can see a simple example of a queen fork. The white queen attacks black’s bishop and knight simultaneously.

Since you can only move one piece at a time, black can only save one of his pieces. So on your next move, you can capture the one that didn’t move!

Any piece on the board can be used to fork your opponent’s pieces.

Forking your opponent is easiest with pieces that can move a lot of squares, such as the knight, bishop, rook, and queen.

Pawn forks and king forks are also possible. But they are less likely because these piece can’t attack a lot of squares simultaneously.

Of course, you can also attack more than two pieces at once. Below the knight forks the opponent’s king, queen, and rook. This is called a “family fork”.

The knight is often the strongest forking piece, because it has a low piece value and can move in a unique L shape that no other piece can replicate.

Keep in mind that not every fork guarantees winning a piece. Sometimes your opponent can defend the fork.

Below, you can find the three most common ways to defend against a fork.

In the first example, black can simply move the attacked rook to b7 or g6 to defend the other piece under attack.

In the second example, the black bishop can simply capture the white queen.

And in the third example, black can move his bishop to d5 and check the white king. Since white has to move his king out of the check first, black can then move the knight away to safety.

Finally, it’s important to remember that you can attack not only pieces, but important squares as well!

For more information and related puzzles to try out, you can read my article on chess forks.

The discovered attack is one of the basic chess tactics in which you move one of your pieces out of the way to reveal an attack by a previously blocked piece.

Below you can see an example of a discovered attack. The white bishop on d3 is blocking the white rook on d1 from capturing the queen on d8.

White can move his bishop away to surprise black with a discovered attack.

However, in the specific position above, white doesn’t really gain anything from the discovered attack. No matter where you move the bishop, the black queen will simply move away.

To make the most out of a discovered attack, you want to create a double attack. You can do this by making sure that the piece you are moving away is also attacking something.

The position below is very similar to the position shown above. But this time, the black king is on g8 instead of f8.

Now white can move the bishop to h7, unleashing the discovered attack and checking the black king simultaneously.

Since black has to move the king first, you can capture the black queen on your next turn.

A special type of discovered attack is the discovered check. In this case, you move one of your pieces to reveal a check by a previously blocked piece.

In the position below, the white pawn is blocking the white bishop from giving a check. So by moving the white e5 pawn to e6, you are giving a discovered check to the king and attacking the black queen with your pawn simultaneously.

You can also target important squares with a discovered attack. This works especially well if there is a checkmate threat, but it can be used to take control of strategically significant squares as well.

Below are two positions that show this idea.

In the second position, white can play the knight to f5 to attack the black queen on d7 with the rook and threaten to checkmate on g7 using the queen and knight.

The pin is one of the basic chess tactics in which you restrict the movement of one of your opponent’s pieces. This can be achieved by threatening to capture an even more valuable piece if the pinned piece moves.

Only bishops, queens, and rooks can pin an opponent’s piece.

Simply pinning a piece isn’t always enough to directly win material. However, since the pinned piece can’t move, you can often bring over additional pieces to attack it several times.

Let’s look at the two examples below. The only difference is the position of the black rook and knight.

In the first position, white just played his bishop to f5 to pin the black rook. No matter what black does, white gets to capture either the black rook or queen. So in this case the pin directly leads to material gain.

In the second position, white doesn’t directly want to capture the black knight with the bishop, because these pieces have the same value.

Instead, white will play moves like rook to e1 or queen to g4 to attack the black knight a second and third time. And hopefully win a full piece later on.

As long as the black queen stays on c8, the black knight can’t escape the attack.

There are two types of pins in chess: the absolute pin and the relative pin.

In an absolute pin, you are not allowed to move the pinned piece because it would expose your own king to a check. This would be an illegal move.

Below you can find two examples. In the first position, black’s knight is in an absolute pin and can’t move.

You can also pin a piece by threatening checkmate on a square behind the pinned piece.

For example, in the diagram below the black knight is pinned because if it moves, the white rook can give a back-rank mate on d8.

A skewer is one of the basic chess tactics in which you take advantage of two of your opponent’s pieces that are aligned on a file, row, or diagonal. This involves attacking a high value piece such as rook, queen or king that is in front of a less valuable piece.

Only bishops, rooks, and queens can perform a skewer because they are the long rang pieces.

As soon as the black king moves, the white bishop can capture the black rook.

This is why skewers are also sometimes called x-ray attacks or reverse pins.

Many beginners are unsure what the difference is between skewers and pins. In both cases, you take advantage of two opponent’s pieces that are aligned on a file, row, or diagonal.

Let’s take a look at the two positions below. The only difference is the position of the black queen and knight.

The fastest way to improve at chess as a beginner is to study basic chess tactics.

Not only will this help you win your opponent’s pieces, it will also prevent you from accidentally blundering a piece of your own.

Forks, pins, skewers, and discovered attacks are 4 basic tactics that every chess player should know. But of course, there are a lot more tactical patterns to learn later on.

If you want to practice what you have learned, you can try solving these simple chess puzzles.

Once you have a good grasp of chess tactics, you should also learn the basic of positional play.

To get started, you can ready my article on basic chess strategies for beginners.

What is the difference between a double attack and a fork?

Below, you can see the two types of double attacks. In the first position, white moves his b5 knight to c7 to fork the black rook on a8 and queen on e6.

In the second position, white moves the bishop to h7 to check the black king and simultaneously unleashing the discovered attack of the white rook on the black queen along the d file.

What is the difference between a fork and a skewer?

Below you can see the difference between a fork and a skewer more clearly. In the first position the white queen is forking the black rook on b4 and the mating square on g7. In the second position, the white bishop performs a skewer on the black king and rook along the diagonal.

What is the difference between a skewer and a pin?

The difference between a pin and skewer is clearly shown in the two diagrams below.

What is a royal fork in chess?

When a royal fork is performed by a bishop or rook, your opponent’s queen can still capture your forking piece.

Below you can see an example of a royal fork.

What is a family fork?

Below you can see an example of a family fork.