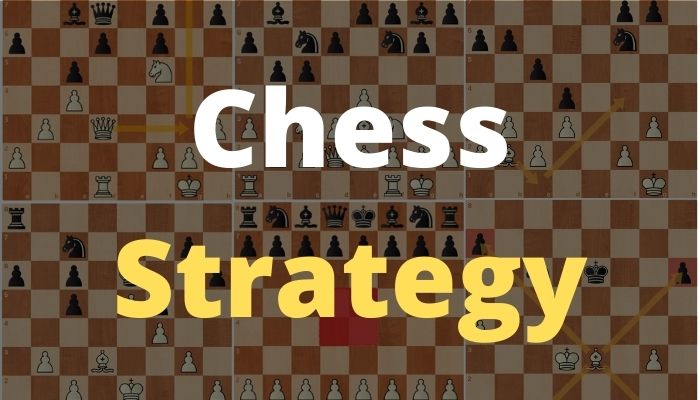 Many chess games are decided by tactical combinations that win material. But if you want to become better at chess, you should also study the fundamentals of chess strategy.

A good understanding of the basic chess strategies will help you to get a positional advantage in your games.

And similarly to how “luck favors the prepared“, game-deciding tactics are more likely to present themselves if you have a position advantage.

Let’s take a look at 10 easy chess strategies and tips that you can start to implement in your games today.

1. Develop all your pieces

Each player starts the game with 16 pieces. And to win the game, it’s important that you use all your pieces together.

Many beginners make the mistake of moving their queen several times at the beginning of the game. But although the queen is the strongest piece on the board, there is little she can do by herself.

In the position below, black has moved the queen around 3 times in the opening while white has developed both knights and a bishop. It’s clear that white already has a strategic advantage.

2. Bring your king to safety

While developing your pieces, you also want to make sure that your king is safe from danger. The easiest way to do this is by castling either kingside or queenside.

Of course, you always want to make sure that you are not castling your king into an attack. If all your opponent’s pieces are on the kingside, castling short might be more dangerous than not castling at all!

If you are no longer allowed to castle, you can always move your king to the side of the board one square at a time.

Make sure to move your king to safety before you start to attack your opponent’s king, or else you might leave your own king exposed for a counterattack.

In the position below, both players have brought their king to safety by castling kingside.

Note that in certain situations your king can be completely safe in the middle of the board.

This normally happens when the position is extremely closed or the queens have already come off the board.

3. Place your pieces on active squares

You should aim to place all your piece on active square on which they are doing something. Don’t just move your pieces around because you were told to “develop” your pieces in the opening.

Moving your pieces to a useless square is almost as bad as not moving them at all.

And since the chess position changes with every move that is made, this also means that you sometimes have relocate one of your pieces.

If at any point in the game you don’t know what to do next, take a careful look at your position and identify which of your pieces isn’t doing anything.

Then imagine where you wish that piece would be, and start find a way to move that piece to that square.

In the position above, the black pawn chain on b6, c5, and d4 is complety preventing the white bishop from having any impact on the game.

White decides to move his weakest piece (the bishop) to a move useful square on f4, where it is no longer limited by the black pawns.

A single pawn might not seem that important. But pawns are often referred to as the soul of the game. The pawn structure will often dictate what type of game you will be playing.

An open pawn structure allows for more exciting tactical games in which every move counts, while a closed position often leads to a slower game in which you can take several turns to place your pieces on their ideal squares.

As a beginner, you are probably not going to know all the different pawn structures that can arrive from the openings.

But some simple rules to remember are to:

Of course, there are many more factors and exceptions to consider when it comes to pawn structure. But these rules of thumb might already be enough to get an advantage over other beginners.

This gives white a huge strategic advantage and black will have a hard time protecting all the weaknesses in his pawn structure.

5. Control the center of the board

Although there are 64 squares on the chess board, not all squares are made the same.

The four squares in the middle of the board (d4, d5, e4, e5) are referred to as “the center” and are the most valuable squares on the board.

Most pieces are a lot stronger when placed in the center of the board or close to it. So it’s always a good idea to fight for the center.

You might have heard the phrase “a knight on the rim is dim” before. As you can see below, knights are a lot better when placed in the center. And the same holds for most other pieces as well.

Controlling the center with your pawns also give you the added benefit of grabbing a lot of space and lets you develop your pieces naturally.

Even if you play a modern chess openings and don’t fight for the center initially, you will have to strike the opponent’s center sooner or later.

6. Master the knight vs bishop exchange

Knowing when to exchange pieces and which pieces to exchange is an important part of the game. Of course, if your opponent’s piece is worth more points, it’s almost always a good exchange.

But it becomes more difficult to evaluate a piece exchange if both pieces are worth the same points.

You probably know already that knights and bishops are both worth 3 points. But this doesn’t mean that they are always equally strong.

So trading your bishop for your opponent’s knight is a good idea in a closed position and vice versa.

For a more detailed look at this material imbalance, you can read my article on the bishop vs knight exchange.

As an example, in the first position below the knight dominates the bishop, while in the second position the bishop is much stronger than the knight.

7. Grab space on the board

Space is a little bit of a vague concept that refers to the number of squares that you have control over.

Having a lot of space is great, because it lets you move your pieces around freely. Simultaneously, if your opponent has very little space, they will have a hard time developing their pieces to useful squares.

You normally have control over all the squares behind your pawns. So if you want to grab more space, you can start pushing some of your pawns forward.

Of course, don’t forget that you can’t move your pawns backwards. So make sure that you don’t create any weaknesses by pushing the wrong pawn forwards.

In the position below, you can see that white has grabbed a lot of space in the center and the queen side. And as a result, all the white pieces have found useful squares.

While black is in a pretty cramped position and the black pieces are blocking each other.

Not every attack needs to be aimed towards your opponent’s king. You can often win material or force your opponent into a bad position by attacking their positional weaknesses.

Some weaknesses to look out for are isolated pawns, backward pawns, double pawns, underdeveloped pieces, etc.

While attacking these weaknesses, your opponent will often be forced to place their pieces on bad squares to defend.

In the position below, you can see that white’s attack on black’s backward pawns has resulted in a strategic advantage.

Your opponent’s weaknesses might not always be easy to identify. If you need more help with this, you can read my article on positional imbalances in chess.

9. Use the principle of two weaknesses

In chess, it’s often possible to defend a single positional weakness with good play. But defending two weaknesses simultaneously is almost impossible. This is also referred to as the principle of two weaknesses.

So try to look for not just one weakness in your opponent’s positions but all the weak spots. And then find a way to attack two of them at the same time.

Another way to use the principle of two weaknesses is to use all your pieces to attack one weakness, and then quickly redirect your pieces towards the second weakness.

This works especially well if you have a large space advantage, because your opponent will have a hard time maneuvering the pieces around.

In the position below you can see how white is attacking black’s weak backwards pawn on d6. However, black has successfully defended the d6 pawn so far.

However, black’s king bad safety is also a weakness. So white changes the target of the attack to the second weakness by moving the queen to g3.

Although finding the right move to play for yourself is already difficult, finding which moves your opponent is planning to make is even more difficult.

But chess is of course a two player game in which both players are trying to win. So sometimes the best plan is to prevent your opponent from achieving their plan.

Prophylaxis is the idea of making moves not to improve your own position, but to prevent your opponent from making the moves they want to make.

You aren’t going to win the game by only making preventative moves. But a well-timed prophylactic move can delay your opponent for several turns. And you can use that time to reach your own goals first.

In the position below, you can see that black has a very bad bishop on b7. And black would love to reposition the bishop by moving it to c8 and eventually f5.

However, white realizes black’s plan and prevents it by playing Bg4. Now black will have to find a different way to bring his bishop back into the game, because it’s no longer possible to move the black bishop to c8 without losing it.

Using basic chess strategies in your games will give your positional advantages, which often result in material advantages as well.

However, chess strategy is a very broad topic and learning everything from just a single article is impossible.

Choose 3 or 4 strategies from this list and try to implement them in your next game.

I hope this will help your win more games and become a better chess player!

For more information, you can also read my article on how to win more chess games or why chess is so difficult to master.