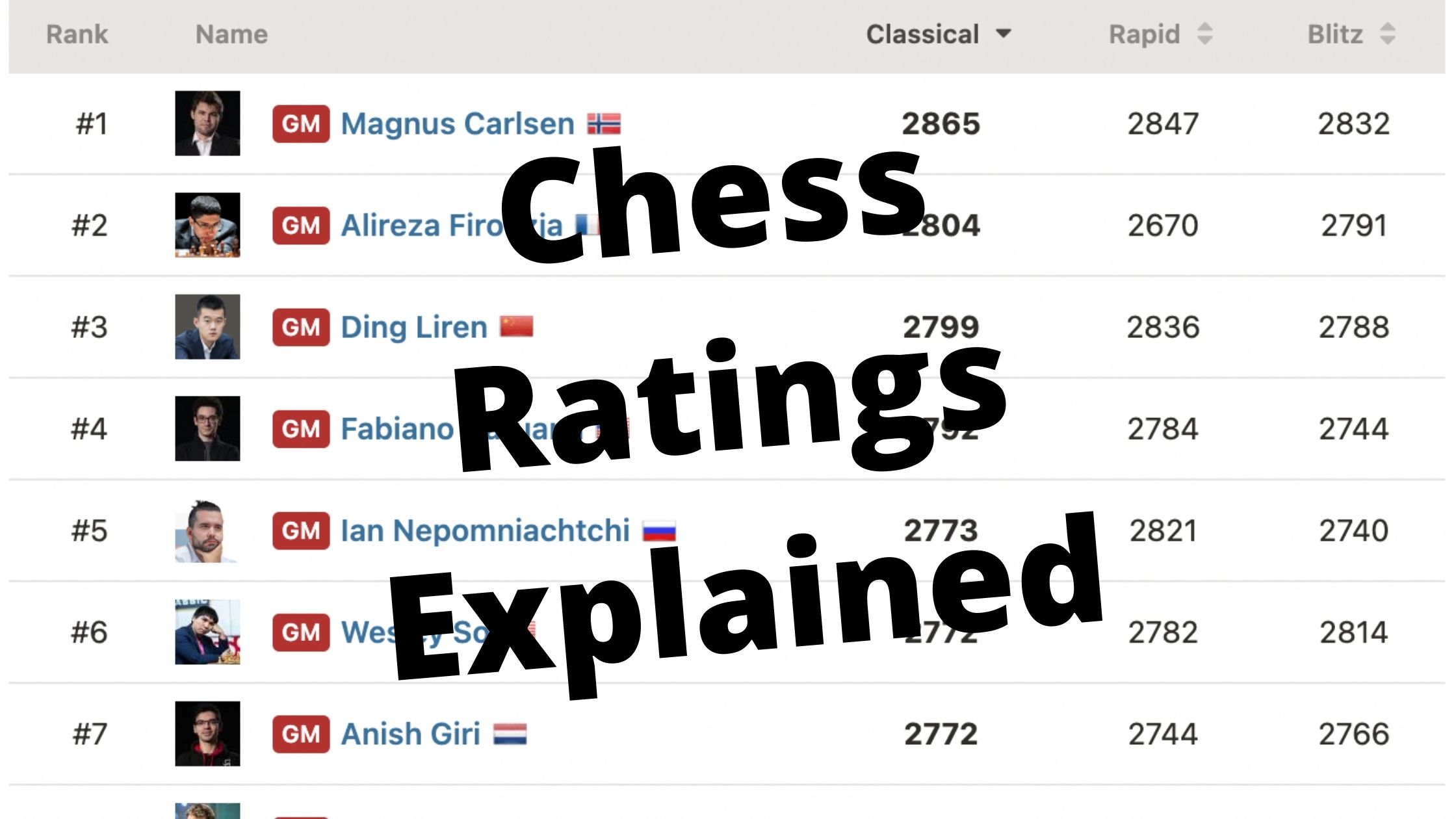 Every chess player is assigned a rating. You can often see them besides the names of players.

But if you are new to chess, these numbers probably don’t really mean anything to you. You might not even have a chess rating yourself yet.

This article will explain everything you need to know about the rating system in chess.

A chess rating is a number of three to four digits that represents someone’s playing strength. The higher the rating, the better a person is at the game.

Ratings are also used to match players of equal strength. Of course, you don’t want to play someone that is too strong or too weak. If you find an opponent with a similar rating, you can be sure that you get to play someone around your own level.

In many chess tournaments, the players will be divided in different rating brackets to make sure everyone gets to play a fun game.

Depending on how good your opponents are and on your results, your rating might go up or down over time. Hopefully, as you become better at the game, your rating will also go up.

For the competitive chess players among us, you can also use your rating to see where you are on the national or even worldwide ranking.

How can I get a chess rating?

If you are a member of a chess federation, you’ll automatically get a chess rating if you play games at your chess club or if you participate in chess tournaments. The results of all your games are recorded and send to the chess federation, which will then calculate your rating.

Since each chess federation uses their own rating system, it can be difficult to compared ratings across countries. That’s why ratings from the International Chess Federation (FIDE) are used for international events.

You can only get a FIDE rating by participating in tournaments acknowledged by FIDE. So the games you play at your local chess club and small local tournaments don’t count towards your FIDE rating.

Can I get a chess rating online?

Some chess federations have recently started to offer online ratings that are separate from the standard “over the board” ratings. However, these online chess ratings aren’t acknowledged by most in-person events because it’s easy to cheat when playing online. So to get a normal chess rating, you’ll have to play games in person.

Most online chess websites also provide you with a rating. These ratings are merely for matching players for games on their own websites and can’t be used as an official rating when signing up for tournaments.

However, a small comparison between USCF ratings and the ratings of several websites show that your real rating and online rating might not differ too much, as long as you play longer time controls online.

What should my chess rating be?

If you don’t have a chess rating yet, it’s difficult to estimation what it should be. There is no fixed chess rating that each new player starts from. Ratings for new players are calculated based on the results of their first few matches played over the board.

Playing lots of games online (>30) with longer time controls might give you a good first impression of what your rating should be. But keep in mind that your real rating can easily be 100 points higher or lower than your online rating.

How are chess ratings calculated?

There are different chess rating systems, but the Elo rating system is the most commonly used one. Since both the USCF and FIDE use this system, let’s look at how Elo ratings are calculated.

The Elo rating system basically consists out of two parts. First it calculates your chance of winning the game based on the rating difference between you and your opponent.

If your opponent has the same rating as you, your chance of winning will be 50%. Of course, your expected outcome will go up if your rating is higher than your opponent’s rating.

For example, if your rating is 100 points higher the chance that you win increases to 64%, and with a 200 point rating difference you are expected to win 75% of the time.

As you can see, the relationship between the expected result and difference in rating isn’t linear. So even against the world champion, you’ll always have a tiny chance of winning!

Below you can see the formula used to calculate the expected winning chances of both players. Where E stands for the expected outcome for player A and B, and R is their respective ratings.

Next the Elo system compares the actual result of the game with the predicted outcome and adjusts your rating accordingly.

For example, let’s say you have a slightly higher rating than your opponent and have a 55% chance of winning. If you end up drawing the game, your rating will go down since a draw counts as 50%. So it’s possible to lose rating points, even if you don’t lose the game.

Similarly, if your rating is a lot higher than your opponent, you don’t earn a lot of rating points by winning, because you had a very high chance of winning to begin with.

Below you can see the formula used to calculate your new rating. R’ and R stand for your new and old rating, E is the expected outcome, and S is the real outcome.

As you can see, there is also a K-factor in the above equation. The K-factor will determine how quickly you will win or lose rating points.

Different chess federations use different K-values when calculating ratings, and the K-values differ from person to person.

Normally, your K-value is really high when you are just starting out, and slowly decreases with the number of games you play. This helps new players quickly achieve an appropriate rating.

In short, how quickly your rating will increase depends on how strong your opponents are, how well you performed against them, and by your personal K-factor.

How do chess ratings work?

As mentioned before, if you know your rating and your opponent’s rating, you can calculate your winning chances and your expected outcome.

But you probably don’t want to take out your calculator every time you face a new opponent. So I have calculated what your expected outcome is depending on some rating differences.

But you probably noticed something strange already…

Can I Improve my chess rating?

How to improve your chess rating fast?

The fastest way to improve your chess rating is to play a lot of games. Even if you win all your games, you still need to play a lot of games before you see a significant increase in your rating. Moreover, playing against strong players will help you earn more rating points with every game you win.

Although simply playing more games can be a way to learn more about the game, a focused training schedule can speed things up considerably.

For beginners, the best way to improve quickly is to focus on the opening fundaments and tactics. More experienced players will need a more balanced training schedule and should analyze their own games to improve their chess skills.

How long does it take to improve my chess rating?

If you are a relatively new chess player, your chess rating can improve very quickly. Not only are the chess fundaments easy to pick up, but you will also have a very high K-factor.

However, more experienced players normally won’t see very drastic changes in their rating. Gaining more than 100 rating points in a single year is a huge achievement for most players.

Also keep in mind that most chess federations don’t keep a live record of all the ratings. So your rating will only be updated at set intervals throughout the year.

Even if you play a great tournament tomorrow, you might have to wait several months to see your updated chess rating.

What is a good chess rating?

What you consider a good chess rating is completely subjective. Most players are happy, as long as they can see their rating slowly increase year over year. However, the average chess rating for club players is roughly 1650. So you can set that as a personal goal if you are just starting out.

For more information, you can read my article on the average chess rating.

Can your chess rating go down?

This means that if you are the weaker player, your rating will only go down if you lose the game. However, the bigger the rating difference, the smaller your rating decrease will be.

However, if you are the stronger player, your rating will go down if you either lose or draw the game. Of course, losing a game will always lead to a bigger decrease than drawing a game.

Why is my chess rating dropping?

If you lose more games than you win, you’re likely to see a decrease in your rating. However, you might also notice a rating drop if you draw against an opponent rated much lower than you.

New players see bigger swings in their chess rating because their K-factor is still very high. If this is the case for you, there is no need to worry if you see your rating dropping suddenly. You are likely to win back most of the rating points by winning just a few games.

Why is my chess rating so low?

If your chess rating is very low, you might be missing out on some of the chess fundamentals such as opening principles, basic tactical combinations, simple checkmating patterns, stalemate rules, etc.

If you show one of your games to a stronger player, they can probably give you some tips or ideas on how to improve.

Most chess players will end up with a rating between 1500 and 1800. However, if you are really good at chess and achieve a very high FIDE rating, you can apply for an internationally recognized chess title.

Each title has different rating requirements, shown in the table below:

However, for women the rating requirements are different. You can learn more by reading my article on what is an average and grandmaster ratings.