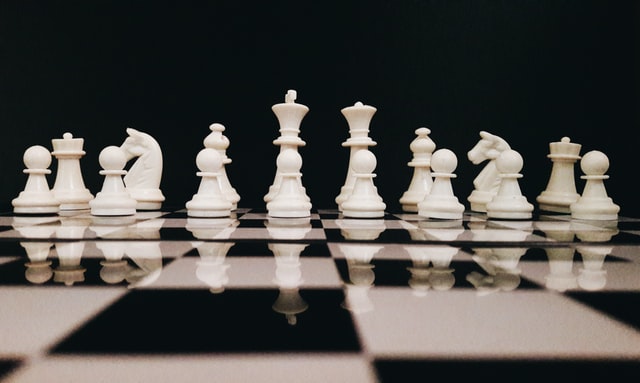 You can find 32 chess pieces on the chess board, which are divided into 6 distinctly unique types.

Of course, all these chess pieces have their own name and are shaped differently.

You might already be familiar with some of the names of the pieces, such as the king and queen. But putting the right name with the right chess piece can be challenging at first.

There are many chess sets you can buy. And in each chess set, the pieces look slightly different. Moreover, when playing online or reading chess books, each piece is represented by a symbol.

So let’s go over the names of all the 32 chess pieces and see what they look like, so you will never be confused again about which piece is which.

The king is the most important chess piece. You only have one king, which starts on e1 for white and e8 for black.

The king in chess can move one square in any direction and can also do a special move called castling together with the rook.

Just like chess sets, chess symbols also can come in lost of different styles. Below you can find several examples of symbols representing the chess king.

As you can see below, most of these symbols still have a small cross on top, but there are a few exceptions. You can recognize the chess king by the crown with rounded shapes.

So the king symbol only represent the top side of the physical king piece.

The queen is the strongest piece on the chess board. You start every game with only a single queen, but you can get extra queens when one of your pawns reaches the opposite sides of the board and promotes.

The chess queen can move horizontally, vertically, and diagonally for as many squares as she wants.

In most chess sets, the queen is the second-largest piece on the board and has a pointy crown.

Different symbols can be used to represent the chess queen in books or online. But most them look pretty similar.

You can recognize the queen by her pointy crown, which is distinctly different from the crown worn by the king.

So the queen symbol only represent the top side of the physical queen piece.

The rook is a long range piece that can be very strong in endgames. Both players start the game with two rooks, one in each corner of the board.

You can move the chess rook horizontally and vertically for as many square as you want, and the rook can also perform a special move called castling together with the king.

Similar to the physical chess pieces, the chess symbols used to represent rooks all look very similar no matter which set you are using. Moreover, the pieces and symbols actually look very similar.

Below you can find some examples of what rooks look like:

The bishop is another long range piece that can be useful throughout all the stages of the game. You start the game with two bishops on c1 and f1 for white and c8 and f8 for black.

The chess bishop can move and capture only diagonally, which means that a bishop can only reach half of all the squares on the board, no matter how many moves you make.

You can recognize a bishop by its top half which represents a miter, the traditional headdress worn by bishops. Moreover, in most chess sets the bishop has an indentation on top, but there can be some exceptions.

Although the physical bishop pieces might all look pretty similar, the chess symbols used to represent them can be very diverse.

Just like the piece, the symbol represents a bishop’s miter. However, the way that this is illustrated varies widely among chess sets.

Below you can find several example of what bishop look like symbolically:

As you can see, some of these bishops have a cross on them. Don’t confuse these pieces with the king, which normally has a cross on top of its crown.

The knight is a unique piece in chess that has the ability to jump over other pieces. You start the game with two knights, one on b1 and one on g1 as white, and on b8 and g8 as black.

The chess knight moves in an L shape, meaning you can move two squares horizontally and one square vertically or vice versa. This movement pattern is very different from the other pieces, so it can take a while to master.

The knight in chess looks like a horse. I’m not sure where the actual knight himself went. Perhaps he fell off his steed?

The symbols used to represent knights in chess are all very recognizable. Although the exact symbol might change a little, they always look like a horse and resemble the physical piece.

Below you can find some different symbols for the knight in chess:

The pawn is the weakest piece on the chess board. However, several pawns working together can be a powerful force that is difficult to stop.

The pawn in chess can move one or two squares forwards on the first move, and only one move on every subsequent move. Instead of capturing forwards, the pawn captures diagonally.

Moreover, the pawn is the only piece that can’t move backwards, can promote when it reaches the opposite side of the board, and can take other pawns on passant.

As you can see, the pawn has a lot of special movement rules compared to the other pieces.

There is a little move variance when it comes to the symbols used for pawn in books and online. Some sets have slightly more stylized pawns than others.

In general, the symbols used for pawns contain a small circle on top, a slightly wider midsection, and a broad base.

You can find several examples of the symbolized pawns shown below:

If you have read this far, you hopefully know what all the pieces in chess are called and what they look like.

However, if you are still unsure on some things, the following questions might answer them for you.

What are the 16 pieces in chess called?

The 16 pieces in chess are divided in 6 different types that are called the pawn, knight, bishop, rook, queen, and king. You start the game with 8 pawns, 2 knights, 2 bishops, 2 rooks, 1 queen, and 1 king.

Which chess piece is the king?

In most chess sets, the king is the tallest of all the chess pieces. Often you can also recognize the king by the cross on top. In the starting position, the white king is placed on e1 and the black king on e8.

How can you tell the king and queen apart?

You can tell the king and queen apart by their size. In most chess sets, the king will a bit slightly larger than the queen. Moreover, you can normally find a small cross on top of your king that is absent on the queen.

What do the different pieces in chess look like?

Each chess piece looks differently. The king and queen are the tallest pieces and both wear a distinctly different crown; the knight looks like a horse; the bishop looks like a miter; the rook looks like a castle tower.

What piece was originally called the elephant?

The precursors to chess used slightly different pieces and names. One of these pieces was called the elephant, which is nowadays replaced by the bishop.

What are the original names of each chess piece?

In the early version of chess, the original names of the pieces were the king, advisor, elephant, horse, chariot, and foot-soldier. Nowadays, these pieces are called the king, queen, bishop, knight, rook, and pawn, respectively.