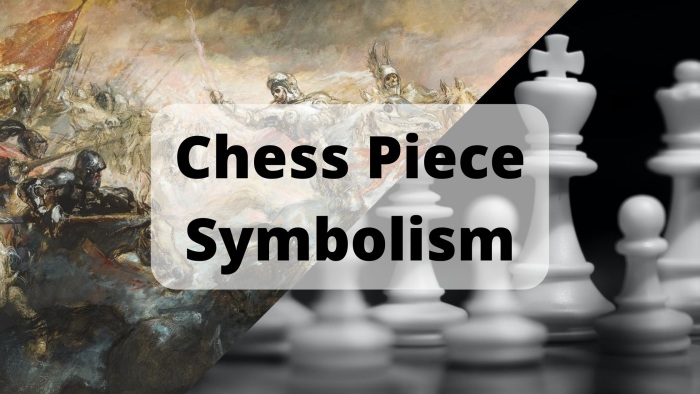 You can find 6 different pieces on the chess board. And behind each piece you can find interesting history, meaning, and symbolism.

So let’s take a closer look at what each piece looks like, what the piece represents, and how strong it is on the chess board.

Just like chess sets, chess symbols also can come in lost of different styles. Below you can find several examples of symbols representing the chess king.

As you can see below, most of these symbols still have a small cross on top, but there are a few exceptions. You can recognize the chess king by the crown with rounded shapes.

What does a king symbolize in chess?

The king in chess represents a medieval king or leader of an army. The battle only finishes when one of the kings is killed or captured and can no longer lead his army. The king also starts in the center of the board, further emphasizing its central role in the game.

How much is the king worth in chess?

On the battlefield, losing your leader or king will normally lead to an instant defeat. The same hold on the chessboard. If you lose your king, you lose the game.

So the king is basically an invaluable piece. However, if you want to compare how strong a king is compared to the other pieces, you can assign roughly 4 points to a king in the endgame.

Learn how to move the king

In most chess sets, the queen is the second-largest piece on the board and has a pointy crown.

Different symbols can be used to represent the chess queen in books or online. But most them look pretty similar.

You can recognize the queen by her pointy crown, which is distinctly different from the crown worn by the king.

What does a queen symbolize in chess?

The queen is the only piece on the chessboard that represents a woman. As the king’s wife, she starts the game right next to the king on the board.

And as the old saying goes: “behind every successful man, there is a strong woman”. And this holds for the king and queen too!

Although the women in noble families rarely had a direct say in major decisions, they could often convince their husbands of their thinking. And important women would frequently engage in politics behind the scenes.

The queens on the chessboard are just as influential and often have to do all the dirty work, while the king stays safely at home behind his pawns.

How much is the queen worth in chess?

The queen is the strongest piece on the board and can move linearly and diagonally. The queen is worth 9 points, so she’s roughly as strong as two rooks or three minor pieces.

Learn how to move the queen

Similar to the physical chess pieces, the chess symbols used to represent rooks all look very similar no matter which set you are using. Moreover, the pieces and symbols actually look very similar.

Below you can find some examples of what rooks look like:

What does a rook symbolize in chess?

Rooks represent castles in chess and start the game at the corners of the board. In the starting position, it looks as if the two rooks form a wall to keep the army safe.

There is even a special move in chess called “castling“, in which you bring your king to safety and form a small fortress with your rook and pawns around the king.

Castles were often used to control strategically significant parts of the country and defend from invaders. Moreover, castles would house important people such as kings, queens, knights, etc.

The rooks on the chessboard are also quite powerful. But unlike the real castles, rooks can actually move.

How much is the rook worth in chess?

The rook is the second strongest chess piece and can move horizontally and vertically. The rook is worth 5 points, which makes it about half as strong as a queen.

Learn how to move the rook

You can recognize a bishop by its top half which represents a miter, the traditional headdress worn by bishops. Moreover, in most chess sets the bishop has an indentation on top, but there can be some exceptions.

Although the physical bishop pieces might all look pretty similar, the chess symbols used to represent them can be very diverse.

Just like the piece, the symbol represents a bishop’s miter. However, the way that this is illustrated varies widely among chess sets.

Below you can find several example of what bishop look like symbolically:

What does a bishop symbolize in chess?

As the name implies, the bishop can represent a bishop or a significant member of the church. Religion played an important role during the Middle Ages and most royal courts included several representatives of the church.

The church would often have an advisory role to the king. So you can find the two bishops right next to the king and the queen when the chess game begins.

How much is the bishop worth in chess?

The bishop in chess can only move diagonally and to squares of the same color. The bishop is worth roughly 3 points, which makes it just as valuable as a knight but less valuable than a rook or queen.

Learn how to move the bishop

The knight in chess actually looks like a horse. I’m not sure where the actual knight himself went. Perhaps he fell off his steed?

The symbols used to represent knights in chess are all very recognizable. Although the exact symbol might change a little, they always look like a horse and resemble the physical piece.

Below you can find some different symbols for the knight in chess:

What does a knight symbolize in chess?

The knight represents the protective knights in service of the king. The chess piece looks like the horse that the knight rides during battle.

During medieval times, strong soldiers that demonstrated their prowess and loyalty in the heat of battle would sometimes be knighted.

Most knights would also receive a castle and a large amount of land to rule in the king’s name. Perhaps that’s why the knight starts next to the rook on the chess board.

Most kings had several knights under their command. However, each player only starts with two knights.

The knight is also the only chess piece that can jump over other pieces of the horses they are riding.

How much is the knight worth in chess?

The knight in chess moves in a very unique “L” shaped pattern. This can make it feel like somewhat of a clumsy piece. But since it can move over other pieces, it can still be quite strong in the right situations. So a knight is worth 3 points, making it just as valuable as a bishop.

Learn how to move the knight

There is a little move variance when it comes to the symbols used for pawn in books and online. Some sets have slightly more stylized pawns than others.

In general, the symbols used for pawns contain a small circle on top, a slightly wider midsection, and a broad base.

You can find several examples of the symbolized pawns shown below:

What does a pawn symbolize in chess?

The pawn represents the foot soldiers in the army or the armed peasants. Every army consist out of a large number of low ranking infantry.

This is the same in chess. You start the game with 8 pawns, which is more than any other piece. And the pawns are the weakest pieces on the board. However, in any chess game, the pawns will form the backbone of your army.

The armed peasants normally live outside the castle walls. On the chessboard, you can also see that the pawns start on the second rank. While all the other important pieces start “inside the castle” between the two rooks.

However, once a pawn reaches the other side of the board, it can be promoted into a stronger piece. Which probably represents how soldiers that prove themselves worthy could sometimes become a knight or commander in the army.

How much is the pawn worth in chess?

The pawn is the least valuable piece on the board and only worth 1 point, because it’s very limited in its movement. Three pawns are roughly as strong as a bishop or knight.

Learn how to move the pawn

What does a chess board represent?

The chessboard with all the pieces on it resembles a battlefield. The two armies fight until one of the kings is captures or all the pieces have been killed. Each player gets to start on one side of the board, which represents their homeland.

Pieces in the army will have to move forwards, kill other pieces, conquer important squares and space, and finally trap the enemy king.

Physical chess boards can come in different sizes and can be made from various materials. However, the vinyl and wooden chess boards are the most commonly used.

Learn how to set up the chessboard