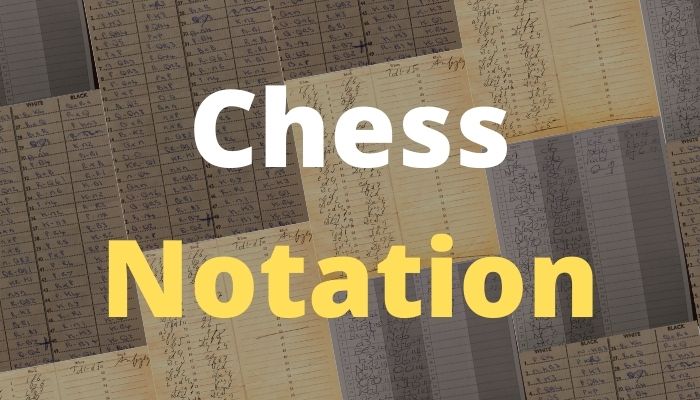 There are a lot of good reasons to learn how to write down and read chess moves using the algebraic notation.

It allows you to replay your own games, you can use it to study games from strong grandmasters, and it serves as a backup in case someone accidentally knocks over several pieces during a game.

But perhaps the most important reason to learn chess notation is because it’s mandatory to write down the moves in classical chess.

By the end of this article, you will be able to write down any move you could possibly make and read chess moves without a problem.

I know that chess notation can seem a little daunting at first. Especially if you see a scoresheet that is completely filled out.

To someone that never learned how to write down chess moves, it might be even less legible than your doctor’s handwriting!

But don’t worry, chess notation is quite simple and easy to learn.

The two most important things you need to know are what each square on the board is called and what the standard abbreviations for all the pieces are.

Everything else is pretty simple.

So let’s get started!

Square names on the chess board

You can find 64 squares on a chess board, and each square is denoted by a letter and a number such as a1, d4, and f8

On the bottom of most chess boards you can find the letters a to h, and on the sides you can see the number 1 to 8.

If you want to know what a specific square is called, you can simply look vertically to the bottom and horizontally to the side. In the diagram shown below, you can see how this works for the g5 square.

Of course, if you are playing with the black pieces, the numbers and letters will be in reverse order because you sit on the opposite side of the board.

Note that not all chess boards have the number and letters on the sides to help you. Especially luxury chess boards or boards made out of special materials such as glass or marble.

In that case, you have to count the rows and columns in your head.

Fortunately, I’m pretty sure you can count to 8 and know the alphabet up to the letter h.

There are 6 different pieces on the chess board: the pawn, knight, bishop, rook, queen, and king.

Since writing down the full piece names would be too much work, the piece names are abbreviated as follows:

Note how the knight is abbreviated with an N instead of a K, because the K already stands for king.

Moreover, you might have expected the letter P to be used as an abbreviation for the pawn. But for some strange reason, chess players have decided to simply omit it when writing down pawn moves.

How to write chess moves

When writing down chess moves, you only write down the abbreviation of the piece you are moving and the square it is moving to.

So you would write Ke5 instead of the much longer “king from d4 to e5”.

Remember that pawns don’t have an abbreviation. So when you are moving pawns, you only need to write the square your pawn is moving to.

So you would simply write e4 instead of “pawn from e3 to e4”.

Below you can see two positions from a game I played recently. White first played Qc2, after which black responded by playing b5.

Sometimes you can run into trouble when you use the standard algebraic notation. For example, when two identical pieces can make the same move.

Take a look at the position below as an example.

White has a knight on c3 and d4. Now if you wanted to move one of the knight to b5 or e2, you would normally write down Nb5 or Ne2.

But if someone looks at your game later, they won’t be able to tell which knight moved, because both knights can move to those squares!

In these cases, you would write down not only where the piece comes is moving to, but also where it is coming from.

You can do this by writing the file or rank the piece came from between the piece name and the square it is moving to.

So the knight move in the first position shown above would be Ndb5, and in the second position would be Nce2.

Below you can see another example. White’s d4 rook is attacked by the black pawn, so white want to play his d4 rook to d2.

Writing Rd4 or Rdd4 both wouldn’t work. So you would write R4d2.

Whenever you move one of your pieces to a square that is already occupied by one of your opponent’s pieces, you can capture that piece. The “x” symbol is used to indicated captures in chess notation.

The “x” goes between the abbreviation of the piece you are moving and the square it is moving to.

So if your bishop on b2 moves to e5 to capture a piece, you would write it as “Bxe5”. You don’t have to write down which piece was captured.

In the diagram below, white wants to capture the knight on f6 with the bishop. The correct way to write this move would be “Bxf6”.

As always, writing pawn captures is a little bit of an exception.

Since pawns don’t have any abbreviation, you write down the file that the pawn came from.

In the diagram below, black want to capture the bishop on f6 with the g7 pawn. The correct way to write this move down would be “gxf6”.

Now that you know how to write down the majority of chess moves, there are a few more symbols that you need to know for special cases.

The “=” is used when a pawn promotes at the opposite side of the board. You would first write down the pawn move, then the “=” sign, and then the abbreviation of the piece you want to promote to. For example, e8=Q or a8=R. You can read my article on how a pawn moves for more information on promotion.

Finally, at the end of the game you would write down the final score. You can write “1-0” if white wins and “0-1” if black wins the game.

You now know everything you need to know about chess notation and should be able to write down the moves during your own games.

I know that we went over everything pretty quick. So to practice a little bit, I have prepared several positions in which you have to write down the move correctly.

White wants to castle long in this position.

White wants to capture the g6 knight with the f5 pawn.

The correct notation would be “exg6#” or “exg6++”. Don’t forget that after capturing the black king is checkmated.

In the position below, white wants to move the c3 knight to e2.

The correct notation would be “Nce2” or “N3e2”. Notice how both knights can move to the same square, so Ne2 would be incorrect.

White wants to capture the f8 rook with the g7 pawn and promote the pawn to a queen.

White wants to play the f1 bishop to d3 in this position.

The correct way to write this move would be “Bd3”. After 4 difficult problems, I decided to include a simple one to finish. I hope you didn’t overthink it!

Besides the notation symbols we have looked at so far, there are also some evaluation symbols that you might come across.

You don’t need to use the symbols when writing down your own moves during a game. But you might see them in annotated games or chess books.

They indicate whether certain moves are good, bad, interesting, etc.

The most common evaluation symbols and their meanings are as follows:

!! – A brilliant move that is often counterintuitive or difficult to find.

! – A good move that will normally lead to a considerable advantage.

? – A bad move that might lose a small amount of material, result in a strategic unfavorable position, lose tempo, etc.

?? – A terrible move or blunder that will normally lead to defeat.

!? – An unusual or interesting move that deserves further examination, such as a speculative sacrifice or unclear dynamic compensation.

?! – A dubious move that is objectively bad but might give practical chances, such as setting up a trap for your opponent.

+- Indicates that white has a small advantage.

-+ Indicates that black has a small advantage.