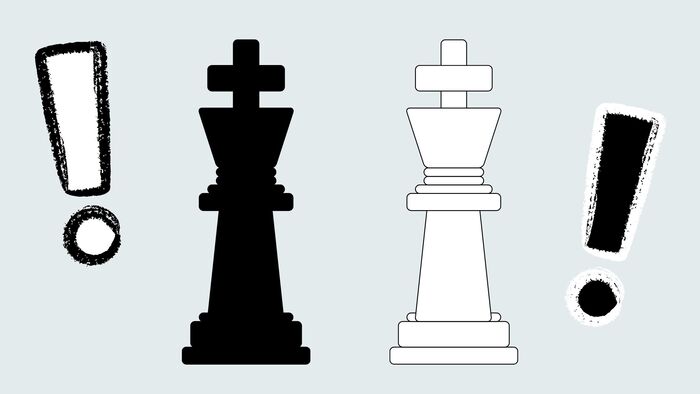 Chess memes are some of the funniest memes you’ll find on the internet. Even if you are not an avid chess player yourself, you’ll be able to appreciate most of the chess related memes.

So let’s look at the 20 most popular chess memes!

I tried to come up with a good mix of memes that anyone would understand, and memes that even experienced players would enjoy.

So I gave a short explanation for each meme, just in case you didn’t understand!

“This is chess, not checkers” is a famous line by Denzel Washington in the movie Training Day.

In a game of checkers, you have a lot less moves to consider on each turn because you can only move forwards and captures are mandatory. So checkers is easier to play than chess.

So this quote means that the situation is much more complex than it may look at first sight.

Playing chess with a pigeon meme

There are a lot of different versions of this meme. But the gist of it normally stays the same: you don’t want to argue with someone that knows nothing about the topic.

This meme even ended up in the urban dictionary under “pigeon chess”.

This is a funny chess meme about the names of the chess pieces and the way that the pieces move.

A bishop can only move diagonally. So if the bishop moves forward, he’ll be on a black square diagonal to Queen Elizabeth.

Since queens can move and capture diagonally, the queen could take the bishop if he were to move forward.

There are a lot of versions of this meme. But the ending is always an image of this old man with subtitles saying “Outstanding move”.

This meme is normally used sarcastically to make fun of someone’s idea.

In this case, bringing cocaine to the airport might indeed attract the police dogs, but also get you arrested.

In this particular meme, Chuck Norris is so good at chess, that already checkmated you without making any moves.

There are also versions of this meme in which Chuck Norris starts the game with just a single chess piece, and still checkmates you.

I simply don’t know how to play chess.

This is a meme that makes fun of people that use chess as a metaphor of life, even though they never played chess themselves.

There are many versions of this meme with different images and endings. But the beginning is always “life is like chess…”.

Kings are one of the strangest pieces on the chess board. Since you can’t move a king into a check, two kings can never attack each other.

So two kings on the chess board basically have to stare at each other while in opposition.

Meanwhile, all the other pieces on the chess board are attacking and capturing each other.

This is a completely different chess king meme, making fun of the harmless nature of the piece in chess, whereas historical kings were often ruthless dictators.

This meme also makes fun of the same discrepancy between kings in real life and kings in chess.

Does this meme need any explanation?!

It’s a funny combination between the infamous Rick Roll meme (shame on you if you clicked that link) and the ways a pawn moves in chess.

The original song lyrics is “never gonna give you up, never gonna let you down”.

But by removing a few letters, you end up with “gonna go up, never go down”.

Chess can be a super fun game to play if you don’t take it too seriously, play a fast time control, and it’s not a rated game.

However, when you are playing a rated game, the mood completely changes and everyone is super serious and trying their best to completely crush you.

No wonder, that many people find playing for a rating to be intimidating.

This meme perfectly describes my feelings after losing a game of chess.

Playing another quick game and forgetting about the last game is always fun.

Accepting a rematch from the same player seem like a bad idea since I’ll probably lose again anyways.

But analyzing the lost game and seeing all the moves I should have played instead makes me want to die.

We all know the character Joey from friends: super confident but not too smart. And probably the most of us are a little bit of a “Joey” while playing chess.

In the top half of this meme, Joey confidently played his white queen to a7 with a smirk on his face, expecting to mate his opponent very soon.

But then the black bishops swoops across the chess board from f2 to a7 to capture the white queen. Suddenly Joey realizes the big mistake he made.

Hikaru Nakamura is one of the strongest chess players in the world, and has won the US chess championship 5 times.

However, for the past two years he has semi-retired as a professional player and started to focus on his streaming career.

As a streamer, he often plays unusual openings and is not afraid to make spectacular moves.

So when Nakamura came back earlier this year to play professional chess again, everyone was expecting him to go back to the ultra safe and boring play style that you see with many grandmasters.

Instead, he surprised everyone by playing similar opening lines and aggressive moves over the board as he plays online.

Did you ever freak out because you suddenly noticed that one of your pieces is hanging, only to realize that it’s actually your turn and you can simply move the piece away?

It happens to me all the time as well.

In the first chess position the black queen is checking the white king. And since the white king is behind its own pawns, it looks like a back-rank mate at first sight.

Of course, this is clearly an emergency and any white player might cry for an ambulance when they see a back-rank mate.

But then the white player comes up with the tricky defensive maneuver Rd1! This is a discovered attack on the black king and queen.

Suddenly instead of white getting mated, it’s black that loses the queen instead.

So call an ambulance for black, not for me!

Another meme that perfectly shows how difficult it is to increase your chess rating.

It always feels like your rating drops by 100 points from just losing a single match. But it takes you a countless number of games to get those points back again.

Forks are some of the most commonly used tactics to win material.

But of course, if you fork two pieces you always have to make sure that your opponent’s piece can’t simply capture the forking piece.

In this case, even if you fork a king and queen with your bishop, your opponent can simply capture your bishop with the queen because they both move diagonally.

A knight in chess moves in a characteristic L shape, meaning it moves two squares horizontally and one vertical, or vice versa.

However, in this image the knight is placed in the center of a tiny 3×3 chess board. This board is so small that the knight can’t make any legal moves at all!

Of course, you can also find a lot of other hilarious captions to this image as well.

Although the game Among Us has passed it’s prime, the impostor memes have not!

Any chess player has a favorite opening that they like to play with the white and black pieces.

Playing 1.e4, 1.d4 and the Sicilian (another 1.e4 opening) are all perfectly fine opening choices.

However, as any experienced player will know, there is normally a huge rivalry between e4 and d4 players. Players that play one, rarely play the other.

So this meme is basically 1.e4 players making fun of 1.d4 players by saying their opening choice is bad.