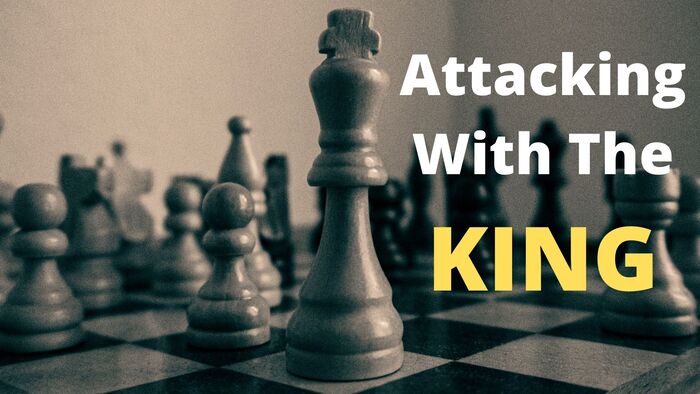 The king is the most valuable piece on the chessboard. Once your king is checkmated, you lose the game. So for most of the game you want to keep king safe and away from the action.

But the king is not a weak and useless piece either!

A king can attack and capture the opponent’s pieces on the chessboard, just like any other piece. The only difference is that a king can’t capture pieces that are protected, because that would place your own king in danger.

Let’s go into detail a little more and look at a few examples, so you can start playing attacking chess even with your king!

How the king moves and captures

The position below shows the white king on an empty chessboard. The king has 8 squares it could move to.

So the king can move horizontally, vertically, and diagonally, but only one square at a time.

Can the king attack backwards in chess?

Yes, a king can attack forwards and backwards in chess. The only piece in chess that can’t attack backwards is the pawn.

Can the king attack diagonally in chess?

Yes, the king can attack diagonally both forwards and backwards. Capturing diagonally counts as one move, not two moves.

In the position below, the white king can attack and capture either of the two black rooks diagonally.

Can the king attack while in check?

In the position below, the black queen is checking the white king. The white king can still attack the black knight and escape the check at the same time.

Can the king attack to get out of check?

If the king is checked by an opponent’s piece directly next to it, the king can capture that piece to get out of check. So moving your king is not the only way to deal with a check.

Can the king attack into a check?

No, a king cannot capture a piece that is defended, because that would place the king into a check. So in the positions shown below, the white king can’t capture the black rook on d5, because it’s defended by another rook on d2.

Can the king attack the queen in chess?

A king can take a queen in chess if the opponent’s queen is moved directly next to the king and is left undefended. However, the king can never approach or capture a queen on its own, since it can’t move close enough to an opponent’s queen.

The first important thing to notice is that the queen always keeps an eye out on the 8 squares directly surrounding it. In the diagram below, I illustrated this by highlighting these squares in red.

So as long as the black queen stays on the same square, the white king can never approach and attack it no matter how many moves you make.

You can attack and capture the queen if your opponent moves the queen next to your king and leave the queen undefended.

For more information, you can read the article on whether a king can take a queen.

Can the king attack the other king in chess?

A king can’t attack another king in chess. You are not allowed to move your own king into a check, so it’s impossible for your king to move close enough to your opponent’s king to capture it.

When two kings meet face to face on a chessboard, you get a situation that’s referred to as opposition.

In these positions, neither king can move forwards because that would place them in a check by the opponent’s king.

The diagram below shows what happens when two kings meet on the board. The kings can only move sideways or backwards, but they can’t directly approach each other.

So both the kings are basically staring each other down. Whoever moves the king first allows the opponent’s king to move forwards and gain ground.

For more information, you can read my article on whether a king can kill another king.