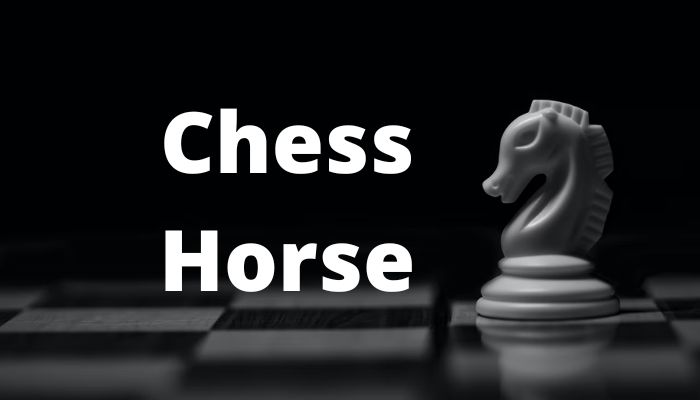 Among all the chess pieces, the horse is probably the first piece to catch your attention.

Unlike the other relatively abstract pieces, anyone can recognize the horse at first glance.

Let’s take a closer look at this unique chess piece and see how to move it.

What is the horse called in chess?

Although the piece looks like a horse, it’s actually called a “knight”. You almost never hear a chess player refer to it as a horse.

In some specialty chess sets, a knight is actually riding the horse. But in the standard chess sets, the knight simply looks like a horse’s head and neck.

The image below shows what a knight looks like in three different chess sets.

Why is the knight chess piece a horse?

When chess was introduced to Europe, the pieces were modified to suit the western culture and religion.

The horse maintained it’s shape, but people started to refer to it as a knight. Since knights were an important part in the royal court and feudal society.

But it’s interesting to note that this name change from horse to knight seems to be unique to the English language.

How does the horse move?

As you can from the diagram below, a horse that is placed in the middle of the board has 8 squares it can move to. While a horse in the corner can only move to two squares.

A common phrase you’ll hear in chess is that “a knight on the rim is dim”. And this is exactly why. A horse in the corner or at the edge of the board doesn’t have a lot of squares it can move to.

In general, it’s a good idea to move your horse towards the center, where they can have the maximum influence over the rest of the board.

Can a horse jump over other pieces?

The horse is the only piece in chess that can jump over other pieces. This includes jumping over your own and over the opponent’s pieces.

This makes it so fun to move the horse around!

In the diagram below, I highlighted all the legal moves for the white horse in yellow. As you can see, the white horse can jump over its own pieces and black’s pieces if it wants to move to the d6 or e5 squares.

The ability to jump over other pieces can make horses very tricky to deal with. You’ll often be surprised by knight moves from your opponent, because they are so easy to overlook.

However, you can use this to your own advantage as well. Don’t be afraid to jump over other pieces and into action!

Can a horse in chess move backwards?

Like most pieces in chess, the horse is allowed to move both forwards and backwards, as long as it follows the L-shape movement pattern.

Pawns are the only pieces in chess that are not allowed to move backwards.

As mentioned before, knights at the edge of the board aren’t very good and are at risk of being blocked in. So you normally don’t want to move your horse backwards unless you really have to. For example, when your horse is attacked by one of the enemy pawns.

However, in some case, it’s a smart to temporarily move your horse backwards to reroute them to a better square.

In the position shown below, the white horse on g4 has advanced to the 4th rank. But to be honest, it’s not really doing anything from that square. It is staring at its own e5 and f6 pawn, and the black king is preventing it from infiltration through h6.

Now would be a good time to move the horse backwards to e3, with the idea of eventually moving it to c4 followed by d6. From the d6 the white horse will be defended by its own pawn and target the weak f7 pawn in black’s camp.

Of course, black will try to stop you from achieving this goal if he/she realizes your plan. In that case, you might have to reposition the horse to a different square, such as b4 or g5.

For more examples, you can also read my article on chess pieces that can move and capture backwards.

How does the horse kill in chess?

The horse can capture enemy pieces by replacing them on their square. Which means if you move your horse to a square that already has an opponent’s piece on it, you can capture that piece and place your horse on that square.

However, keep in mind that capturing is not mandatory in chess. So the white horse can also choose to move to one of the 6 squares that are still empty.

The horse in chess is more commonly referred to as a “knight”. It can move in an L-shaped pattern and is the only piece that can jump over other pieces.

Horses can move forwards, sideways, and backwards, as long as they move in the L-shape.

Since the horse has such a unique movement pattern, it is great for forking opponent’s pieces and setting up tactical combinations.

If you liked this article and want to learn more about chess, you should also read my articles on how all the chess pieces move, and on who goes first in chess.