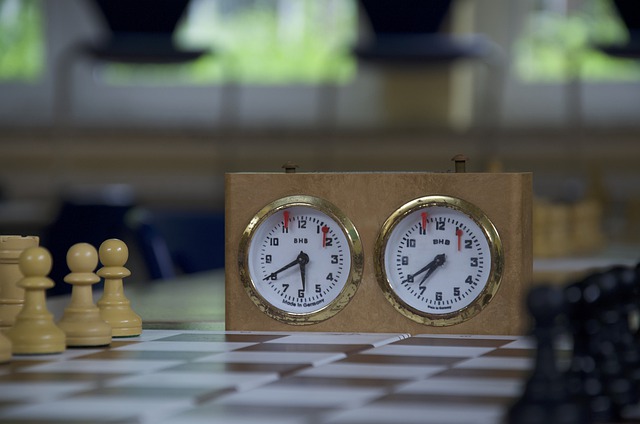 One of the biggest differences between amateurs and experienced chess players is the use of a chess clock.

It’s important to learn how to use a chess clock if you want to play serious games. Although not everyone likes it, the clock and time management are part of the game.

So let’s take a look at why chess clocks are used and how to play with one.

Why use a chess clock?

The purpose of a chess clock is to keep track of how much time each player takes for their own moves. Using a chess clock is an easy way to make sure either player doesn’t go over the agreed time limit.

To make the best move, you’ll have to carefully consider, compare and calculate several moves in your head. For most chess players, this is no easy task and can take a lot of time.

Of course, you don’t want a single game of chess to go on forever. So before the game starts, both players agree on a time limit.

In classical chess games, both players have more than 1 hour for the entire game, so you have plenty of time to think at critical moments in the game.

However, in blitz, rapid, and bullet games the time limit is set much lower, so the players often have to play one of the first moves that they think of rather than searching for the absolute best move.

In these time controls it’s even more important to use your time wisely, because you can easily lose a won game by running out of time.

For more information, also read my article on the different time controls used in chess.

How does a chess clock work?

A chess clock consists of two clocks that are linked together. When one clock starts, the other clock automatically stops. So at any given time, only one of the clocks is ticking down.

After every move you make, you press your side of the clock to stop your time and start your opponent’s time.

Both analogue and digital (DGT) clocks can be used. But the DGT clock is more commonly used nowadays.

On a DGT chess clock you can see exactly how many hours, minutes, and seconds each player has left. When one of the players runs out of time, their screen will blink all zeros or show a flag icon.

The analogue chess clock works a little different. You can’t see directly how much time you have left. Instead, you run out of time when the minute hand of the clock passes the 12. Then the little red flag between the 11 and 12 position will fall and you lose the game.

Although the analog chess clock looks great, there are many advantages of using a DGT chess clock instead.

First of all, a digital chess clock is a lot more accurate. You can set exactly how much time each player has. While on an analog chess clock you have to eyeball it. Moreover, on a DGT clock you can quickly see how much time you have left, without having to calculate. This is especially important if you are low on time.

Thirdly, DGT clocks come with a lot of commonly used preprogrammed time controls, so you can quickly start a new game.

Finally, in most cases the DGT chess clocks are also cheaper than the analog clocks.

So if you are planning on buying a new chess clock, I would recommend going with a digital one.

If you don’t know what time delays and increments are, you can read my article on time controls in chess.

Now that you know how the chess clock works, let’s look at the most important rules and etiquette when it comes to using a chess clock.

Some of these might seem obvious, but it’s important to be aware of them.

How do you play chess with a clock?

There are often two types of beginners. The first type constantly makes the first move that comes to mind and hardly uses time to think at all. The second type tries to find the perfect move in every position, and ends up in time trouble before even reaching the endgame.

Efficient time management is a crucial when playing chess with a clock. So here are some tips to help make the most out of your time:

What happens when your chess clock runs out?

If you play over the board and run out of time, you lose the game. However, your opponent needs to notice that you have no time left and claim the victory. If your opponent doesn’t say anything, you can simply continue playing.

However, if you are playing online, you’ll lose automatically if you run out of time.

The only exception is, if you run out of time but your opponent doesn’t have enough pieces left to checkmate you with. Then your opponent can only claim a draw.

This rule is especially important for short time controls such as bullet chess or blitz chess.

If you want to know which piece combinations are enough to checkmate, you can ready my article on checkmates in chess.

When playing with classical time controls, it’s sometimes considered rude if you try to win on time in a lost position. Therefore, some players may resign before winning on time, although there is no rule forcing them to do so.

Why do chess players hit the clock?

Chess players hit the clock to stop their own timer and start their opponent’s timer. A turn is not finished until a player made a move on the board and pressed the clock. If a player forgets to hit the chess clock he may eventually run out of time and lose the game.

What chess clocks are used in tournaments?