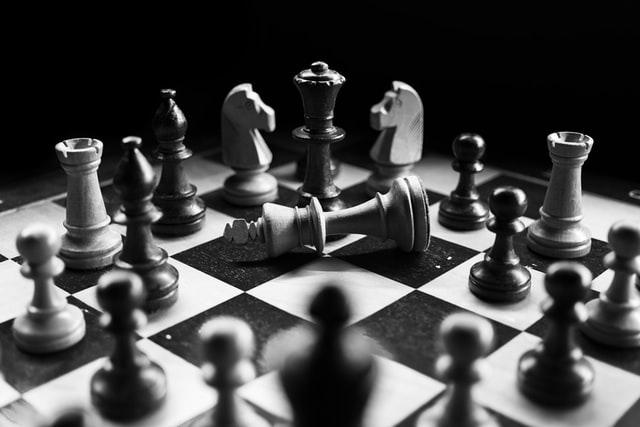 The goal of chess is to checkmate your opponents before they can checkmate you. Checkmates can occur in openings, middlegames, and endgames, so you should always keep your eyes open.

Many beginners have difficult with forcing a checkmate and might even end the game in a stalemate instead.

In this article, you’ll learn exactly what a checkmate is, we’ll go over all the basic checkmating patterns, and I’ll point out some tricky checkmates you have to avoid in the opening.

What does checkmate mean in chess?

Checkmate, often shortened to simply mate, is a situation in chess where a player’s king is in check and there is no way to safe the king by running away, blocking the check with another piece, or capturing the checking piece.

When you checkmate your opponent, you win the game and the game ends immediately. It doesn’t matter if your opponent could have checkmated you on the next turn as well.

It also doesn’t matter how many other chess pieces are still left on the board. Even if your opponent has several pieces more than you, you will still win if you can checkmate your opponent first.

You will often see strong chess players sacrifice several pieces in the attack to checkmate the opponent’s king. However, you carefully have to calculate if your sacrifice will indeed lead to a checkmate, because you will probably lose the game if it doesn’t.

Below, you can find three different checkmate examples. Notice how in each position the king is in check, and there is no way to safe the king by moving it, capturing the piece giving the check, or by blocking the check with another piece.

In the first position, the black king is checkmated by the white rook and bishop.

In the second position, the white king is checkmated by the black rook.

And in the third position, the white king is checkmated by black’s queen and bishop working together.

Check occurs when a king is under attack and threatened to be captured by one of the opponent’s piece. If your king is in check, you have to make a move that will get your king out of check. Checkmate occurs when there is no way to defend your king from being captured on the next move.

So the main difference between check and checkmate is whether you can defend your king. It’s a check if you can, and a checkmate if you can’t.

In the first position, the white king can simply move away to escape the attack by the black queen.

In the second position, the white bishop can move to a2 to block the check by the black rook.

And in the final position, the black queen giving check can be captured by either white’s king or bishop.

There are several similarities between a stalemate and a checkmate. In both cases, the king can’t make any legal moves.

The big difference between stalemate and checkmate is that the king is not in check in a stalemate. In a checkmate, the king is in check and can’t move.

Additionally, it’s not a stalemate if you still have other pieces that you can move. But a checkmate is a checkmate, regardless if you can move pieces besides the king.

The first position shown below is not a stalemate, because white can still move the h pawn. However, the second position is a checkmate, despite the h pawn.

For a more detailed explanation and lots of examples, you can read my article on stalemate in chess.

How to get checkmate in chess?

Checkmating your opponents is not easy. They will do everything they can to prevent a checkmate. To checkmate someone, you normally need a pretty big positional, strategical, or material advantage.

But even with an advantageous position, it’s not always easy to force a checkmate with a lot of pieces left on the board.

A good mating strategy for beginners is to trade off pieces. Checkmating becomes easier when the opponent has fewer pieces to defend with.

It’s like playing football. Playing 10 against 11 with one man down is difficult. But playing 1 against 2 is nearly impossible.

So if you have more pieces than your opponent, start off by trading some of your pieces for your opponent’s pieces.

However, you have to leave enough pieces left on the board to be able to checkmate.

If your opponent only has a king left, you can force a checkmate with the following piece combinations:

Additionally, if you have a king and a pawn left, you can force a checkmate If you can promote the pawn to a queen or rook.

Of course, just knowing which piece combinations can give checkmate is not enough. You also need to know the right technique. And the checkmating technique is different depending on the pieces left on the board.

You can find more detailed explanation on the basic checkmating techniques below.

The final step in getting a checkmate is to prevent a stalemate from occurring.

You need to limit the number of escape squares of your opponent’s king to give checkmate. But if you take away all of them, you might end up in a stalemate rather than a checkmate.

So always make sure that the opponent’s king has at least 1 square left it can move to, or else the game will end in a draw rather than a win.

Basic checkmates you need to know

If your opponent only has a king left on the board, you will need at least a queen, rook, two bishops, or a bishop and knight to give checkmate. These are the four fundamental checkmates because they illustrate the minimum material needed to force a checkmate.

If you have fewer pieces on the board, you can no longer force a checkmate and the game will end in a draw. For example, two knights and a king are not enough to checkmate.

On the flip side, if you have extra pieces, giving checkmate only becomes easier. So if you know these four basic checkmating techniques, you can give checkmate in any endgame.

It’s important to practice all these checkmates by playing against yourself until you can pretty much checkmate any endgame without thinking about it.

Let’s look at them one by one!

Checkmate with king and queen

Giving checkmate with a king and queen is by far the easiest, because the queen can move in all directions and the opponent’s king can never step close enough to the queen to attack it.

In general, you want to cut off the opponent’s king horizontally and vertically with your queen and slowly drive him into a corner.

Once the king only have two squares left to move back and forth between, you can bring your king over and give checkmate.

Checkmate with king and rook

However, a big difference is that a rook can’t move or capture diagonally. That means the opponent’s king can walk up to your rook and threaten to capture it diagonally.

To drive the opponent’s king in the corner, you’ll have to defend your rook with your king.

Once the opponent’s king is limited to a single file or rank, you want to place your king in opposition and checkmate.

Giving checkmate with two bishops is a little more tricky, because you can only prevent the opponent’s king from running away if your bishops are working together.

In general, you want to place your two bishops next to each other to drive the king to a corner. When the bishops are on an adjacent square, they also control adjacent diagonals and cut off the opponent’s king from one side of the board.

Checkmate with knight and bishop

Checkmating with a knight and bishop is the most difficult of all the basic checkmates because these two minor pieces don’t work well together.

Moreover, you can only give checkmate in the corner of the board that is the same color as your bishop.

Fortunately, this type of checkmate doesn’t happen very often, because finishing the game with a knight and bishop extra is pretty rare.

Checkmates normally happen in the middlegame and endgame. But if you make a silly mistake, you can be checkmated in just 2 moves!

Here are three of the fastest checkmates in chess that you should know, so you don’t accidentally get checkmated before the game even begins.

A typical Fool’s Mate could occur after the following moves:

The exact moves and can change a little. However, crucial for this checkmate is the open diagonal from e1 to h4.

The 3 move checkmate is a variant on the Fool’s Mate in which white gives checkmate on the third move. It’s basically a Fool’s Mate with reversed colors.

A typical example would be as follows:

This time, the black king is checkmated along the e8 to h5 diagonal. As a result, beginners are often advised not to move the f pawn in the opening, because it weakens the king a lot.

The 4 move checkmate is called the “Scholar’s Mate” and is very commonly seen in beginner’s games. The Scholar’s Mate involves a white bishop on c4 and a queen giving checkmate on f7.

There are several ways that the Scholar’s Mate can occur, but here is just an example:

Fortunately, there is no need to be afraid of the Scholar’s Mate. There are many ways to defend against his checkmate.

You now know all the checkmate basics that you need to know that start playing and winning your own games.

However, I often get the same questions after explaining what checkmate is and isn’t. So here are some of the most common questions.

Do you have to say check?

No, it’s not mandatory to say check or checkmate so most players refrain from announcing it. Moreover, saying “check” out loud can sometime be considered to be rude.

For more information, you can read my article on whether you have to say check in chess.

Does checkmate mean you win?

Yes, if you checkmate the opponent’s king, you immediately win the game. Even if your opponent has a lot more pieces left on the board than you.

Can you checkmate yourself?

No, moving your own king into a check is not a legal king move. You are also not allowed to move any piece that would expose your own king to a check. Therefore, you can’t checkmate yourself.

Can a bishop and king checkmate?

No, a single bishop and a king can’t checkmate the opponent’s king together. If there are no other pieces left besides the two kings and a bishop, the game is a draw.

Can a rook checkmate a king?

You can checkmate a king by using your own king and rook together. However, a rook can’t force a checkmate just by himself.

Can a knight checkmate a king?

Can you checkmate with two knights?

No, with correct play from both sides, you can’t force a checkmate even if your king and two knights work together.

Yes, two bishops of opposite colors and a king can work together to checkmate a king.