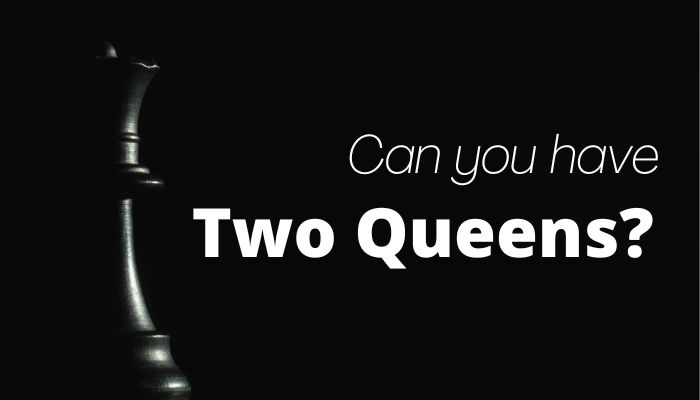 Did you ever look at your pieces on the board and think to yourself: I wish all of my pieces were queens?

If the answer is yes, I have some good news for you.

It’s possible to have two or multiple queens on the board at the same time. This is completely legal and happens all the times in serious games.

Of course, you can’t just replace all your pieces with queens when you are setting up the chess board.

Getting a second queen is a little bit more work than that. So let’s see how it’s done!

How do you get 2 queens in chess?

Everyone starts the game with just a single queen on the chess board.

But when one of your pawns reaches the other side of the board, this pawns can promote into a queen, rook, bishop, or knight.

So when your pawn reaches the last row, you can take it off the board and replace it with a stronger piece on the promotion square.

Your pawn is also allowed to promote into a queen if you still have your original queen on the board.

So from that moment onward you have two queens in your army.

In the position shown below, white managed to promote the a pawn, resulting in two white queens on the board.

In practice, obtaining a second queen when your opponent only has a single queen is almost a guaranteed win.

So your opponent will probably resign when you promote your pawn.

What if you don’t have a second queen piece

So you have managed to push one of your pawns all the way to the opposite side of the board and you want to promote it to a second queen.

And then you suddenly realize that your chess set only comes with one white queen and one black queen.

If you are playing in a tournament or at a club, you can probably borrow someone else’s queen.

But if you are playing at home, you can always use a prop to symbolize a queen, like a checkers piece or a meeple.

Once your real queen gets captured, you can replace the prop with the real queen piece.

How many queens can you have in chess?

Since you start the game with one queen and eight pawns, the maximum number of queens that one player can have on the board is nine.

But for this to happen, you’ll have to keep your starting queen safe and promote every single pawn.

Of course, that would never happen unless your opponent is actively trying to help you promote all your pawns. In most games, it’s already difficult to promote a single pawn.

I’m not even sure if anyone has every had nine queens on the board simultaneously in a serious match in chess history.

Promoting to other pieces

Although you want to promote your pawn into a queen in most cases, you do have the option to promote into a rook, knight or bishop as well.

You can learn move about it in my article on pawn promotion and underpomotion.

This means that you can not only have multiple queens, you could also have more than 2 rooks, 2 knights, or 2 bishops at the same time.

But normally, a second queen will help you win the game faster than a third knight.

You can have two queens on the board simultaneously if you manage to keep your starting queen safe and promote one of your pawns into a second queen.

You could even have 3, 4 or up to 9 queens on the board theoretically, but this hardly ever happens in serious games.

In some rare cases, promoting your pawn into a rook, bishop, or knight can be even better than a second queen.