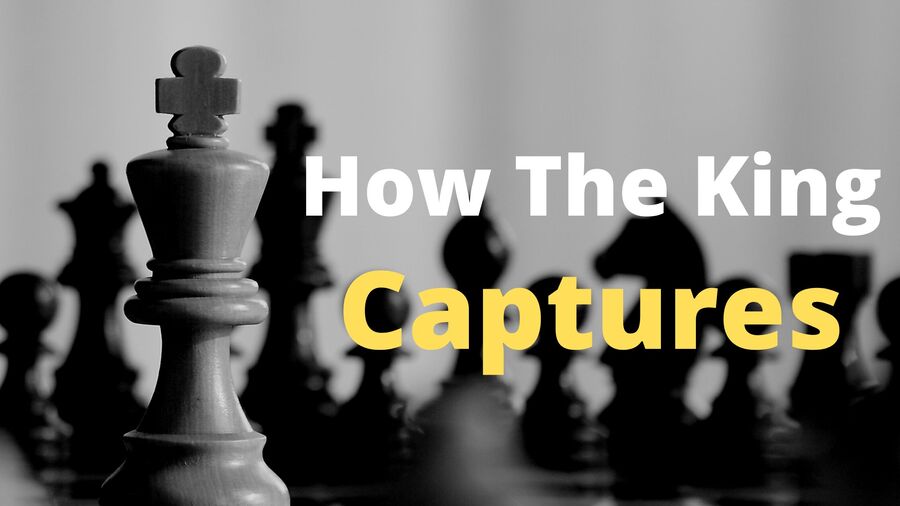 The king is the most valuable piece in chess. Once you are checkmated, you lose the game.

So you normally want to keep your king safe and away from danger.

But your king is far from useless!

Like any other piece, it can be used to attack and capture your opponent’s pieces.

Let’s take a look at how the king moves, how it captures, and which pieces it can capture.

If you aren’t familiar with rooks, you can read my article on how rooks move in chess.

How the king captures

If you move your king to a square that already has a piece of your opponent on it, you can capture that piece; the way the king moves and captures are the same.

This means that a king can capture horizontally, vertically, diagonally, and backwards by moving one square.

In the position below, the white king can attack and capture either of the two black rooks diagonally.

Can the king capture in check?

In the position below, the black queen is checking the white king. The white king can still attack the black knight and escape the check at the same time.

If the king is checked by an opponent’s piece directly next to it, the king can capture that piece to get out of check. So moving your king is not the only way to deal with a check.

Capture rules for the chess king

So now that you know how the king moves and captures, let’s look at the rules one more time:

Which pieces can the king capture in chess?

It’s impossible to capture a king with another king. But all the other pieces are fair play. Meaning that a king can capture pawns, knights, bishops, rooks, and queens.

Yes, a king can even capture a queen in certain situations!

But let’s start with the pawn.

Since pawns can only move one square at a time and attack two squares, it’s easy for a king to approach and capture pawns from nearly any direction.

Knights are also pretty easy to capture for kings. Knights move in an L-shaped pattern, so a king can approach horizontally, vertically, or diagonally.

Bishops are a little more tricky because they move diagonally. This means that a king can only capture a bishop horizontally or vertically.

Rooks are the exact opposite of bishops. Since rooks move horizontally and vertically, the king has to approach the rook diagonally to capture it.

Finally, we have arrived at the queen. I already said that a king can capture a queen. But it’s not easy!

The first thing to remember is that the queen can move in all directions, as shown below.

This means that a queen protects all the squares directly surrounding it. And as long as the queen stays on the same square, the king can never approach and capture it no matter how many moves you make.

For example, check out the three positions shown below.

The next three positions are different.

A king can capture other pieces in chess as long as the king doesn’t move into a check. This means that the king can also capture pieces to escape a check.

All the other pieces can easily be captures by the king, assuming that they don’t run away of course.

If you want to know more about the king, you can read one of the following articles: