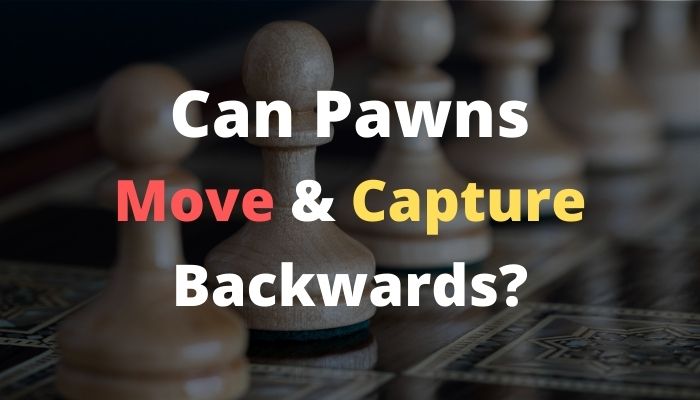 Most pieces in chess can move and capture both forwards and backwards. But pawns are an exception to this rule.

Pawns can only move and capture forwards and are not allowed to move or capture backwards.

This makes the pawn one of the most interesting pieces on the chessboard. Because you can never undo or retake a pawn move.

Let’s take a closer look at how the pawns move and capture in chess.

Can a pawn move backwards once it reaches the other side?

Since pawns can only move forwards, you might logically expect that the pawn can no longer move once it reaches the other side of the board.

But as soon as a pawn reaches the final row, it promotes into a stronger piece. Meaning you can replace the pawn with either a queen, rook, bishop, or knight.

Your pawn isn’t allowed to stay a pawn when it reaches the other side.

If you want to know more about pawn promotion, you can read this article.

How the pawn captures

Can a pawn capture diagonally backwards?

Similar to how a pawn can’t move backwards, pawns can also not capture (diagonally) backwards.

Since pawns can’t attack any pieces placed behind it, you always have to carefully consider if you really want to move a pawn forwards or not.

Moving pawns forward gives you control over new squares, but can also leave squares on your side of the board unprotected and vulnerable.

What chess pieces can you move backwards?

In that case, moving one of your pieces temporarily backwards can be a good idea.

For example, in the position below you can see that the white bishop on b2 is blocked by the enemy’s pawn chain. It’s basically looking at a concrete wall.

By moving the bishop backwards to c1, you’ll be able to move it to the other side of the board on your next turn, where it will be much more impactful during the rest of the game.

This means that pawn moves are permanent and can’t be undone by moving them back later.

So make sure that by moving your pawns forward you are improving your position, and not creating weaknesses for yourself.

If you want to learn more about chess, you might also want to read my articles on which pieces can move backwards, and how all the chess pieces move.