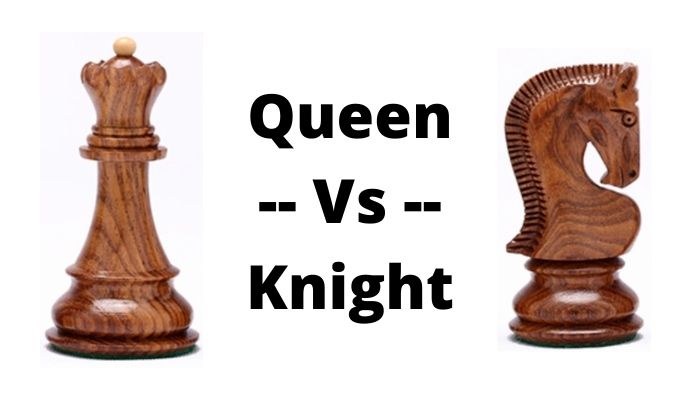 It’s not easy to remember how all the chess pieces move, because each piece moves differently.

And since the queen is the most powerful piece on the board, you might think that she can move like a knight as well.

But that is not the case: a queen can’t move like a knight!

Let’s take a look at why this is the case.

How the queen moves

The queen can move horizontally, vertically, and diagonally for as many squares as she wants, as long as no other pieces are blocking the way.

This means that the queen is the most mobile piece and as a result the strongest piece on the board.

You can learn more about how to move the queen by clicking here.

How the knight moves

This L-shaped movement pattern is very different from all the other chess pieces. Which makes knights so fun to play with and good at forking your opponent’s pieces.

As you can from the diagram below, a knight that is placed in the middle of the board can move to 8 different squares.

In the diagram below, I highlighted all the legal moves for the white knight in yellow. As you can see, the white knight can jump over its own pieces and black’s pieces if it wants to move to the d6 or e5 squares.

You can learn more about how the knight moves by reading this article.

Can a queen jump over other pieces?

A queen is not able to jump over other pieces like a knight. So when a queen meets another pieces, she has to either stop in front of it or capture the piece.

Of course, you can only capture your opponent’s pieces and not your own. So your queen’s mobility can be severely limited if she’s surrounded by too many friendly pieces.

In the diagram below, you can see that the white queen only has 7 squares it can go to (including the capture of the black pawn). The queen can’t move past or jump over any of the other pieces.

Although the queen is the strongest piece on the board, a queen can’t move in an L-shape like a knight. Moreover, you can’t jump over pieces with a queen like you can with a knight.

This shows how unique the knight is, because no other piece can do what the knight can.

But it doesn’t completely steal the spotlight from the queen either. Even without the ability to move like a knight, the queen is still the strongest piece on the board.

And if you compare how many points each piece is worth, you can see that the queen is still three times stronger than a knight.

But one important difference is that bishops can only move to other squares of the same color.

But since the queen can move diagonally and linearly, she isn’t tied to a certain color.

If you want to know more about bishops, you can read this article.

One big difference is that a rook and king perform a special move together called “castling“.

Although a queen can move like a rook, you can’t castle with a king and queen.

If you want to learn how the rook moves, you can click here.

Is a queen worth a rook and bishop?

If you look at the way a queen moves, you might have noticed that the queen can move like either a rook or a bishop.

So you might expect that a queen is worth the same as a rook and bishop combined.

But this is not the case. A queen is worth 9 points, while a rook and bishop together are only worth 8 points.

It turns out that having a single piece that can move both ways is just a bit stronger than having two pieces that can only move one way.

A queen is also much easier to use than trying to coordinate the two lesser pieces. And you can easily lose either rook or bishop through a simple double attack or fork.

A queen can not move like a knight. She can neither move in an L-shape nor jump over other pieces.

But even without the ability to move like a knight, the queen is still the most powerful piece on the board.

And although queens can’t move like knights, they can move like either a rook or a bishop.