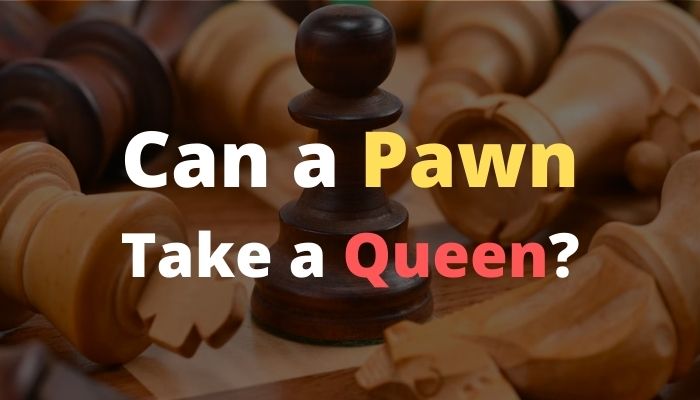 The pawn is the weakest piece on the board, while the queen is the strongest piece.

So you might be wondering if it’s even possible for a mere pawn to take out a queen.

And the answer is yes!

Pawns can capture queens just like any other piece, as long as the queen is close enough for the pawn to capture it.

However, in most games this doesn’t happen very often.

Let’s first take a look at how the pawn moves and captures to understand why it’s so rare for a pawn to capture a queen.

How the pawn captures

Capturing a queen with a pawn

Now that you know how the pawn moves and captures, it’s not difficult to understand that the pawn can indeed capture a queen under the right circumstances.

In the position below, you can see that the white pawn can capture the black queen by playing dxe5.

Your pawn can even capture a queen if the queen is giving your king a check. Don’t forget that you don’t always have to move the king when in check.

In the position below, the black queen is giving a check. Although white can move the king away or block the check with the queen, capturing the queen with the pawn is by far the better option.

Why can’t my pawn take the queen?

Although normally capturing a queen with a pawn is fine, there are some situations in which it would be an illegal move.

Let’s go over a few scenarios in which you can’t take the queen with a pawn.

First of all, you can’t take the queen if a different piece is currently giving a check.

In the position below, the white pawn can’t capture the black queen because the rook is giving a check.

Capturing the queen wouldn’t remove the check, so white has to deal with the check in another way first.

You also can’t capture the queen if your pawn is in an absolute pin.

Or in other words, you can’t take the queen if capturing it with the pawn would expose your own king to a check.

In the position below, the white pawn can’t capture the black queen because that would expose the white king to a check by the black rook.

Finally, you can’t capture a queen if it’s right in front of your pawn since pawns only capture diagonally.

If you are familiar with how all the pieces move, this won’t come as much of a surprise. But since it’s a common mistake among beginners, I thought it was worth mentioning.

So in the diagram below, the white pawn can’t take the black queen.

Why it’s so uncommon to see pawns capturing queens

As I mentioned in the beginning, a pawn can capture a queen in theory. But it’s incredibly uncommon to see in serious games.

If you attack a queen with your pawn, your opponent can simply move the queen to safety. And since a pawn only moves 1 square at a time and can’t even move sideways or backwards, it’s difficult for a pawn to chase down a queen.

Moreover, a pawn can only capture diagonally forwards. So if the queen is directly in front of the pawn, behind the pawn, or several ranks away from the pawn, you won’t be able to capture the queen.

If you do manage to capture the queen with a pawn, it’s normally because your opponent made a huge blunder. And your opponent will probably resign right away.

A pawn can capture a queen like any other piece. But it’s very common to see, because the pawn is so immobile and can only attack two squares at once.

Your opponent can easily move the queen to safety when it’s attacked by a pawn.

However, if you do manage to take the queen with a pawn, you are likely to win the game. So always be on the lookout for opportunities.

If you found this article helpful, you might also want to read one of these articles:

Can a pawn take a queen on the first move?

Can a pawn take a king or queen in chess?

A pawn can take a queen but is not allowed to take a king. Taking a king is actually an illegal move in chess. However, a pawn can check or checkmate a king.

I wrote a whole detailed article on this topic, which you can read by clicking here.