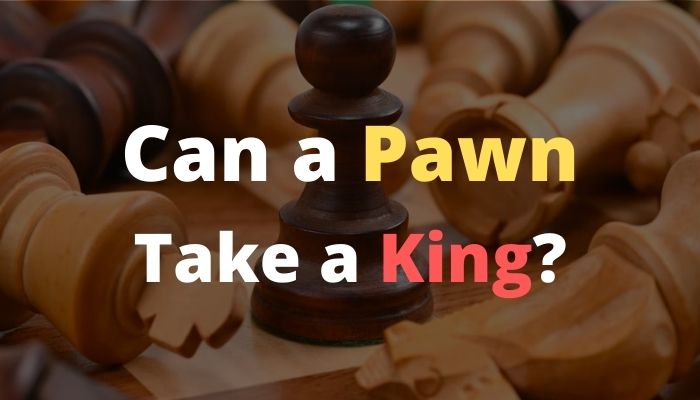 The goal of every chess game is to checkmate your opponent. And once a checkmate is on the board, the game finishes immediately.

This means that you can never take your opponent’s king, because the game always finishes one move before you have the chance to.

It doesn’t matter if it’s a pawn, bishop, knight, rook, or queen. None of these pieces can take or kill a king.

But you can checkmate a king with a pawn.

How the pawn attacks

Can a pawn checkmate a king?

Yes, a pawn can checkmate a king and deliver the final blow.

Since pawns are the least mobile piece on the board, a checkmate with one of the pawns doesn’t happen very often. But when it does happen, it’s normally quite spectacular.

Below you can see an example of a pawn checkmating a king.

Note that although a pawn is giving the final checkmate, it still needs the help and support of the other pieces.

Can a pawn checkmate a king on its own?

There are two important reasons for this.

First of all, if your pawn isn’t defended when it gives a check, your opponent’s king can simply capture the pawn. Since both the pawn and king can only move/capture one square at a time.

Note how in the position below, the black king can simply take the pawn that is giving the check, since it is not defended by any other pieces.

The second reason why a pawn can’t checkmate by itself, is because a pawn simply can’t cover enough squares simultaneously.

Even when your opponent’s king is driven into a corner and only has 3 squares to move to, your pawn can’t give check and cover the other 3 squares as well simultaneously.

If you want to checkmate with a pawn, your best bet is to push your pawn all the way to the other side of the board.

When this happens, you can promote your pawn into any other piece. And once your pawn promotes into a queen, it’s much easier to checkmate your opponent.

What happens when you take the king in chess?

Taking the king is technically considered to be an illegal move in chess. Remember that the goal of the game is to checkmate your opponent’s king, not to capture it.

If you are playing a classical chess game and you accidentally end up taking the king, there are normally two things that can happen.

Either you checkmated your opponent on your previous move, in which case you should have already won the game.

Or your opponent overlooked a check on the previous move and didn’t protect their king. This can sometimes happen because it’s not mandatory to say check.

In this case, you would both take back your last move and your opponent would have to make a legal move to defend the king.

However, if you play a fast time control such as rapid, blitz, or bullet chess, any illegal move can lose you the game right away. And you don’t get to take back your move.

This means that even if you checkmated your opponent on the last move and you took the king on this move, your opponent can claim a win.

Meaning you go from a victory to a loss within a single move.

So remember to NEVER take a king with any of your pieces.

You cannot take a king with a pawn, because taking a pawn with any piece would be an illegal move.

Depending on the time control, taking the king might even lose you the game instead of win it.

However, you can checkmate your opponent’s king with a pawn. As long as your pawn is defended and has sufficient support from other pieces to cover all the king’s escape squares.

And although you can’t capture a king, you can still capture the other chess pieces with your pawns.