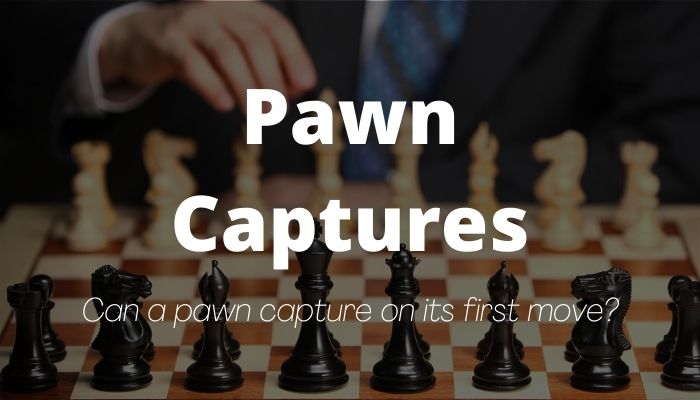 Pawns may be the smallest pieces on the board and worth the least points. But they are more complex than any of the other pieces.

There are move movement rules for pawns than any other piece. So it’s no wonder that many beginners get confused with this deviously simple looking piece.

Pawns are allowed to capture pieces on their first move, provided that one of your opponent’s pieces to close enough.

However, on the first move of the game it’s impossible for a pawn to capture anything, because your opponent’s pieces will be too far away.

Let’s take a look at how to move a pawn and when you are and aren’t allowed to capture with it.

How do pawns move

Pawns can move one square forward as long as they are not blocked by other pieces. But under no circumstances are pawns allowed to move backwards.

However, if another piece is in front of the pawn, your pawn is blacked and can’t move any further.

However, if you move a pawn for the first time, you can move it either 1 space or 2 spaces forwards, as long as there is nothing blocking the pawn.

Phrased slightly differently: white pawns on the 2nd rank or black pawns on the 7th rank can move either 1 or 2 squares forward.

The pawns on c2 and e2 also didn’t move yet. In principle, they should be able to move either 1 or 2 spaces forwards.

For more information, you can also read my article on how the pawn moves in chess.

How do pawns capture

Although pawns move forward, they can’t capture pieces directly in front of them. They can only capture one square diagonally forwards.

There is a special pawn move in chess called taking “en passant”. This is french for taking in passing.

This rule states that if white has a pawn on the 5th rank, and an adjacent pawn from black moves two squares from the 7th rank to the 5th rank, you have the option to capture it as if it only moved 1 square.

Similarly, if black has a pawn on the 4th rank and white moves an adjacent pawn two squares to the 4th rank, black could take this pawn as if it only moved 1 square.

This rule seems a little strange at first. So let’s look at an example. In the diagram below, white’s pawn is on the 5th rank and black decides to move his pawn two squares from e7 to e5.

Now the two pawn are directly next to each other. Normally, you wouldn’t be able to capture black’s pawn with your own.

However, thanks to the en passant rule, you have the option to capture black’s pawn, as shown in the two diagrams below.

However, there is a very important caveat here!

You can only capture en passant directly the next move after your opponent moves his pawn two squares. If you want to play a different move first, you won’t be able to take en passant in the future.

The en passant rule exists because in the original chess game, pawns could only move 1 square at a time. The rule that pawns can move two squares on their first move was added later to speed up the game.

However, this would mean that in some cases you would no longer have the option to capture your opponent’s pawn with your own pawn. Thus, the en passant rule was introduced.

It’s important not to confuse taking en passant with creating “passed pawns”. These are unrelated concepts.

You can read my article on passed pawns for more information.

Can a pawn capture on the first move?

A pawn can capture on its first move if one of the opponent’s pieces is close enough. However, the pawn can also move forwards one or two squares if you don’t want to capture.

For example, in the diagram below, it’s white’s turn and the pawn on d2 hasn’t moved yet since the beginning of the game.

So the white pawn can’t capture the black bishop on e4 or knight on f4.

Can a pawn move forward without capturing?

Since capture is not mandatory in chess, you can always opt to move your pawn forward without capturing, as long as your pawn is not blocked by another piece.

It doesn’t matter if it’s a pawn’s first move or if it has already moved before.

But you can’t move a pawn diagonally forward without capturing.

In the first position below, you can see how the white pawn can capture diagonally, move one square forward, or move two squares forward.

And in the second diagram, you can see how the white pawn on f3 can capture diagonally or move one square forward.

Of course, if you don’t want to capture or move your pawn, you can always move a different piece. But skipping a move is not allowed.

When can a pawn not capture?

You are not allowed to capture a piece with a pawn if that would expose your king to a check. Because you are never allowed to put your own king in danger.

If you are familiar with chess tactics, you know that this is referred to as an “absolute pin”.

In the position below, the white pawn isn’t allowed to capture the black rook or move forward, because that would expose the white king to a check by the black bishop on h7.

Can a pawn take a piece in front of it?

Pawns can only capture diagonally and are not allowed to capture pieces in front of it.

This means that once a pawn is blocked by one of your opponent’s pieces, you’ll have to drive away or capture that piece, before you can push your pawn forward again.

This sounds like a bit of a strange rule, but a game of chess would probably just be a game of captures if pawns could capture forwards as well.

The fact that pawns can’t capture other pawns directly in front of them often leads to static pawn structures. And pawn structures are one of the most interesting and important strategic concepts in chess.

Pawns can capture diagonally forward, regardless if it’s the pawn’s first move or not. But pawns can’t capture pieces directly paced in front of them.

The only time when a pawn isn’t allowed to capture, is if doing so would expose their own king to a check.

However, chess is not checkers. So captures are not mandatory. If you don’t want to capture a piece with a pawn, you are also allowed to move that pawn forward, or move any other piece.