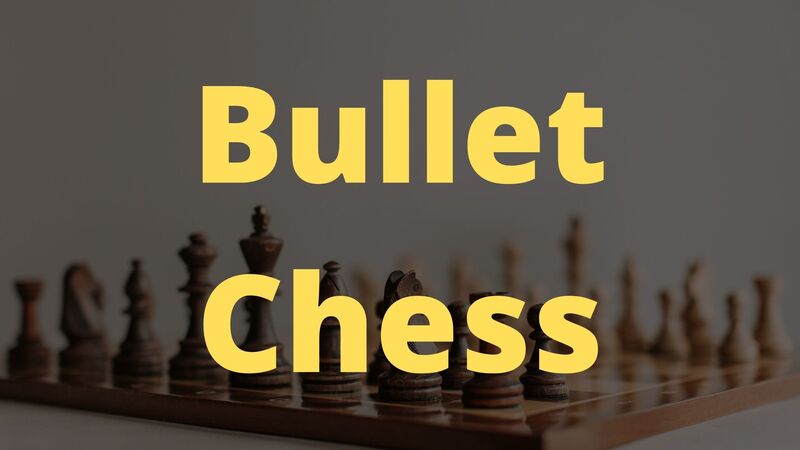 There are a lot of moments when chess can be super exciting. But waiting 15 minutes for your opponent to make a move is not one of them.

If you don’t want to wait very long, you can try playing with one of the shorter time control.

You have probably heard of classic, rapid, and blitz before. But bullet chess is even faster than any of these.

What is bullet chess?

Bullet chess refers to games in which both players get at most 3 minutes for the entire game. The names comes from the fact that you have to move your pieces almost as fast as a bullet or else you’ll lose on time.

Although bullet chess has been played since the development of modern chess clocks, it only started to become popular with the rise of internet chess.

Most chess websites let you “premove” before you opponent makes a move. This is almost an essential feature for bullet chess, because it lets you save those precious seconds you would otherwise waste on moving pieces.

Below you can see an example of bullet chess being played in person by two of the world’s best grandmasters:

The rules for playing bullet are the same as for a regular game of chess. The only difference is the time control, which is a lot shorter.

However, when playing bullet chess in person a common mistake that many newcomers make is to play the piece with one hand and pressing the clock with the other hand.

This is not allowed!

You have to use the same hand for moving pieces and pressing the clock.

In classical chess games this rule isn’t very important. So most players won’t even mention it.

But it can easily change the outcome of the game in shorter time controls such as bullet chess.

Moreover, if someone knocks over chess pieces, that player has to place the pieces back on the board using their own time.

Since you have so little time in ultra bullet, any kind of hesitation will lose you the game.

So bullet chess is faster than blitz chess.

Some common time controls for blitz include 3|0, 3|2, 5|0, and 5|5. As you can see, the time you start with and the increments are both larger than with bullet games.

If you are interested in rapid as well, you might also want to read my blitz vs rapid article.

Most people play bullet chess because they don’t have enough time to play longer games or because they think it more fun than slower time controls.

Moreover, having only a few seconds to play each move is sure to raise your heartbeat!

Playing bullet chess also has some additional benefits such as:

Is bullet chess good for you?

Although bullet chess is incredibly fun to play, it’s probably not the best time control if you want to improve.

Due to the time pressure, you won’t really have the chance to think deeply about any position or calculate complex tactics all the way through.

So your strategic understanding and tactical prowess are unlikely to improve a lot if you only play bullet chess.

By playing a lot of bullet chess, you might get into the habit of simply playing decent moves and trying to win on time, rather than finding the best move in each position.

So playing a few bullet games won’t hurt. But make sure to also play longer time controls if you want to become better at the game.

How to play bullet chess

All you need to play bullet chess is a chess board with all the pieces and a digital chess clock.

If you want to play bullet chess online, you have many websites to choose from, such as:

So here are a few tips and strategies to help you win more bullet chess games: