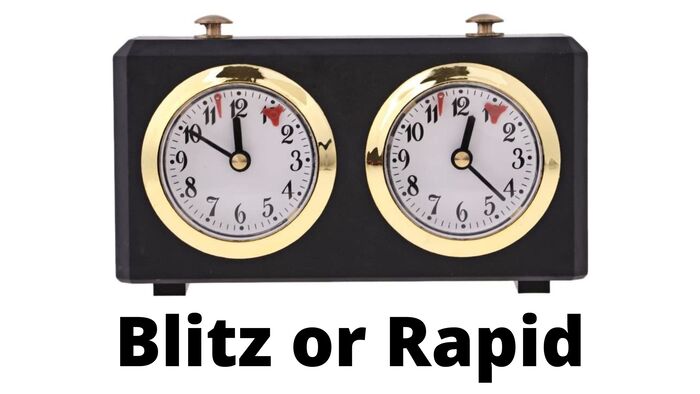 Blitz chess and rapid chess are both two different forms of “fast chess”. These types of chess games are played considerably faster and with less time on the clock compared to classical chess games.

Let’s take a look at how blitz and rapid chess are different, and which one you should play.

What is the difference between rapid and blitz chess?

The only difference between blitz chess and rapid chess is the amount of time on the clock. Each player gets between 10 and 60 minutes for a rapid game and less than 10 minutes for a blitz game.

All the other chess rules such as how to move the pieces, how to capture, castling, etc. are all the same.

However, outside these official FIDE events, a lot of different time controls can be used. If you want to know more, you can read my article on the most popular time controls.

But no matter what time control you are using, blitz and rapid chess games are a lot shorter than classical games, for which both players get at least 60 minutes.

Is it better to play rapid or blitz chess?

Rapid chess is better than blitz if you want to improve because you get to experience all facets of the game such as opening nuances, middlegame strategy, and endgames.

The problem with blitz is that you get little to no time to actually think about the moves you make. So you have to rely on your pattern recognition, memorized opening knowledge, and ability to quickly spot tactics.

Moreover, since the time plays such a big factor in blitz games, players are incentivized to play good moves rather than finding the best moves.

This is obviously a bad habit to pick up if you also play classical chess games.

When playing rapid chess, you start with a lot more time on the clock. Not enough to carefully analyze every move you make, but enough to use a few minutes during the most crucial moments in the game.

These moments when you slow down and actually calculate all the possibilities are exactly when you learn the most.

Should I play blitz or rapid chess?

If you are trying to improve, you should try to play longer time controls. Of course, the classical time control is the best for this. But sometimes you simply don’t have time to play a 4 hours game.

In that case, a rapid game would be fine as well. But try to stick to the longer rapid time controls. A good 30 minutes rapid game would often help you improve more than two 15 minutes games.

Blitz games aren’t as useful when you are trying to become better at chess. But they can be so much fun to play!

So if you just want to play a few fun games and you don’t care about getting better or improving your rating, why not play a few blitz games occasionally?

It’s best for beginners to stay away from blitz games until they have a solid foundation of chess knowledge.

As I mentioned before, if you play blitz you heavily have to rely on your pattern recognition and your experience. If you are a beginner, you probably have neither of these and end up playing random moves or simply lose on time.

Moreover, looking at each position for just a few seconds isn’t really enough to analyze it and understand what is going on. So you are unlikely to learn a lot from playing blitz.

But the biggest problem is that you can pick up bad habits if you start by playing blitz that will backfire when playing classical games, such as:

I’ve even heard some trainers say that anyone with a rating below 1800 shouldn’t play blitz at all.

I’m not sure if I agree with this. But you definitely want to play more rapid and classical games than blitz games as a beginner.

Why is my rapid rating so much better than blitz?

Your official rapid and blitz ratings should roughly be around the same level. However, if you play on online websites, your blitz and rapid rating can differ by quite a lot. This is mainly because the player pool for blitz and rapid is very different. Online blitz normally attracts a lot of strong players, so your online blitz rating is likely to be lower than your online rapid rating.

Does blitz make you better at chess?

A good training schedule for people trying to become better at chess may include a few blitz games, but should mainly consist of longer rapid and classical games. Blitz games might help you deal with time trouble, but won’t help you to deepen your fundamental understanding of the game.

Is blitz or rapid harder?

It is harder to play the best moves in blitz than in rapid due to the low amount of time on the clock. Therefore, blitz favors the player with a lot of opening knowledge, that has good chess intuition, and spots tactics quickly. If you are good at calculating but don’t have a lot of experience yet, rapid will be harder than blitz for you.