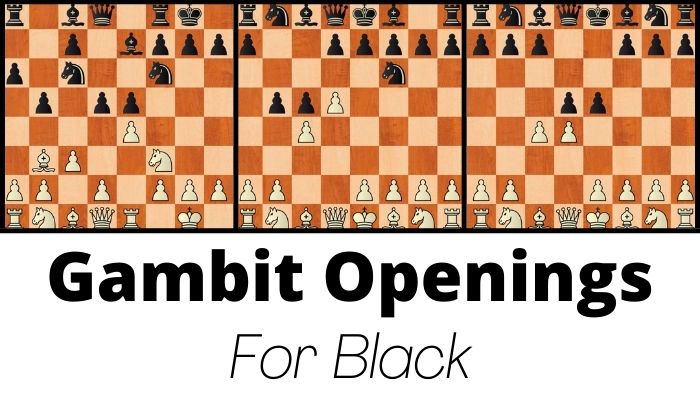 Gambit openings are a great choice if you like to play aggressive chess or want to surprise your opponent.

Unfortunately, most of the well-known gambit are only for white.

You can still play a gambit, even if you are playing the black pieces.

Here are the three best opening gambits for black that could be good additions to your opening repertoire.

Throughout this article, I’ll use algebraic notation and centipawn evaluations. If you aren’t familiar with these, consider reading my articles on how to read chess moves and the centipawn first.

The Marshall attack is one of the few gambits openings that is frequently played even at the grandmaster level.

Black has a lead in development and has stripped white of all the kingside defenders. Black will try to point all the pieces towards the white king and develop a dangerous attack.

The Stockfish engine gives white a slight advantage of 0.20 in this position.

The Marshall gambit has been very thoroughly analyzed and contains many dangerous lines.

According to Stockfish, this position is almost completely equal, with an evaluation of 0.07.

Below you can find a complete game played in the Marshall attack that will give a good example of how to play this opening.

The Benko gambit is another opening that grandmaster like to play in blitz and rapid games.

The Benko gambit appears on the board after the moves 1. d4 Nf6 2. c4 c5 3. d5 b5, where black is trying to undermine the white center by sacrificing a flank pawn.

In the resulting position, black has a strong bishop on a6 that controls the a6-f1 diagonal, is ahead in development, and can use the half open a and b files later on. Moreover, white has difficulty develop the f1 bishop.

The engine evaluates this position to be 0.96, which is a considerable advantage for white. But despite this, there are still over 1500 games of this exact position in the grandmaster database.

So perhaps you won’t beat a computer with this gambit, but it can be very effective against human opponents. Black’s plan is very simple to execute, while white has to play accurate to not lose the advantage.

At first glance, it seems like this line allows black to grab a lot of space on the queenside. But white can undermine black’s pawn structure sooner or later by playing a4.

The engine still prefers white in this position, and gives the position a score of 0.79.

If you want to see a complete game in the Benko gambit, you can play through this game below.

Although the Albin countergambit doesn’t appear very often in grandmaster games, it can still offer a lot of practical chances for players at the beginner and intermediate level.

Read this article to discover the difference between a gambit and countergambit.

The Albin countergambit occurs after the move 1. d4 d5 2. c4 e5, where black strikes back in the center right away.

Black’s pawn on d4 drives a wedge through black’s position and hinders the natural development of white’s pieces. However, black might not be able to win the e5 pawn and hang on to the d4 pawn in the long run.

Stockfish gives white a small advantage of 0.65 in this variation, but there are several opening traps that white needs to avoid early on.

White will be able to regain the c4 pawn by playing Ne5 or Ng5. And losing the right to castle is not a huge risk, since the queens have already been traded.

Black has a small advantage of -0.19 in this position according to Stockfish.

If you want to get a good impression of the Albin countergambit, you can play through the game shown below.

My favorite gambits for black are the Marshall attack, Benko gambit, and Albin countergambit.

In the Marshall attack and Benko gambit, black gives up a pawn for the initiative and a strong attack. While the Albin countergambit can be a great weapon to surprise queen’s gambit players.

Although the engine might give preference to white in most of these gambit lines, for the average chess player it’s not that easy to survive these gambits over the board.

If you like to play gambits, you might also want to check out these gambits for white.

For more classical openings, you can also read my articles on e4 openings and d4 opening.