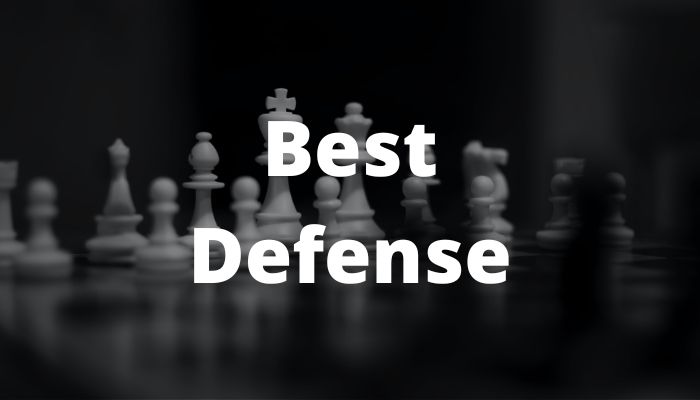 Most people prefer to play the white pieces because white gets to make the first move and has a statistically higher chance of winning.

But that doesn’t mean that you are completely helpless with the black pieces.

If you play a solid opening, you can quickly equalize out of the opening and start playing for a win.

Let’s take a look at the best defenses in chess that you can play with the black pieces.

The Sicilian defense is by far the most common defense against e4, and occurs after black replies e4 with c5.

The positions that arise from the Sicilian defense are very asymmetrical, which gives both sides good fighting chances.

So if you want to win with the black pieces, a Sicilian is always a good choice.

As you can imagine, there are many different variations in the Sicilian defense that you can choose between. And some variations can transpose as well, which makes it important to know the right move order.

Let’s look at the three most popular Sicilian defense variations.

By playing the move a6, black prevents the white knights from jumping to b5, which can cause a lot of problems in some lines.

Moreover, black delays the development of the b8 knights and will decide later whether to move it to c6 or d7.

By playing Bg5 white is attacking the f6 knights. In many variations, white ends up taking on f6 sooner or later and creating doubled pawns.

However, if black recaptures with gxf6, the four pawns in front of the black king form a pretty solid shield and black often doesn’t even castle.

In exchange, black normally gets an attack going on the queenside with moves such as a6, b5 and Qb6.

The major difference between the Sveshnikov and the other types of Sicilian defenses is the e5 pawn and backwards d6 pawn.

This gives white an obvious target on d6 and a good outpost on d5. However, this defense is surprisingly resilient and black can normally defend all the weaknesses in the position with the two bishops.

If you eventually manage to safely push the d6 pawn to d5 as black, you’ll normally gain a better position.

This is one of the oldest and most played openings in the history of chess. Obviously, nobody would still be playing this opening if it wasn’t one of the best defenses for black.

After finishing the development by castling, black normally tries to move the c6 knight to a5 or b8 and follow up by playing c5 to grab even more space on the queenside.

If you want a slightly more ambitious variation of the Ruy López, you can also try the Marshall attack. In this variation, you’ll gambit a pawn as black, but you’ll get a good kingside attack in exchange.

Check my article on the best gambits for black if you want to learn more.

The French defense is another very solid opening choice that appears on the board after the moves 1. e4 e6 2. d4 d5.

Although this opening gives black a very stable pawn structure and constant pressure on the white center, the e6 move also blocks in the c8 bishop.

From this position black will continue to keep pressuring white’s center playing moves such as Nbc6, Nf5, and Qb6 to attack the d4 pawn.

By playing both c6 and e6, black’s d5 pawn is very well defended and black has not weaknesses in the position.

However, on the flip side, black has very little space to maneuver the pieces and the Semi-Slav defense has a reputation of being drawish.

But if you absolutely can’t lose, the Semi-Slav is a great defense to choose.

Black will normally play b5 to kick out white’s bishop on c4 and follow up with the move Bb2. Your follow-up plan will then depend on how white tries to attack you.

The queen’s gambit is another popular opening that any experienced chess player has probably tried at one point.

Black normally declines to take the c4 pawn right away, because theory has shown that white can easily win back the pawn anyway.

From this queen’s gambit declined position, you could transpose to the Semi-Slav defense by playing Nf6 and c6 if you wanted to.

With this move, black keeps some more tension on white’s center and will play c5 as well at the right time to crush white’s center.

This is a modern opening approach in which black allows white to grab the center with the pawn initially, only to crush white’s center later on.

Positions from the King’s Indian defense are very asymmetrical, which gives both sides good winning chances.

However, the King’s Indian defense violates most of the standard opening principles, it’s not that easy to pick up as a beginner.

From this position, black will normally move the f6 knight out of the way and try to play f5 to attack white’s center.

And if white isn’t careful, black can often start a dangerous attack on the kingside by pushing the g and h pawns as well.

There are many defenses to choose from as black and the best chess defense depends on your personal style and what you are looking for.

If you want to play something super solid, you can play a French defense or a Semi-Slav defense and dare white to crack your position.

But if you want to play for the win, you’ll have to go with a more adventurous opening, such as the Sicilian defense or King’s Indian defense.